When it comes to properly dressing wounds, especially in children, there are lots of facts mixed with folklore. In this report by SADE OGUNTOLA, experts say that the use of methylated spirit and hydrogen peroxide for wound care could be harmful. 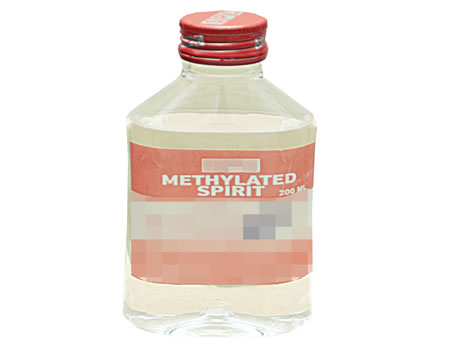 IT is common for many homes to keep a bottle of methylated spirit or hydrogen peroxide peradventure a child sustains bruises and small cuts when playing. They are usually kept in the household’s first aid boxes.

If fact, many people will recount their mothers and the nurse rushing to get the hydrogen peroxide or methylated spirit to stop bleeding from a scratched knee.

“I remember that dousing hydrogen peroxide, iodine or methylated spirit on a fresh wound always gives pain. In fact, children sighting a bottle of iodine will start to cry because it is linked with more pain after a fall,” recounted Mrs Adeola Hammed.

Mrs Hammed added “grown-ups usually have to hold down the child with wound before the nurse can apply iodine, hydrogen peroxide or even methylated spirit to the wound and then cover it with a plaster.”

Iodine, hydrogen peroxide or even methylated spirit is applied to remove debris from the wound and work to kill bacteria cells by destroying their cell walls.

The bubbling on the wound surface common when hydrogen peroxide is applied is believed by many to be caused by the solution attacking bacteria within the wound.

After years of research, experts warn that although iodine, hydrogen peroxide or even methylated spirit may be thought a first-line treatment for bruises and minor cuts, they can hurt. They end up slowing down the healing process and ultimately wound closure.

The days of using methylated spirit, iodine or hydrogen peroxide to flush a cut or scrape and then letting it air dry so it scabs, is over. So is putting ice, butter or aloe on a burn.

According to him, “there are so many things that people use for wound care that we are trying to discourage such as methylated spirit, iodine, hydrogen peroxide, brake fluid and engine oil.”

Dr Aderibigbe stated that hydrogen peroxide would start a bubbling action which helps remove debris from the wound and work to kill bacteria cells by destroying their cell walls.

“In the process, it also kills and irritates healthy skin and the wound bed, so slowing down the healing process,” he added.

He said the peppery form of iodine is discouraged because it is more corrosive and causes more pain and injury compared to Povidone-iodine that is still in use for wound care.

Rubbing alcohol is also not advisable to use for cleaning wounds. While it can take care of bacteria, it is almost certain to burn the skin as well. The burning effect can lead to swelling, itching and inflammation that can make the situation even worse.

Certainly, the use of methylated spirit, iodine or hydrogen peroxide is ageless. Dr Aderibigbe said “I will admit that at one point my mother might have used some of these things on me too, but knowledge keeps increasing. These wound care practices are being discouraged because we discover that they actually end up doing more harm than good.”

Moreover, in people on certain medications or diseases such as diabetes and rheumatoid arthritis with delayed wound healing potential, pouring hydrogen peroxide on their wounds even initially can drastically affect their chance of ever healing.

Dr Aderigbe declared that aside from these wound care products slowing down the healing process, often they are also sources of infection to the wound.

Moreover, he said the use of gentian violet as first aid care before seeking medical attention is also being discouraged. This is because it will prevent the doctor from a proper examination of the wound and prescribe appropriate care.

Also, the application of other things such as engine oil, brake fluid and pap to a wound is also better avoided.

He declared “when it comes to wound care, people think that going this other way makes it cheaper for them. Some also resort to self dressing of wounds or seek the assistance of people that are not knowledgeable about wounds. Their wounds will get delayed in healing.”

That old-school method – “airing out” the wound – to dry out the wound and the surrounding skin is not helpful too.

According to Dr Aderibigbe, “people believe that once the surface of a wound is dry, that it is healing up, but it is actually wrong. A wound should be moist. That is the medium that will allow new cells to grow.”

The standard in wound care is to always keep a wound covered and moist. The idea of “moist” wound healing has been shown by many clinical trials to heal faster than a wound that is dried out.

He added: “That is one of the reasons why the common practice of applying antibiotic powder, for instance, tetracycline capsules, to wounds to ensure it dries very fast is wrong.

“That the surface looks dry does not mean that the wound has healed. If you peel the scab, a dry, temporary crust off that wound, the face of the wound under will be reddish; some will even start to bleed immediately.”

A scab makes it harder for new skin cells to cover the wound. A scab can also trap inflammatory tissue and bacteria, which can lead to slower wound healing and a greater chance of infection.

The expert said it is also a misconception that a wound that is itchy is also healing well. For instance, the itching can also be a sign of an allergic reaction to the wound dressing or antibiotic ointment as well as an infection in the wound.

Basically, the body’s wound healing process is in five stages. Blood begins to clot and a scab begins to form. The white blood cells help to ward off infection and begin to repair the damaged tissue and any broken blood vessels.

Red blood cells create collagen to form a base for new tissue to grow in the wound. New skin forms over this tissue, and as the edges pull inward, the wound gets smaller. A scar forms, strengthening the area over the wound.

On a long-term basis, there is a myriad of wound cleansing options available to ensure good wound healing and closure. The best practice is soap and water or a saline solution made from a small amount of salt diluted in water.

For minor wounds, the wound should be cleaned with a copious quantity of warm, soapy water at least once a day and covered with a bandage that will not stick to the wound while it heals.

Auno: ‘How Boko Haram sneaked up on us, killed 30 and maimed many’

My husband’s only duty in the home is to beat, hit me like a goat —Wife

How wrong children’s shoes can cause deformity of a lifetime

Why baby walkers may do more harm than good—Experts

School resumption: How parents can prioritize their child’s eye health