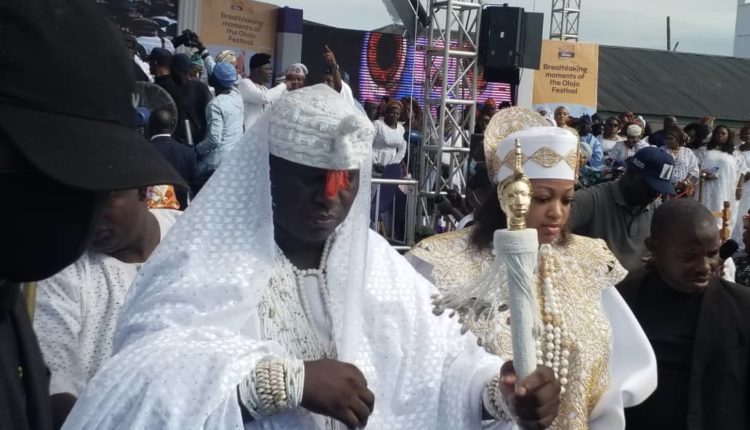 Share
Hundreds of people from all walks of life on Saturday stormed the palace of Ooni of Ife to celebrate the grand finale of the 2021 edition of the Olojo festival in Ile-Ife, Osun State.
The programme which started in the early hours of the day was characterised by varieties of activities ranging from different traditional performances like rendering of Yoruba poetries, invocation of deities, gods, and goddesses of the land among others.
The event which was turned into a carnival-like is a spectacle that provides a good understanding of Yoruba myth, history, beliefs, and the ceremonial significance of the ancient town of Ile Ife.
Speaking at the event, Ooni of Ife, Oba Enitan Ogunwusi prayed for the enhancement of the Yoruba kingdom, its unifications.and peaceful co-existence among the Yoruba people.
The monarch affirmed that the celebration of the event is meant to seek the faces of gods for the protection of the Yoruba within and outside the country.
The royal father who blessed all Yoruba sons and daughters from the country and in diaspora, charged them to always embrace their traditions, beliefs, and cultures wherever they might found themselves through their deeds, conducts, and dressings. 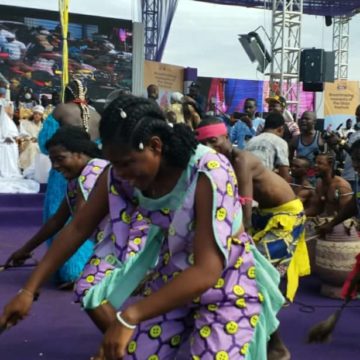 In his own speech at the occasion, the state governor, Alhaji Gboyega Oyetola described the event as historic and significant to the progress of the Yoruba race.
The governor who was represented by his deputy, Mr. Benedict Alabi, said, “this festival, which is regarded as the day of the first dawn, accentuates the place and the importance of Ile-Ife to creation and humanity. We must all, therefore, join hands together to celebrate it and accord it its rightful place.”
Oyetola who said, last year, our Government promised that the Yoruba Museum and the World Heritage Centre, the first of its kind, would be located in Ile-Ife, said, “to actualize this, the documents of the land allocated for the project have been handed over to me by the authorities of Obafemi Awolowo University, Ile-Ife, led by its Vice-Chancellor, Professor Eyitope Ogunmodede.  In no distant time, work will commence on the project.”
“When completed, the project will be a supporting tourism infrastructure for the Pilgrimage of Yoruba at home and in the Diaspora.”
“Our Administration strongly believes that State economy should be repositioned by giving a boost to cultural-tourism promotion with a view to driving meaningful youth employment, creating wealth, and preserving our cultural heritage, among others. Necessary moral and financial support will be given to the promotion of endowed cultural heritage”.
“Government will continue to do all within its power to protect the people, provide an enabling environment for a prosperous, secure and progressive Osun.”
“As we celebrate this year’s edition of the festival, I enjoin all and sundry to intensify efforts to preserve our cultural heritage, entrench peaceful-co-existence, eschew political bitterness, and always be our brothers’ keepers”.
” I congratulate His Imperial Majesty on the successful completion of the rites and the grand finale of this year’s festival. I thank the Ooni for his sacrifices and for interfacing with the ancestors to perform all the necessary cleansing, productivity, security, and other rites for the benefit of the black race in particular and  mankind in general.”
“This year’s Olojo festival happily coincides with the 30th anniversary of the creation of Osun State. I, therefore, enjoin us all to ride on the new platform offered by this year’s Olojo festival to resolve to build a stronger, safer, better, and more prosperous Osun”.
“Ile-Ife occupies a central place in the cultural heritage and importance of Osun. Let us continue to find new ways of developing our cultural heritage, including Olojo, to further make them become tourist attractions and foreign exchange-earners.”
Let us all resolve as we celebrate today to live together with our neighbors in peace so that the purpose of Olojo could be fulfilled.
“I would like to seize the opportunity to remind us that the deadly Covid-19 Delta Variant is still here with us. I, therefore, charge you to observe the protocols as you celebrate and to all to get vaccinated”, he concluded.