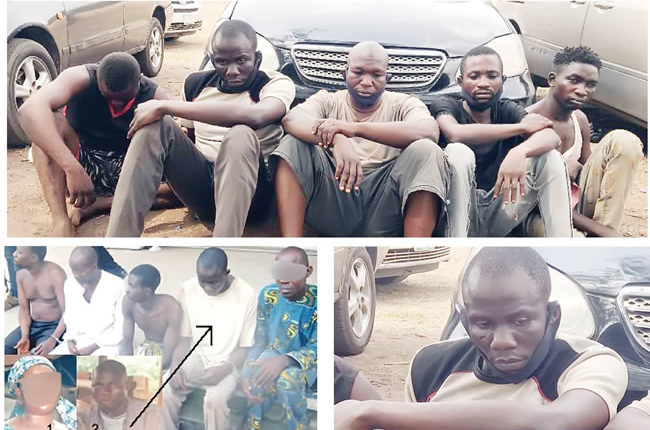 ONE of the five suspected members of a trans-border robbery gang paraded by the Oyo State police command recently was one Peter Taiwo. The role of the 40-year-old was to facilitate the transfer of cars snatched at gun point by the syndicate to the receivers. The receivers, in turn, would take the vehicles to their contact in Burkina Faso who would sell them to unsuspecting buyers in the neighbouring country.

On a closer look, Saturday Tribune discovered one thing: Peter Taiwo was the same person as Gbenga Taiwo, who was arrested in January 2013 for killing his lover, 36-year-old Kafilat Lateef, for money ritual purpose in Oyo town.

On February 10, 2013, a sister publication, Sunday Tribune, had published the story of how Gbenga Taiwo, now Peter Taiwo, called the woman, a widow with three children, whom he said he desired to marry, to Oyo town for a visit, only to drug her to sleep and then cut off her head to perform money rituals in connivance with native doctors and friends.

Before then, Taiwo had fled Ibadan for Oyo town after being declared wanted by the command for robbery cases. After his arrest and arraignment, he was released on bail for a capital offence in 2019. Shortly after his release, he changed his first name and decided to join ex-convicts he had contact with while in Abolongo Prison and started looking for receivers of vehicles snatched by some syndicate members, after planning with them on days of operation and where to bring the vehicles afterwards.

However, Taiwo, currently called ‘Pastor’ by his fellow ex-convicts and prison inmates, was arrested by the operatives of the monitoring unit of the command, led by CSP Sola Aremu on March 29, alongside four other suspects. A stolen car, two guns and 18 live cartridges were recovered from them.

The state Commissioner of Police, Ngozi Onadeko, had said during the parade of Taiwo and others that the syndicate had moved about seven cars to Burkina Faso for delivery to the receivers.

When Taiwo was arrested in 2013, it was learnt that his father, a pastor heading a church in Ibadan, disowned him over the robbery cases he was allegedly involved in, not knowing that his son would still commit more atrocities.

Saturday Tribune had an interview with Taiwo and some of the other suspects. He confessed that he knew the other suspects through one of the gang members, Bola, a.k.a. Omo Oye, who is currently at large and is also an ex-convict he met in prison.

“I am from Oyo town but I was born in Ibadan. On March 29, I called an Alhaji from Ilorin. I met him in Oyo prison. He used to receive cars from snatchers. I linked him with my syndicate members.

“One time, Alhaji sent some men to pick a vehicle. Our members had gone to snatch the car we wanted to give Alhaji. As I was waiting for them at a hotel in Ojoo, the police, who had arrested Alhaji’s boys, came with them to arrest me also. We went to meet Sheriff at Moniya and he was also arrested. I didn’t know the syndicate members. I only knew Bola who linked us.

“I met Bola in Oyo prison while I was there, and we met again in February this year at Sasa during the Fulani/Yoruba crisis. We exchanged numbers and he told me that he needed someone that would be buying cars from his gang. That caused me to contact Alhaji. I got N80,000 from Bola and Alhaji gave me N40,000.

“It happened in 2013. I was arraigned, went through trial for seven years but was granted bail in 2020. It was a capital offence but I don’t know how I got the bail. Two of those on trial with me are dead. Two others and I got the bail. However, the trial was still ongoing until my latest arrest. And I have never jumped bail.

“My return to crime was by the deceit of the devil. I didn’t join immediately I left prison. I met Bola who told me about getting buyers for snatched cars about two months ago. When I first returned, I went into farming. I also got people who helped me, and I went to Bible School but I started having this problem after having contact with Bola. I also met Salami Rasheed in prison.

On the lover killed for ritual

It is a thing of sadness for me, and I have begged God to bestow His mercy on me. This one that has just happened is the deceit of the devil. I shouldn’t have been found in such a thing again.”

“I was a meat seller before I was arrested and sentenced to a jail term. I came out of prison in 2020. I started selling Indian hemp when I left prison. It is true that we went for robbery. We went with a gun and two cartridges. The rest of the guns were recovered by the police when they arrested some of our members.  ‘Pastor’ (Taiwo) called us to say that he knew someone we could be selling snatched cars to. I didn’t know him directly. It was Bola, who is at large, who knew him first when they were in Abolongo prison in Oyo. Three of us – Afeez, Akeeb and I – went for the operation. We went to the receiver where he lodged in at Ojoo area to plan our movement. We left on a bike and saw the Toyota Corolla parked by its owner. That was how we snatched it.

‘How I ended up in prison’

“I was carrying an armed robber on a bike that I had when we were arrested. Initially, I didn’t know he was an armed robber. I was sentenced to four years imprisonment in Agodi Correctional Centre in 2016 and was set free in 2020.

“It was not as if I desired to commit crime, but my link with Bola came about when he used to repair generator. I think he learnt of my imprisonment and that was why he got hooked to me. He and ‘Pastor’ met in prison in Oyo. I was looking for an opportunity to get a means of living.”

“I am from Abeokuta in Ogun State but I was living at Elebu in Oluyole Local Government Area with someone who is like a sister. I have a child whom a lady bore for me and was a welder. My shop ran down

“I joined robbery gang because I didn’t have money or something tangible that I could survive on. At the end of February, Bola a.k.a. Omo Oye, called me and said he had someone who needed a vehicle. I later discovered he meant ‘Pastor’.

“I joined him sometimes but not always. He was the one who called me for the robbery operation that led to our arrest. He was also the one who gave me the two pistols to use.

“Whenever we operated, Bola was usually the one to drive away the vehicle after we must have snatched it. He paid me N60,000 the first time, and N70, 000 the second time before my arrest. I was arrested after the second operation I had with him.

“We wanted to go out for the third one when I was arrested. Bola called to tell me that there was an operation in the evening.

“As we were going, he wanted to hand over the guns to me. That was how we saw the police, which made Bola to hurriedly drop the bag with the guns and flee.”

‘What landed me in prison’

“One of my friends, a hunter, was being trailed by the police. I used to buy bush meat from him. He ran away when he was being hunted. Somehow I was arrested and I led the police to him. I was charged to court in 2016 and was sent to prison until April 2020 when I was released because of COVID-19.

“When I returned home, I had nothing again. All my equipment had been sold to pay for a lawyer’s service. Rejoining robbery gang was a grave mistake. I just thought that I suffered for what I didn’t do. I knew Bola through Sheriff.”

“I’m from Ago Are but I live in Saki. I am a driver. I bought a snatched vehicle. I was once paraded for the same offence and this was what took me to prison for a year. I collected two cars then. This time, I had received five vehicles before my arrest.

“I don’t know how the person who was buying the cars from me took them across to Burkina Faso. Once I collected a car from the snatchers, I would pass it to the buyer’s contact, who, in turn, would take it outside Nigeria to the neighbouring country. It was the devil’s work and it will not happen again.”

20 million girls have undergone FGM in Nigeria —Anita Abada, winner of WHO Film for Health campaign