How we lured our victim, killed him to get part of his wealth —Okada riders 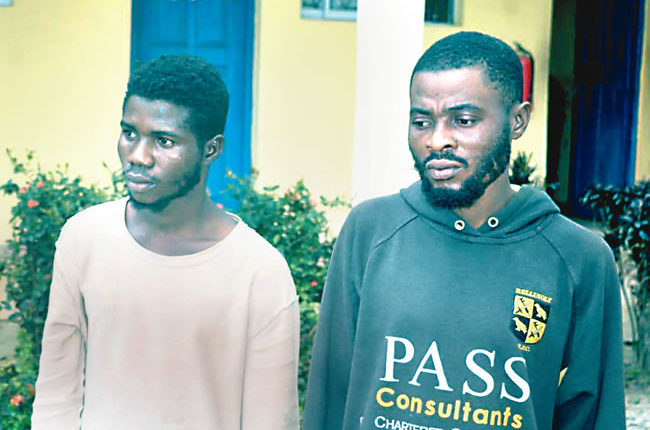 Two suspected killers of one Oguntade Wasiu have narrated how they lured him into a site in the guise of showing him a piece of land he desired to buy, killed him and took his motorcycle and mobile phone to have a share of the money they believed he was making from being a Yahoo boy (internet fraudster).

The two suspects, Wahab Ahmed and Adegoke Ayobami, were arrested by detectives in Osun State Police Command after the murder of Wasiu in August.

Nigerian Tribune learnt that Ahmed, an okada rider, was introduced to Wasiu through the latter’s friend, Sodiq, also said to be a Yahoo boy whom he (Ahmed) used to take to places he needed to go with his bike.

At a point, Wasiu told Ahmed that he wanted to purchase a bike and needed help from him, as advised by Sodiq, and also because he was familiar with such business interaction as an okada rider.

Wasiu was said to have later changed his mind, deciding to purchase a piece of land to construct a building on.

Before then, it was gathered that Ahmed had been sharing information about Ahmed with his fellow okada rider, Ayobami, simply called Ayo, about the wealth Wasiu had amassed through being a Yahoo boy, and the need for them to get their share of his money. Any discussion by Wasiu with Ahmed was always relayed to Ayo.

Wasiu’s intention to purchase a piece of land created an opportunity for the two suspects to strike, and they planned on how to lure him  to assess a phantom piece of land so that they could fleece him of whatever he had.

On the fateful day, Wasiu picked Ahmed on his personal motorcycle, told him that they would need to pick the man who wanted to help in the purchase of the land so that he would take them to the site.

This was done, and when they got to the place, they showed the available ones. They also advised him to scoop some sand from the one he preferred and take it to spiritualists to pray over it to know if it was the right one for him.

The Police Public Relations Officer in the state command, SP Yemisi Opalola, who briefed journalists on the suspects’ arrest, said that as Wasiu scooped the sand into a cellophane bag and turned to go, he was grabbed in the neck from behind and asked by his supposed friends to share part of his money with them.

However, his attempt to run away infuriated the duo, as they believed that if he should do that, he would expose them.

They were said to have inflicted machete cuts on him, killing him, after which they left his body in an uncompleted building.

Nigerian Tribune further learnt that when the deceased’s family did not see him, they went to Modakeke Police Station to report a case of a missing person. At the station, the wife was asked if there was anyone she suspected, and she told the police about her husband’s friend, Sodiq.

The police also went after Ahmed. Ahmed was said to have told a lie against Sodiq that he gave him a charm to kill Wasiu. He later confessed that he and Ayo killed Wasiu. The detectives were subsequently led to the site, five days after, where Wasiu’s decomposing body was recovered. The body was taken to the mortuary and a post mortem was done before he was released to his family for burial.

Ahmed, who gave his age as 26, told the Nigerian Tribune “I’m from Ifon in Ondo State, but I was born in Edo State. I learnt electronics as a vocation but I couldn’t get enough money to start. I went to learn tailoring in Modakeke. I used the money I got as a tailor to buy okada when the vocation was also not yielding enough money for me.

“I was involved in the killing of Wasiu. Ayo and I killed him. I knew Wasiu through one Sodiq. Sodiq told Wasiu of how I helped him to get a bike he gave out for commercial purpose and Wasiu approached me to do same for him. Later, he said he could not afford the purchase of a bike at that time, and asked me to help him get a piece of land, which he would pay for by instalments. We met in his wife’s shop and I asked him to call me whenever he was ready.

“On Sunday, at about 4:30pm, he called that he was set. Before then, I had told Ayo, a fellow okada rider, about all the discussions between me and Wasiu, and made him to know that Wasiu was a Yahoo Boy. He said that there was no problem; that we would find a way of getting money from him. It was Sodiq who made me to know Wasiu as a Yahoo Boy like him. Wasiu also used to tell me any time he made money from Yahoo (cybercrime) and the things he bought with the money. Before going for the land purchase, Wasiu told me that he had bought things worth N400,000 meant for the house he intended to build.

“I was with Ayo when Wasiu called me. Ayo said we should lure him to a site to get money from him and asked me to go and meet him. When we got there, we started showing him pieces of land which we made him believe were for sale. We told him to scoop soil from the one he liked and do spiritual findings on it if it was okay for him. As  he bent down to scoop the soil, Ayo held him by the neck, and told him that his life had been paid for. He started pleading for his life to be spared, crying out in agony. Ayo gave me the cutlass to use it on Wasiu but I was afraid. Wasiu tried to take the cutlass from me and it fell down. Ayo quickly grabbed the weapon and started inflicting machete cuts on Wasiu’s head. We left him and ran into an uncompleted building. We came out again, and Ayo noticed that Wasiu was still breathing. He then used the cutlass to slit his throat. We took his motorcycle and phone and kept them with Ayo. We planned selling it and sharing the money.

“When I got home, Wasiu’s friend, Sodiq, called me. He said I was the one his friend called before leaving his home and he had not been seen since then. I became afraid and didn’t know what to say. Sodiq said he called Wasiu’s number and someone picked it, saying that he had an accident along Ipetumodu road. I knew it was Ayo because he had the phone with him. I told him we would look for him the following day.

“As we were searching for Wasiu the following day, Ayo called Wasiu’s wife and said that the deceased was kidnapped and was with his abductors. That was how Wasiu’s family reported to the police who came to arrest me because I was the one he called last. That was why I confessed to conniving with Ayo to lure him to the bush and kill him. The police went to Ayo’s house, arrested him and recovered Wasiu’s motorcycle from his house.”

In his own confession, Ayo, aged 31 and married with two kids, stated: “I am a motorcycle spare parts trader and a commercial motorcyclist. I’m from Edunabon but I live in Modakeke.

“Ahmed and I knew each other through motorcycle riding business, but I saw Wasiu for the first time on the day we killed him. Ahmed told me our victim was rich  and we should find a way of getting money from him. He kept briefing me of his discussion with Wasiu. He told me he first needed a motorcycle, which was later changed to a piece of land. That was how we planned taking him to a site to dispossess him of his money. We never thought that he might not take money to the site, and we didn’t consider what would be done to him after we had forced money out of his hands.

“On the fateful day, I was picked on the way and three of us went to the site at about 4pm. He scooped the soil to enquire on it whether it was a right place and as he turned to go, I grabbed his neck from the back and told him his life had been paid for. He started struggling with me and Ahmed who held the cutlass started hitting Wasiu’s head with it.

“I collected it from him and started hitting him too. We left but later turned back when I was looking for a slipper. When we saw that he was still breathing and raising his head, I used the cutlass to slit his throat.”

He confirmed everything that happened afterwards as narrated by Ahmed.

Saying that it was his first time of committing such an act, Ayo started pleading for forgiveness. “The government should please forgive me and spare my life. I don’t want to be condemned over what I did,” he pleaded.

How we lured our victim, killed him to get part of his wealth —Okada riders

Slaves of passion: A generation driven by greed, instant gratification