Interview
By EBENEZER ADUROKIYA On Oct 18, 2020 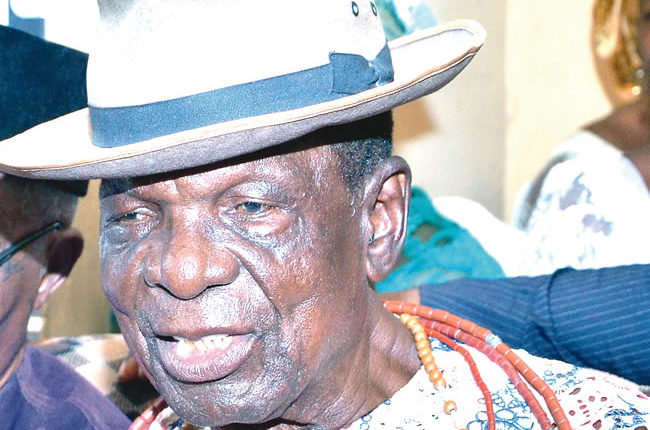 Chief Gabriel Ohwo is a retired Superintendent of Calabar Prisons under the Eastern Nigeria Government when the sage, Chief Obafemi Awolowo, was serving a prison term over trumped up sedition charges. The octogenarian elder statesman, who is a close but silent disciple of Awo, speaks to EBENEZER ADUROKIYA at his Warri home, Delta State, on Nigeria’s 60th Independence anniversary.

You’re an elder statesman and your generation is fond of saying that Nigeria used to be good in all facets. Looking at the trajectory of Nigeria at 60, are we where were supposed to be? Why, if you think we are not there as a country?

Well, I will say the little I know. Why the time of Chief Obafemi Awolowo was good was that Awolowo as a leader then wasn’t in politics for personal or monetary gain. He was in politics for the people. But those who came after him are using politics as business and that is the reason we have not achieved anything. I do not see much coming from people of today.

Why do you think so?

I said so because ever since, it has been money, money, money (money politics). In those days, you cannot be chosen to stand for a political position if you do not want to use politics to improve the lives of the people. Awolowo was everything; like some of his colleagues, he had the education; he was a lawyer; he was well-equipped as a leader. I couldn’t see Awolowo and would go back empty handed, I mean in terms of knowledge, in those days.

Are you saying that the crop of leaders we have nowadays are not qualified for political leadership in terms of knowledge?

But some of them are Ph.D holders?

Oh Ph.D holders! How did they get the Ph.D? The Ph.D didn’t give them the political knowledge. Well, people like you moving from place to place seeing the kind of people they ought to see maybe they will succeed, but it depends if such people are given the chance.

Do you think Nigeria has a future from the way things are going?

Yes, the future is not bleak. God works in a mysterious way. A person like you that are making efforts, intelligent and asking questions because you want to add to your knowledge and the experience you have shows there is hope. During elections, anybody who wants a political position comes to see people who are important because those are the people they think have the votes, because after going to them, those people will begin to gather the votes for them and they use money. For instance, look at a person like James Ibori, he was not a politician.  A long time ago, if you had interest in any political position, you usually would go for intensive interview, but now the case is different.

Looking at Nigeria from the prison sector where you held sway in your days, how would you review that sector vis a vis the change of name to the Nigeria Correctional Centre?

We have not done well.

Why do you think so?

Before the white people left us, they trained and appointed us to replace them in the management of the Nigerian prisons. What we were supposed to do was to follow what they laid down. As soon as they left, we kept it for a while, but the people that came after us did not keep to it.

When did this digression start?

Well, at the point where some type of people did not want people like Awolowo to be the president of the country. It was the time of JTU Aguiyi-Ironsi that they used soldiers to say that the politicians were not doing well then. They said they were going to stage a coup to topple the civilian government.

Do you think that if the military had not toppled the civilian government in 1966, Nigeria would have been better than it is today?

That’s true, but those who are saying so are using that argument to protect their positions, I mean what they did.

If you look deeply, do you think there is any area one can say Nigeria has achieved success?

What advice do you have for the current government of Muhammadu Buhari, because Chief Obasanjo was saying recently that the country is a failed state and if urgent steps are not taken, the country may collapse. Do you agree with Obasanjo?

No, because he does not know what he’s saying.

Why did you say so?

He is not a realist. He does not know what he is saying. He thinks because he was the head of state anytime he wants to talk they tell him to talk. Who is Obasanjo?

But he got support from some elder statesmen. For instance, Alani Akinrinade, a retired general, and Chief [Frank] Kokori all supported what he said that Buhari needed to be up and doing…

The person who knows what to do does not need anybody to tell him what to do.

What will be your opinion as per restructuring, do you think Nigeria should go back to regional system of government or what do you suggest?

Everybody wants to be on top as a leader.

As regards Nigeria’s 60th independence celebration, what is your advice to the citizenry and what do you intend to see about Nigeria in your lifetime?

That is not easy for me to say now, but God works in a mysterious way. The country has not failed because if we continue to say it has failed, it will fail.

You’re expressing optimism about Nigeria, some people no longer believe in Nigeria. What will be your advice to such people?