How sports can be used to tackle human trafficking, US Consulate General 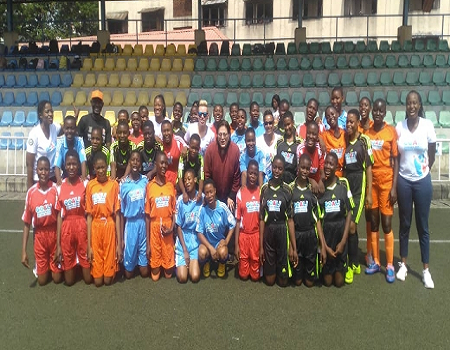 HOW sports can be used to tackle the rising cases of human trafficking of young Nigerian girls abroad was on the front burner yesterday in the Edo State capital of Benin.

Two American sports envoys, Staci Wilson and Joanna Lohman, former members of the U.S. Women’s National Team, alongside former Super Falcons goalkeeper Precious Dede engaged the public school girls in the programme which is devoted to the importance of employing sports in the development of leadership skills, promoting health and wellness, and encouraging academic success.

The Consular General said: “It is a programme we do all over the world. Every year, we choose several countries. This year, Nigeria is one of the countries chosen. We are very lucky to have two of our best known professional soccer players Staci Wilson and Joanna Lohman. They want to bring the message of sports and respect and strength to grow to role models. We want to show them that it is possible. It is a global thing we do all around the world every year. We choose different topics. This year in Africa, the topic that we think is so critical for Nigeria is the prevention of human trafficking.”

The envoy reiterated the U.S. government’s commitment to empowering at-risk girls with valuable life skills through their participation in sports.

Speaking in the same vein, Edo State Attorney General and Commissioner for Justice, Prof. Yinka Omorogbe said that through proper mentoring through sports, the young Edo school girls can excel by learning about teamwork, diligence, and discipline.

Super Falconets Coach Precious Dede said that besides mentoring, the programme also serves as a talent hunt as promising soccer stars will be identified and encouraged to take up a career in professional football.