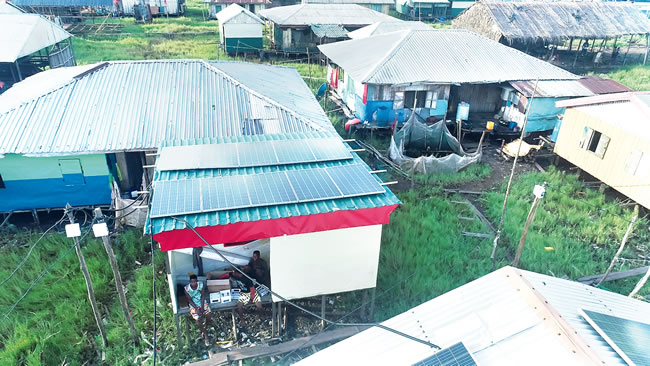 Over 85 million Nigerians do not have access to grid electricity, according to the World Bank, representing 43 per cent of the country’s population, making Nigeria the country with the largest energy access deficit in the world.

The World Bank revealed that the lack of electricity supply has significantly affected citizens and businesses, resulting in annual economic losses estimated at $26.2bn (N10.1trn), which is equivalent to about two per cent of the country’s Gross Domestic Product (GDP).

The World Bank Doing Business 2020 ranked Nigeria 171 out of 190 countries in getting electricity.

Rural and coastal communities are most affected, prompting over-reliance on power generators with their ever-rising costs and health hazards.

Many coastal communities in the Niger Delta area of Nigeria have been without electricity for decades. The people are majorly into fishing, which requires electricity for storage before selling. The people have waited for years without being connected to the grid. This has become a stumbling block to the growth of their businesses.

Steven Ibikunle, the founder of Philipcom Hotel, has been using generators to power his hotel, spending a huge amount of money on petrol.

“Before now, we were using a generator, and we used a lot of fuel as a result of that,” he said.

Tari Jackson, a fish farmer, who has been living in Fish Town since 2002, said she started drying fish in 2003.

“We are always drying fish every day and sometimes our fishes get spoilt because there is no electricity to keep them from getting spoilt, and as a result of that, we lose a lot of money”, he lamented.

To address this, the Foundation for Partnership Initiatives in the Niger Delta (PIND), a non-governmental organisation (NGO) established in 2010 with initial funding from Chevron Corporation to promote peace and equitable economic growth in Nigeria’s Niger Delta region by forging multi-sectoral and multi-stakeholder partnerships at the regional, national and international levels is facilitating off-grid, low-carbon, low-cost solar solutions to meet local needs through the Foundation’s access-to-energy intervention to spur improved economic development through cost savings for small businesses and households, as well as improved standard of living for residents of these off-grid, last mile, coastal communities.

Between 2015 and 2019, through its Access to Energy program, PIND assessed energy requirements and possible solutions for underserved coastal communities in the region and incentivised private renewable energy providers to develop business models specific to the last-mile customers, and fostered engagements between them and community stakeholders. This was done to secure buy-in for a demand-and-supply meet that assures long-term viability for the investors and boosts demand for renewable energy services.

The Access to Energy programme aims to provide access to affordable renewable energy for households and businesses to improve productivity, increase income, trigger new jobs, and improve the quality of life for residents of the communities.

At the end of 2020, 1,082 underserved and off-grid coastal businesses and households had gained access to clean energy technologies for the very first time through PIND’s energy interventions.

PIND’s Access to Energy Programme Manager Teslim Giwa said the energy cabins would provide reliable electricity to businesses and households in the communities.

“Many of the communities have never experienced grid connection and a lot of them are located in the periphery of the coastline. They have lived in communities for years without electricity. Some communities in the past enjoyed stable electricity through localised energy systems as they have benefitted from wealthy individuals who donated generators to serve the communities,” he said.

“We were able to convince communities to adopt the new solar system to generate electricity in their communities,” Giwa said.

Ibikunle has now acquired solar electricity for his hotel.

“The solar light is helping a lot. I used to use about two refrigerators before, but now I use three and all my systems are working very fine,” he said.

“We love it and we are enjoying it,” he said. “Before the solar came, we had generators in this community, but due to the condition of fuel, we could not power the generator. Solar is with us and what we do is to recharge the solar. We love the solar here a lot, and we would want the solar to stay. So, I thank the people that have brought this solar to the community,” he concluded.

The Executive Director of PIND, Tunji Idowu said the energy cabins would increase the productivity of businesses in the communities and enable them to earn more income, adding that the communities can retail the solar energy at a competitive rate to a diversity of small and micro-enterprises within those rural areas.

“As the access to energy is arguably the holy grail of development, these installations allow a diverse group of beneficiaries in the communities to address basic energy needs and productive uses of energy at both household and rural enterprise levels. These will afford such typically agrarian and fishing communities to experience direct value addition to fish and agricultural produce while newer service industries are likely to emerge”.

He also expects that the installations would serve as community hubs and integrators that facilitate electricity uptake for traditionally recognised rural livelihoods, and potentially large employers of rural people.

“We further expect them to create a new set of livelihood opportunities while simultaneously providing a platform that can support other parallel community development interventions,” he said.

Less than 3% of Nigerians have insurance policies —Insurance expert

Africa and Climate Change: A Conversation with US Senator John Kerry towards COP27