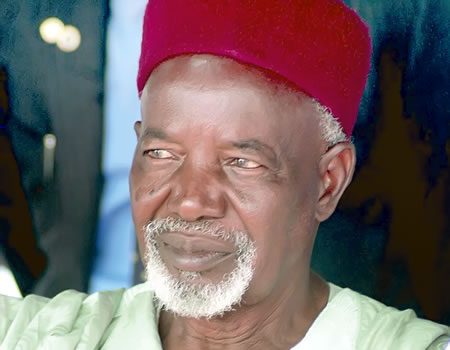 FORMER governor of Kaduna state, Alh. Balarabe Musa has observed that the defection of Senate President, Bukola Saraki to all the Peoples Democratic Party (PDP) will affect the fortunes of President Buhari and the All Progressives Congress (APC) in 2019.

The former Governor who was speaking on the defection in an interview on Wednesday warned that Saraki’s defection will seriously affect President Muhammadu Buhari and the APC during the 2019 general elections.

Recall that Saraki had on Tuesday officially renounced his membership of the ruling APC to join the opposition Peoples Democratic Party( PDP).

The National leader of the People’s Redemption Party (PRP) said that the ruling APC was in “greater trouble,” as Saraki’s exit signified the “demise” of the party.

According to him, “Saraki’s defection from APC was much expected and the party is in greater trouble now because his defection signifies the demise of the APC in spite of whoever remains now in the party.

“The consequences of this defection for the country and the party can only be imagined.

“Saraki’s defection will seriously affect Buhari, the party and the country in 2019, but if it can be managed, is also a different thing which we wait to see. This resignation is not something that can be dismissed except its that of an ordinary charlatan.

Nigeria’s former president, Chief Olusegun Obasanjo, on Thursday, said the country is presently divided because people are deprived socially and economically. He, however, promised to support any Nigerian who would take the country to the promised… READ MORE

Certain chieftains of the All Progressives Congress last night met with the national chairman of the party, Comrade Adams Oshiomhole at the party national secretariat. Those who met with Comrade Oshiomhole to discuss the set back suffered by the ruling party at the national assembly included Senate Majority… READ MORE

Top musicians, Tiwa Savage and Yemi Alade have increased their rivalry by unfollowing each other on Instagram.  After Goldie died, one thought the episode united female artistes in the country, but recent events are apparently changing… READ MORE

SENATOR Dino Melaye was on Wednesday arraigned in an FCT High Court, Apo, on a six-count charge, bordering on attempted suicide, attempt to escape from custody and damage of police… READ MORE