by Tribune Online
in Features
Reading Time: 6 mins read
A A 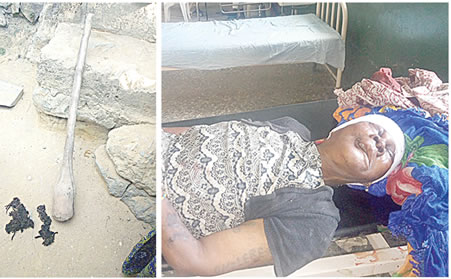 Two septuagenarians were gruesomely murdered in Ikare Akoko, Ondo, last week by suspected ritual killers HAKEEM GBADAMOSI reports the effort of the community leaders and security operatives in bringing the perpetrators to book.

The Okeegbe community of Ikare Akoko in Akoko North East local government area of Ondo State, was thrown into confusion as many residents wondered reasons behind the gruesome murder of a 72-year-old grandmother, Modinat Ala, by suspected ritual killers, who not only killed her but removed vital parts of her body.

Apart from the killing of the grandmother, another 75-year-old tenant of Ala, Mrs Awawu Abdul Karim, who noticed movements in the house in the wake of the night was also hacked to death as she was hit with a pestle on the head.

According to one of the residents of the area, if Madam Ala had inkling of the plans of her assailants who visited her in the middle of the night, perhaps she would not have opened the door to attend to the suspected ritual killers.

She said the septuagenarian, a petty trader, who operated a stall in front of her residence, E/97 Okeegbe Street, Ikare, usually attended to customers even in the late hours of the night after she would have closed for the day.

She explained that those who carried out the evil act had studied the old woman and used the opportunity to carry out their act unhindered. She added that the suspected ritual killers had rehearsed their plans and wasted no time in killing the woman, mutilated her body by removing vital organs, such as the heart, breasts,  private part and other organs.

“It is apparent that the hoodlums had been monitoring the old woman for a while and from the way they carried out the killing, it is clear they lived around this community,” she stated.

Nigerian Tribune gathered that the suspected ritual killers killed the tenant of their victim who noticed strange movements within the house. It was gathered that Awawu came out from her room to know and inquire about what was going on in the house.

The suspects, who were busy struggling to remove the vital organs of Ala, noticed Awawu coming from her room and did not hesitate to hit her with a pestle after which she fainted immediately. She was still unconscious early morning when the mutilated body of Madam Ala was discovered; she was later rushed to a private hospital after which she was taken to the State Specialist Hospital, Ikare where she was given first aid before being transferred to Federal Medical Center, Owo for better treatment as her injury was said to be severe. 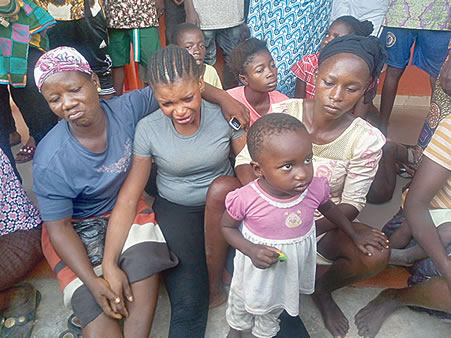 It was gathered that her children, however, decided to take her to Federal Medical Centre (FMC), Okene, where she was said to have been pronounced dead. A neighbour of the victims also disclosed to Nigerian Tribune that the four-year-old grandson of the murdered Ala, Dada, who was living with Madam Ala, also fell victim of the suspected ritual killers, as they shaved his dreadlock and took away his hair.

The killings have, however, sparked among among the youths of the community, just as they have started protesting the killings of the two innocent and harmless grandmothers. The youths have demanded immediate investigation into the gruesome murders.

The leader of the youths, Kabiru Adeleke, expressed shock over the deaths of Madam Ala and Awawu describing the two women as friendly, easy going and loved by all and could not fathom the reasons they were the targets of the suspected ritual murderers.

He noted that such incident was becoming very rampant in the area. He disclosed that no fewer than three mentally challenged women had been killed in the same manner in the community within a month, without the community leaders questioning the murders of these mentally deranged women.

“I want to call on our community leaders to beef up security in this area. This crime is alien to our people and we need to watch out for strange people here. I am sure that within the next couple of weeks, the perpetrators of this act will be brought to book. We know what our fathers can do and we want them to swing into action, rather than waiting for police investigation. We need our peace in this area. If we don’t take decisive steps, these boys will kill us one after the other in this community. They started with mentally deranged people, and they have graduated to using normal people,” he warned.

Reacting to the development, the Owa Ale of Ikare, Oba Samuel Adegbite- Adedoyin, described the killings as alien in the community.  According to the traditional ruler, the killing of the septuagenarians justifies his call for state police.

Oba Adegbite -Adedoyin argued that “it’s rather unfortunate and anathema to the cause of Ikare people which must be condemned in its entirety and I hope the law enforcement agencies will get to the root of the matter.”

He maintained that state policing is the only way the security of lives and property can be assured saying that “there are many advantages of state policing, known as community policing in some societies. A policeman is expected to know the nook and cranny of his society as well as the people of the area. So, if you bring someone from Kaura Namoda or Port Harcourt who doesn’t know the terrain of this area or even speak the language, policing effectively would be difficult for such person.

“In the western world, police don’t have settlements, they live among the people, they know the criminals within but here, they fence an area and call it police barracks. How will officers know the terrain of the community they are policing?

“Although some people are of the opinion that politicians may abuse their usage, or misuse them, especially for election purposes, but one has to weigh the advantages against the disadvantages.

“Gone are the 1960s when social and educational systems were low compared to now where you have an average of three graduates in a family; so people now tend to know their rights.”

Meanwhile, men of the Ondo State police command have arrested one Moses Olaniyi, over the killing of the two septuagenarians. The state Police Public Relations Officer (PPRO), Femi Joseph, who confirmed the arrest of the suspect said the killing was perfectly done because the assailants opened the door to the deceased’s room and after the dastardly act, they closed the door and left the house without any hindrance. He said the hoodlums who killed the two women cleverly opened the doors leading to the house and carried out the operation unhindered.

Joseph said the incident was reported by one of the deceased’s son, Abiodun Ala, who explained that her mother was killed in the night while some vital organs were also missing. He said policemen from the town swung into action and visited the scene of the incident, disclosing that a suspect, Moses Olaniyi, who lived in the house, has been arrested

He said the underage grandson of the late Ala who was earlier taken into custody has been released but investigation has begun. He however assured that detectives from the command would soon bring the hoodlums to book and disclosed that “we have arrested one person and we have begun our investigation. We shall get to the root of the matter.”