Agriculture
By Justice Nwafor On Apr 6, 2021 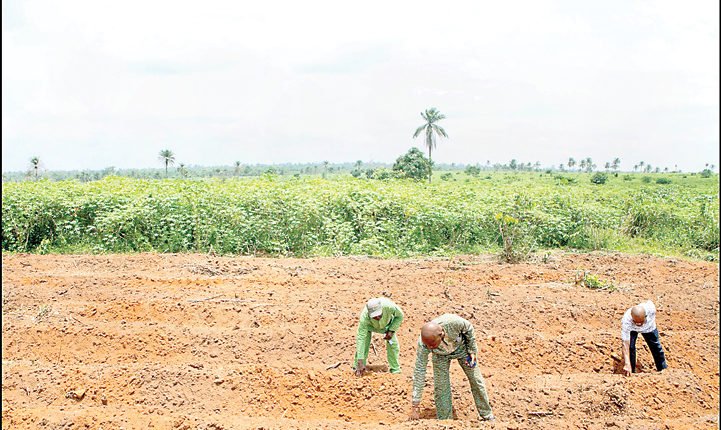 ACCESS to arable land is one of the biggest challenges smallholder farmers face in Nigeria, especially in the maritime states of the Niger Delta. As of 2018, data from the World Bank revealed that Nigeria’s percentage of arable land to the total land area was 37.3 per cent. And, of course, with the constantly growing population, access would continually shrink, with the poor smallholder farmer being the most affected.

For the smallholder farmers whose livelihoods are partly or entirely dependent on agriculture and based on a traditional production system, land plays a pivotal role in shaping and directing livelihoods and lack of access to farmland may cause multiple livelihood difficulties. In a society like Nigeria’s, where agriculture is more market-oriented, in which family farming — a means of farming managed and operated on family labour — provides a principal source of employment, generating the income with which to buy food, access to arable land has far-reaching implications.

So, when the Foundation for Partnership Initiative in the Niger Delta (PIND) called for a high-level stakeholder roundtable to discuss the way forward, it was well-received. The roundtable had stakeholders from the agricultural value chain, including traditional rulers, a lawmaker, the Delta State Commissioner for Agriculture and Natural Resources, Julius Egbedi, and other key players in the agric value chain in Niger Delta, especially from Edo, Delta and Ondo states, gather in Asaba, the Delta State capital, on March 30, 2021.

The goal was simple: influence critical stakeholders to understand the issues, coordinate platforms to promote awareness and rally them to collaborate to take relevant actions to address the binding constraints.

For Chuks Ofulue, PIND’s Advocacy Manager, who spoke enthusiastically while giving the opening remarks at the event, there’s more to the poor access to land than meets the eyes: it stifles growth, productivity and impoverishes the region’s already poor smallholder farmers, denying them chances of having better lives. While the right access will improve the quality of life for them and their families.

“We know that access to land is the fundamental means whereby the poor can ensure food supplies to meet and generate income through production and processing as a means of livelihood”, Ofulue said.

“Yet, access to arable land remains a major constraint to the increased productivity of small farm holders in Nigeria, particularly the Niger Delta. As you know, Niger Delta suffers from a shortage of arable land based on the fact that it is surrounded by water.”

The roundtable, while PIND made sure participants observed the NCDC prescribed Covid-19 protocols, gave ample opportunities for deliberations. Participants had a breakout session where they brainstormed in small groups, reflected and suggested approaches and solutions towards implementation aimed at addressing the constraints of access to agricultural land faced by smallholder farmers. And, importantly too, came up with ideas that would help in designing an engagement strategy to influence government and community leaders to enable increased access to land for agriculture.

The deliberations, reflections, suggestions and recommendations largely pivoted around a report PIND launched at the event on the factors affecting the productivity of farmers in the region.

Professor Biyi Daramola of the Federal University of Technology, Akure (FUTA) represented by Professor Adegboyega Oguntade — a lecturer in the same institution — who made the presentation of the findings and recommendations of the access to land report, emphasised that access to land is at the heart of the insecurity concerns not just in the region but across the country. Hence, the need to enhance access to land transcends the bounds of agriculture and food security to security of lives and property and the peaceful co-existence of the divergent groups in the country.

There are extant regulations that govern access and land availability in the country, but they are weak and really not enough. Hence, the need to strengthen them and bring in better-streamlined regulations. One of the new regulations that could chart a new course in the access to the arable land drive is land banking — the practice of aggregating parcels of land for future sale or development. However, the banking has to incorporate what professor Oguntade called “land titling and registration”.

“For land banking to work, one thing that the Presidential Technical Committee on Land Reform (PTCLR) has been talking about for years now must be undertaken; that is land titling and registration.”

The report which focused on Delta, Ondo and Edo states was conducted to find out the level of access to agricultural land and how such policies are being implemented.

“Starting with the national policies and efforts at alleviating the problems of access to agricultural land some past and present policies and programmes of the federal government were reviewed. To get a proper handle on these issues, it is important to adopt a value chain approach since it affords the opportunity to comprehensively study the factors influencing such issues,”  the report said.

The report further stated that “many of the states are not doing enough to assist real farmers in expanding their farming businesses. They are also helpless in assisting some vulnerable groups such as unemployed youths and women in their quest to access agricultural land for productive ventures. In many cases, they are left to sort themselves out.

“As for the big investors with sufficient resources, the story is different as they can access significant land with the assistance of the state governors. In general, the three states acknowledge the fact that access to land is a big problem and binding constraint in agricultural production.”

It also advised the government to build access roads to farmland; determine the fertility of the soil to provide farmers with appropriate recommendations on fertilizer application; provide improved agricultural inputs at subsidized rate; train farmers to acquire the required skills for agricultural production and make policies that are favourable to the farmers.

Security-wise, protecting farmers against herdsmen/cattle rearers who sometimes graze their livestock on farmers’ fields destroying crops and losses to farmers and providing a conducive atmosphere for farming were recommended by the report.

Going forward, it said the creation of agricultural land use database with georeferencing as well as validation of land by government (proper land banking system) and the strengthening farmers’ associations and reconnecting them to the appropriate agencies of government to create a synergy between their activities and; policies and interventions of government would help enhance access to arable land.

The report also recommended that communities should come out with guidelines on land acquisition which should be witnessed by all the approved structural representatives; encourage people to form cooperative societies and set up committees to deal with all land issues where offenders should be appropriately sanctioned.

For farmers, the report advised that they should form cooperative societies/farmers’ associations; make themselves readily available for training and make sure they adhere to government policy on land issues.