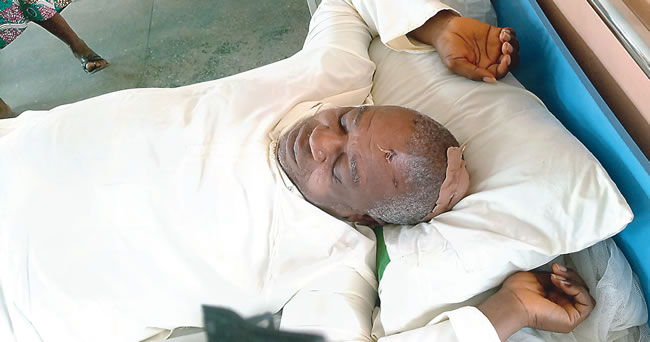 Chief Segun Oyewole, the Chairman, Pool Betting and Lottery Commission during the administration of late Governor Isiaka Ajimobi has been hospitalised following a recent attack by some Northerners in Ibadan. IFEDAYO OGUNYEMI reports;

Chief Segun Oyewole had just left Jericho area of Ibadan to go home on the night of Monday, March 15, 2021, when he ran into a crowd of people on Mile 1-10 some minutes past 8pm.

Sensing it was probably an accident coupled with the fact that he could not move forward amidst the crowd who had gathered, he applied brake as he approached the crowd of able-bodied men.

While waiting to get a grasp of what was going on at the scene, a blow landed on his face.

“God punish you, why you dey speed?” one of the men who had gathered at the scene said.

As he regained himself from the attack by men who he said were speaking in Hausa, Chief Oyewole sped off towards Ring Road but the men chased after him for about two kilometres on their motorcycles numbering about ten.

“They chased me but I didn’t allow them overtake me until I ran into a traffic gridlock at SUMAL roundabout,” he said while narrating his experience to Saturday Tribune at Adeoyo Hospital on Friday.

He continued: “I turned unto the service road in front of SUMAL. It was at this point that one of them went ahead to use his motorcycle to block the road ahead of me. And I couldn’t run over the motorcycle because it was laid down on its side. I stopped the vehicle.

“They climbed unto my vehicle and dragged me out onto the road and beat me. They continued beating me and pushed me into the gutter and I lost consciousness,” he said as he racked his brain for more details about the incident.

Few minutes after Chief Oyewole lost consciousness, men of the Nigeria Police attached to Oluyole Police Station, about three hundred metres from the scene were said to have met the attackers trying to set him ablaze.

Two of the attackers were arrested with a petrol-laden jerry-can they had retrieved from the victim’s white-colour Golden Dragon 18-seater bus. Others evaded arrest and fled the scene, disappearing into the darkness.

“I woke up at the hospital and it was then I learnt I had been taken to UCH before they brought me here to Adeoyo Hospital,” Chief Oyewole told Saturday Tribune. “It was the policemen that brought me here unconscious. The policemen said the attackers had a jerry can of petrol they had retrieved from my bus and they were about to set me ablaze when they got there.”

When asked if the attackers took away any of his belongings after the attack, Chief Oyewole said: “I think there was an accident at the spot when I approached them. But they are now claiming that I ran over their motorcycle and that was why they attacked me.

“Police arrested two of them that night. Those arrested are northerners. Their colleagues have been here about four times since I’ve been hospitalised here to plead on their behalf, saying those arrested are not the attackers. They also said they will produce the real culprits.”

The 68-yr-old who was with his wife, friend and another relative said he still was afraid even at the hospital because the attackers and their colleagues know where he is receiving treatment.

He told Saturday Tribune he hoped to be discharged in order to seek treatment elsewhere. “I don’t even feel safe here because they know I am here receiving treatment. Who knows if they will attack me here again? I am politically-affiliated and it could have happened to anyone. It happened to Falae and they wanted to kill him.

“I am presently feeling a lot of pains in my head, neck and lips. I had a stiff neck and bruises all over me and the medical personnel have asked me to do a scan of my head and my jaw to ascertain the level of damage done to me.”

At the time of Saturday Tribune’s visit, his head was wrapped in a large brown adhesive bandage. He also sustained wounds and bruises in his face and other parts of his body.

The nurses on duty declined to speak with Saturday Tribune on his medical conditions, saying the house officer in whose care Chief Oyewole was had clocked out.

I thought he was dead —Wife

A distraught wife of Chief Oyewole, Lola told Saturday Tribune she lost her balance upon learning that her husband was attacked.

“A police officer called me on mobile phone to tell me that my husband was attacked. I was devastated. I went to the toilet twice before I brought myself together. I didn’t know what to do or pick from the house.

“I called the policeman back to ask where they were. He said they were coming to pick me up at the house. So, I got in touch with a neighbour and told him about the attack and the policemen came and brought us to the hospital here.

“I was told they were initially at UCH but that they were on strike. They said they got my contact from one of the phones with him,” Mrs Oyewole said.

While thanking God for the quick intervention of the policemen who saved her husband from the attackers, she said: “I couldn’t recognize him when I saw him. I even thought he was dead. But I held on to my faith that he would survive. I pleaded with them to quickly treat him and promised to bring payment for the treatment.

“The police officers tried to get him quick treatment and I thank God for sparing his life. Some people who were in similar situations were not as lucky as he was. They are gone,” she said.

Femi Beckley, a childhood friend of the victim who was also at the hospital said: “I was informed on Tuesday morning and I went to the scene with a vulcaniser to inflate the tyres and took it to the station.

“The police said they had the tyres deflated so that the vehicle would  not be moved away. The attackers vandalised the vehicle. The side mirrors were destroyed and the steering is presently stiff.

“When I met him at the hospital, he was still not in very good condition.”

When Saturday Tribune visited Oluyole Police Station to get confirmation from the police, the vehicle was seen parked a few metres from the station but our reporter was prevented from ascertaining the damage done to the vehicle.

The reporter was directed to get approval from the state Police Public Relations Officer, DSP Olugbenga Fadeyi, before he would be given the details of the attack.

Repeated phone calls through his mobile line were not answered. A text, seeking details, sent to his phone number is yet to be responded to as of the time of filing this report.

Drug War: Marwa gets off to winning start