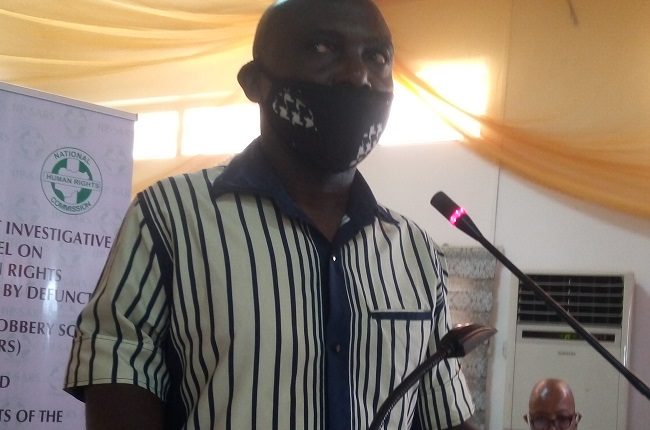 A witness on Wednesday narrated to the National Human Rights Commission (NHRC)’s independent investigative panel on the defunct Special Anti-Robbery Squad (SARS) and other police units how one Obinna Jonah died in police custody in January after being tortured for allegedly being a cultist.

The witness, Abbah Onoja, was testifying in the petition brought before the panel by the elder brother to the late Obinna, Okechukwu Jonah in which he alleged extrajudicial killing of the deceased.

The petitioner joined Inspector Musa Isah; the defunct SARS, Federal Capital Territory (FCT); Commissioner of Police, FCT and the Inspector-General of Police as respondents in the petition.

Onoja told the panel that he was arrested together with his friend, Chizoba Samuel at the friend’s house at Anguwar Shehu, Karimo, Abuja on January 27, 2020.

According to him, the police came to arrest Samuel but took both of them away, alleging that they belong to the Supreme Vikings Confraternity.

He told the panel that Obinna was also arrested the same day on the same allegation of being a cultist.

“They took us to their cell at the Anti-One Chance unit at Jabi headed by DSP Jumbo Jumbo. They are currently at Abattoir.

“When Obinna was brought, he was tortured and he admitted to being a member too. They asked for his firearms but he denied having any.

“After much torture, it got to a point that he couldn’t talk anymore but was foaming in the mouth,” Onoja told the panel.

The alleged cultists, according to the witness, were later taken to the Police Command, informing that as of that time Obinna could no longer walk and he was the one who supported the deceased.

“When we got there, Obinna could not walk again; I was the one who held him. The AO asked questions but Obinna could not talk. The AO was hiring him with a baton and said Obinna was not ready to talk.

“He then said that we should be taken to SARS detention centre at Abattoir for further investigation.

“When we got there, one Corporal Abubakar asked Jumbo Jumbo in pidgin (English) what should be done with Obinna. Jumbo told him that he (Obinna) should be dropped.

“He was kept in a cell but by the next morning, he was dead. The inmates were asked to bring his corpse out. That was on January 28,” the witness informed.

He told the panel that when the late Obinna was arrested by the police, he was “completely healthy”.

Apart from DSP Jumbo, Onoja mentioned Sergeant Gambo, who he informed was the main investigating police officer (IPO); one Biggie, who he claimed was a sergeant, as the officers involved in their case.

Earlier, another witness, Joseph Akinola, had informed the panel that Obinna was arrested by the police in his presence at the workshop they worked together as auto mechanics behind Next Cash and Carry at Jahi, Abuja.

According to Akinola, the policemen came very early in the morning of the day of his arrest, claiming that they wanted to repair their vehicle, which they said Obinna had been handling for them.

He added that when the deceased later came, he was arrested by the policemen and handcuffed before being taken to his house for a search.

“I followed them to the house where they went to search. It was there one of them gave me their telephone number to call them after Obinna asked me to collect his phone from a driver at Next Cash and Carry.

“One of them told me that I should not waste my time that Obinna is a waste product,” Akinola told the panel.

He stated that after collecting the phone, he called the policeman who gave him his number and was told to come and meet them at Jabi Mosalaci.

He informed that from Obinna’s phone, he coped and called his mother and sister to inform them of his arrest, adding that the mother gave the petitioner his (Akinola’s) phone number to call him.

Meanwhile, the panel has adjourned the matter to February 9, 2021, for the police defence team to cross-examine the petitioner and the two witnesses.

The chairman, Justice Suleiman Galadima (retd) directed the police to bring the officers Onoja mentioned in his evidence before the panel that day.

Katsina Schoolboys: Military is not part of negotiation with abductors ― DHQ