How peace initiative is bringing feuding Tiv, herders together in Nasarawa 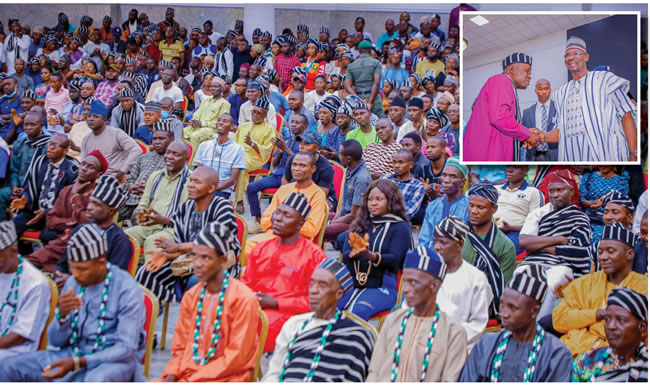 Tachia is a Tiv community in Keana Local Government Area (LGA) of Nasarawa State. When a team of journalists on tour of projects executed by the current administration in the state under the leadership of Governor Abdullahi Sule visited the community sometime in the evening of October, 2022, its leader, Zaki Solomon Akulo, was resting on a reclining chair on the verandah of his apartment.

Some members of the community had suspended their early evening activities as they trickled into Zaki Akulo’s compound to see what was going on. As one of the key Tiv leaders in the state, the visiting journalists sought his thoughts on the relationship between the Tiv and Fulani who have been in conflict for many years in Nasarawa and other neighbouring states.

Conflicts between the Tiv and herders over land and destruction of farm products by cattle have been the key triggers in the incessant violence between the two ethnic groups.However, the crisis was worse in Keana, Obi and Awe LGAs of Nasarawa State, where members of the two groups migrated in search of fertile land to farm and lush vegetation to graze.

Tension occasioned by competition for space thereafter boiled over, resulting in incessant clashes with deaths and destruction of property across the three LGAs for over many years.

The development threw up a number of Internally Displaced Persons (IDP) camps, especially on the Nasarawa/Benue border, and exodus of Tiv farmers and their families back to their roots in neighbouring Benue State.

However, the current administration, through various initiatives, has been able to foster some measure of peace and harmony across the fringes with feuding parties now cohabiting.

Although there were pockets of crisis in some parts recently, leaders across the divide said the anomaly cannot affect the progress so far recorded.

Zaki Akulo, who is also the Ter Utyondu of Nasarawa State, told the journalists that the various peace deals initiated and brokered by Governor Sule had been yielding results, with the hitherto feuding “enemies” living peacefully as neighbours and dining from the same bowls.

Zaki Akulo told the story of how he had to desert his community with his family and others under cover of darkness when the news of an impending attack by herders got to him sometime in 2014.He said they escaped by the whiskers as the marauders came at dawn in large numbers and razed the community to the ground.

Zaki Akulo further said that he and the other community members and their families became refugees in IDP camps as the gunmen roamed freely.He explained that peace returned to Tachia and other communities after series of consultations initiated by Governor Sule between the communities and opinion leaders across the affected LGAs.

He said, “Governor Sule visited IDP camps in the state and the neighbouring Benue State where many of our people were taking refuge to assess our condition and speak to us on the importance of living in harmony with our neighbours.

“He collaborated with the Government of Benue State and other neighbouring states on the need to secure their common borders to prevent foreign Fulani militias from invading them in cohort with the bad eggs within to cause further breach of peace.”

Few years down the line, Tachia has become a burgeoning community and boasts of a functional Primary Healthcare Centre (PHC).ZakiAkulo said he was able to moblise money from farm produce to roof his apartment which he had built due to the existing peace.Across the community, many new houses, which are symbols of prosperity occasioned by bumper harvests, are springing up.

ZakiAkulo explained that, “If you were opportune to come here five to six years ago you would have seen this entire community deserted and covered with bushes.

“We couldn’t go to the farms for fear of attacks by herders. There was hunger in the land and our women could hardly go to the markets in other areas for fear of being ambushed and killed.

“Today, you can see for yourselves that we no longer live in fear. Some of us just returned from our farms shortly before you arrived.

“And what’s more, we are living in harmony with our Fulani neighbours. In fact, my friend, Ardo Zakariyyau Usman, slept with me overnight before leaving for his home in Kadarko District this morning.”

He further said that what they discovered was that those causing the mayhem were outsiders who invaded the areas through the aid of unscrupulous elements in their midst.

He disclosed that, “The governor has paved the way for peace and we have been collaborating with other ethnic groups on the way forward.”

Like Tachia, Tiv settlements such as Agon, Kalachi and Imon in Keana, Obi and Awe LGAs are all basking in the wave of transformation fostered by the return of peace to their domains.

Many Tiv leaders across the state and beyond have variously attested that conflict between herders and Tiv farmers, as well as other ethnic groups, had ebbed following peace deals initiated by Governor Sule. They reechoed Zaki Akulo’s position on the peace efforts that have removed Nasarawa from the list of the “most crises-ridden states” in the North and the country at large.

Speaking on the peace currently being enjoyed in the state, the President of the Tiv Development Association (TIDA), Mr Peter Ahemba, said the state had never had it so good in terms of security.

He commended the governor for putting an end to the incessant unrest in the southern part of the state that led to the displacement and exodus of Tiv people from the state.

He said the attacks had led to loss of several lives and triggered humanitarian crises which put many in IDP camps.

He eulogised the governor for providing the enabling environment and supervising the return of IDPs to their homes.Also, at an event in the state in September, 2022, Senator Jacob Tilley-Gyado, a Tiv leader from Benue State, thanked Governor Sule for securing Tiv people in Nasarawa State from militias, adding that the governor had demonstrated that he was a leader for all.

He pointed out that the Tiv in Nasarawa were let down and betrayed in the past until Governor Sule gave them a sense of belonging. Tilley-Gyado said, “We find in you an ally and true leader who understands, identifies and protects us from attacks.”