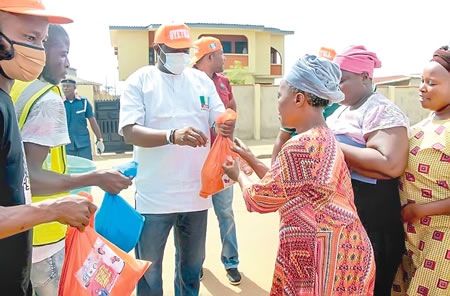 For many Nigerians, this period is a challenging one especially for people whose livelihood depends on daily income from hustles on the street. The lockdown and partial operation in some states have made many to lose their sources of income and surviving on a daily basis has become a herculean task. This is why many now depend on others and even some who take pride in being self sufficient have had to seek assistance from family and friends.

Indeed, at this period, the communal way of living has helped many as people that have to spare have in their little ways risen up to the challenge of being their brother’s keeper. And it is based on this that the Osun state Commissioner for Works and Transport, Mr Oluremi Omowaiye, went back to his roots to give back and ensure he contributes his quota to making life easier on the people.

His efforts which is mainly to improve the lot of people badly affected by the economic impacts of the Covid-19 pandemic by lightening the immediate burden of lack touched 10, 000 households as he distributed relief materials packaged by him with support from his friends from different walks of life.

His initiative which was described as a timely intervention was also an effort to ensure that people who had left their sources of livelihood to comply with the lockdown order of government as parts of effort to curb the spread of the coronavirus, need some form of assistance while they gradually get their footing back.

The project which he tagged the Ilerioluwa Covid-19 relief package was in two phases; the first stage which spanned two days touched 4000 households while the second phase touched 6000 households as he went around with his team to give packages which include food items and money to people in their homes.

The initiative which was primarily to give succour to numerous families and also aid the efforts of the state government in making it easier for people to survive before activities return to normal within the state traversed the length and breadth of communities in Ilesa. And to ensure that the principle of social distancing is strictly maintained, he did not select a location for people to gather for collection, rather, the commissioner’s palliative train which started from Ilesa West Local Government Area of Osun State moved from one family compound to another and covered the area street by street.

Omowaiye’s team did not leave out communities like Osu, Iwara, Ifewara and other communities in Atakumosa West Local Government Area of the state. And at every point, he also educated the people on the need to continue with personal hygiene and observing laid down guidelines in preventing the spread of the virus.

Omowaiye during the distribution told the people that government was conscious of the difficulties caused by the lockdown in the state and the challenge of meeting up after spending weeks away from their businesses and inability to attend to their various economic activities, but assured them that the siege would soon be over as Governor Gboyega Oyetola was doing everything humanly and medically possible to not only curtail the spread of Covid-19 but also ensure that things returned to normal as early as possible.

Omowaiye, who said the governor deserves commendation at this crucial time in the state’s socioeconomic life explained that he could not have pulled off the initiative successfully without assistance from friends. “I got support from some of my good friends for Ilerioluwa palliative for the people of Ilesa West and Atakumosa West local government areas of the state to reach out to people in the midst of the Covid-19 pandemic economic trouble. Initially, we had a target of 4000 households but it was simply overwhelming because everybody, even the rich, wanted palliatives. So we had to move to the second stage which covered 6000 households.

“This is indeed a trying time for us. We must all rally round every form of support for the government irrespective of our political affiliation. I appeal to our people to bear with us. It is no doubt a tough time for us but I must sincerely commend Governor Oyetola for his outstanding leadership so far. He has provided an exemplary leadership in this trying time,” Omowaiye said while calling on well-to-do people in the society to lend helping hands to the needy as part of their support to kick out Covid-19 from the land.