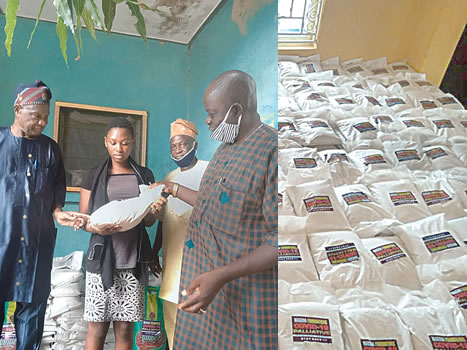 As a father who is concerned about the welfare of his people especially amidst the current hardship faced by his children in the face of the prevalent situation in the country, the Onpetu of Ijeru land, Oba Sunday Oladapo Oyediran, facilitated the distribution of palliatives to his people through one of his children, Dr Samson Adewale Adegoke on the platform of his Maigida Charity Foundation.

The foundation last week, over a period of two days, distributed over 7,000 pieces of five kilogramme bags of rice, semovita and garri to people within the Onpetu’s domain and surrounding communities.

Though Dr Adegoke popularly known as Maigida, has, in the past, touched lives by taking care of people, both the privileged and underprivileged within and outside Ogbomoso and by extension to the northern part of the country where he works, the recent distribution of palliatives was met with unprecedented joy by the people who said it was not only timely but also effective.

Speaking on the efforts of the foundation, Oba Oyediran, said Dr Adegoke is a philanthropist of high repute whose love for Ogbomoso cannot be quantified, adding that he called on him as one of his subjects to roll out massive food palliatives to the people of Ogbomoso with a view to cushion the economic effects of the coronavirus pandemic on them.

“Dr Adegoke is from Gbamolabebe Compound in Ijeru. It is just about twelve buildings from my palace. It behooves on me to call on him that our people in Ogbomoso are hungry, even though he had made countless contributions before and during the coronavirus pandemic. Though he is from Ijeru, his benevolence cuts across the city of Ogbomoso and beyond,” Oba Oyediran said.

The distribution simultaneously took place at the palace of the Onpetu and the office of the foundation at Oke-Ado Akintola, in the metropolis and had thousands of people as beneficiaries.

Oba Oyediran explained to Nigerian Tribune that with the support of the founder of the foundation and the team headed by Engineer Dayo Lawal, who is a former chairman of Ogbomoso North Local Government Area, he has successfully identified and given a larger chunk of the food palliatives to those in dire need of survival during this critical period.

According to him, “The less privileged were the targets; those we highlighted as beneficiaries includes the Leper Colony, The Nigerian Training Centre for the Blind (TNTCB), Keysey  Children’s Home – a home for the motherless children, Safe Baptist Children Home – another children’s home, all in Ogbomoso. Apart from these select homes of the people with special needs, the gesture was also extended to the poorest of the poor people in the community, the aged, and the downtrodden.”

One of the coordinators of the exercise, Mr Dokun Amos Oladele, told Nigerian Tribune that all together, over 7, 000 bags of rice, semovita and garri were distributed by the foundation, adding that, “we distributed 2000 bags of garri, 2500 bags of semovita, 2600 bags of rice. We have done so greatly to reach out to the poorest of the poor. We gave to people at Kersey Children’s Home at Baby Area of Ogbomoso; leper colony, Ogbomoso; Blind Centre; Safe Harbour Baptist Children Home, Ogbomoso. These categories of people really need this to cushion the economic effect of the pandemic. We also gave to the widows, the aged, crippled and visually impaired people who are not resident in the centre. We gave the food palliatives to thousands of them.”

On his part, the secretary of the Maigida Group in Ogbomoso who is a former principal of the Federal Government College, Ogbomoso, Mr Morakinyo Olusegun, added that the foundation also extended the gesture of love to those providing essential services such as the police, Nigeria Security and Civil Defence Corps, Federal Road Safety Corps, State Security Service and media establishments in the community among others.

“What we shared yesterday and today all over Ogbomoso is more than N10million. Dr Samson Adegoke Maigida is a philanthropist to the core. He always remembers the poor and those are his targets. He wants everybody to live happily. Even, apart from the love he has for the poor, he has also rendered countless assistance to individuals and organisations across the country,” he stated.

Speaking on behalf of the beneficiaries, Mr Simeon Ogundeji, a nurse who received the items on behalf of the Leper colony said, “I express gratitude to the donor of these gift items for the less privileged under our care. God will bring all his aspiration to fruition.  We equally extend this prayer to the planning committee and the originator of the programme, Oba Oyediran.”

A visually impaired student of Adeniran Memorial Grammar School, Ogbomoso, Miss Precious Esther Ajayi, on behalf of the TNTCB’s principal, thanked the donor for the gesture and his magnanimity.

“On behalf of the principal, the primary and secondary schools and the vocational unit, we thank our dad, Dr Adegoke Maigida, for the food items presented to us. It is our prayer that the Lord will bless and strengthen him,” she said.

Other representatives of beneficiaries include Mrs Esther Oyelade for Kersey Children’s Home and Reverend Timothy Ojo, director of Safe Harbour Baptist Children’s Home. They thanked Dr Samson Adegoke Maigida and Oba Oyediran for his gesture and continuous love to babies in their home.