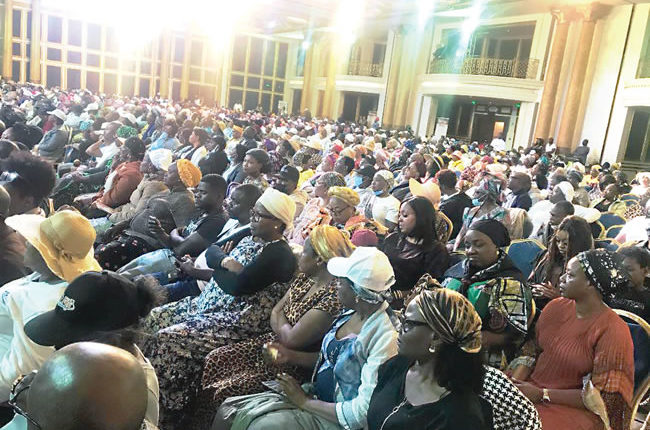 AS Christians were celebrating Easter festivities to mark the death and resurrection of Jesus Christ, over 1,500 worshippers from Nigeria and different parts of the world, including United States, Canada, United Kingdom, Dublin, Europe and Ghana converged on Jordan in the Middle East in the mood of worship and offer of supplications to God.

The spiritual tour, organized by Christ Apostolic Church, Covenant of Mercy, Ibadan, Oyo State and led by Prophet Taiwo Ojo, was packaged by Destination Management Company (DMC) in Nigeria, known as Absolute Success Travels & Tours, with Ufitfly as its brand.

The number of the pilgrims also came as first in the history of Nigeria and Africa.

With the tour, which combined hospitality with spirituality, the pilgrims were able to see some of things and places read in the Bible and experience a physical touch while touring the religious sites.

It was also a week-long 144-hour prayer time for the pilgrims, as Prophet Ojo led the prayers, with the support of other ministers of God including Pastor Adebowale, Pastor Akinade, Pastor Egbeleye and Pastor Adeleke, among others.

Receiving Prophet Ojo and others at Queen Alia International Airport, Jordan, was the Nigerian Ambassador to Jordan and Iraq, His Excellency Faruk Malami Yabo. In his remarks, the ambassador said he was happy to associate with Ufitfly and its unblemished records in taking Christian pilgrims from Nigeria on tour. He urged all to be good representatives of their country by observing absolute compliance with the rules and regulation of the Kingdom of Jordan.

The ambassador  added that while the pilgrimage was not a way to salvation,  it would enable the faithful to see the exact spots where life-changing events took place as recorded in the Bible and how it could go a long way to strengthen faith.

On the first day, he programme commenced with prayers by one of the ministers, Pastor John Adebowale, followed by praise and worship songs by a renowned gospel musician and saxophonist, Kehinde Ademeto Adebola, a.k.a Kenny Ologo Ara.

The pilgrims, who were excited in  singing and dancing, were full of expectations for divine touch from their maker. They also prayed with fervency morning, noon and evening, with the expectations of miracles.

The 144-hour prayers were observed at different the biblical sites visited pilgrims, among which were Gadara (the place where Jesus commanded the unclean spirit out of a mad man as read in Matthew 8: 28-34), The Citadel as read in 2 Samuel 11, the Dead Sea, Makawir Palace (where John the Baptist was beheaded).

Also among the sites visited was Mount Nebo where Moses died after God showed him the promise land but told him he would not get there.

Speaking with the Nigerian Tribune on the significance of Jordan to the Christian faithful, Prophet Ojo described it as a land of separation from the land of reproach to that of promise.

According to him, “when Israelites were in Egypt for 430 years, they were not called so. They were addressed as Hebrews because they had yet to get to their land. That is why anyone whose life has not accomplished glory will be looking for a place of covenant to destroy so as to fulfil his desire and excel.”

Citing Abraham as an example, Prophet Ojo said there is a covenant in every place touched by the pilgrims. He also stated that the Jordan river has its strength which is efficacious.

He encouraged the pilgrims to believe in God that He would cause a parting from the challenges they were going through, just as He parted River Jordan for Joshua and other Israelites.

“There is nothing impossible for God,” he asserted.

Saying that the journey by the pilgrims was spiritual, Prophet Ojo prayed that they would all be filled with testimonies..

In his remarks, the team leader of Ufitfly, Evangelist Ogunkeyede expressed appreciation to Prophet Ojo whom God used for the company to break a record of such number of pilgrims visiting Jordan at once for a spiritual exercise.  He prayed that the pilgrims would not return to their different homes empty handed.

“This pilgrimage is not about breaking record but about having testimonies, and your testimonies shall be divinely confirmed,” Ogunkeyede told the pilgrim faithful.

He also thanked the Chairman of Rabat Tours, Mr Tawak from Israel who had been in partnership with UFITFLY for about seven years, saying that he had had positive effect on his vision.

He gave commendation to all staff of Ufitfly who worked tirelessly to make the trip a success.

Saying that Ufitfly commenced about eight years ago as a brand and enity on  its own, Ogunkeyede made it known that tbe company, Absolute Success Global Travels, kicked off about 17 years ago.

He sourced for encouragement, advice and prayers, adding that Ufitfly had become a great pride in tourism.

Shadia Srour, the General Manager of Rabat Tours in Israel, which is the ground handler for Nigerian Christian Pilgrims Commission (NCPC) in the Middle East, described the pilgrimage/prayer programme as awesome.

“Today is a great day. We are in a new era in life after COVID-19 shut down the whole world for two years. And we are having a great experience handling this number of people who are Prophet Ojo’s followers. We have great honour to be handling them. It’s a great experience for all of us. All the pilgrims have prayed in the same place with Prophet Ojo morning, evening, all the time, taking advantage of  all the time available. It was really a spiritual experience,” Srour said.

Eulogising the Ufitfly team leader, Ogunkeyede, Srour described him as an amazing personality. She said: “I have known him for the last seven years and we have been climbing the stairs together. We assist each other and he has great vision. Without that vision, he would not have reached where he is now. To be able to handle over 1,000 pilgrims is not easy, believe me. You need infrastructure, platform, staff, financial capabilities and a lot more. It’s not easy but he manages things well.”

Also speaking on her experience with the pilgrims, one of the Jordanian tour guides, Rasha Marwan said that she was honoured having people from Nigeria coming to Jordan as pilgrims to see very important sites the country has.

She said that another thing she noticed of Nigerians when they visited the important Biblical sites was they felt so deep about it, and it was as if they were bringing the stories back to life. She said: “They have their own way to express their strong faith. It was a really unique experience and we are speechless about it. We hope to see more people from Nigeria. This is the first time for me to have this big number of people; more than 1,200. They all came together as one family. They have given us special experience about people from Nigeria. What I really admire about them is that they care about one another and also help, support and strengthen one another’s faith. And that is something we really appreciate. In fact, I will be super excited to have people like this coming from Nigeria.  I felt a connection between Nigerians and Jordanians and it is like we have known them a long time. That is something very nice.”

The Ambassador further certified Ufitfly as a trusted, dependable and reliable travel Management company with capacity and integrity.

One of the pilgrims, Mrs Tinuade Aliu, who felt elated being part of the spiritual exercise, said: “I saw the hand of God, and Holy Ghost power flowed over me. If you are spiritually inclined, you will experience God’s touch in all the places we went to. I experienced victory that has surpassed my knowledge and understanding.”