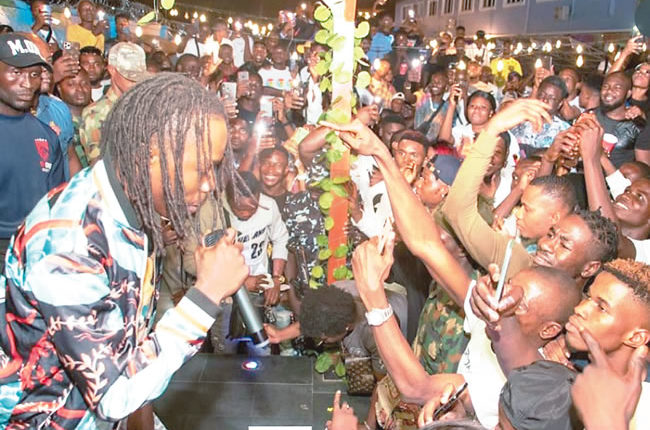 The city of Ibadan the Oyo State capital was rocked with excitement during the festive season as newly opened Cruzer Lounge and Bistro was a beehive of activities as revelers and party rockers were treated to an evening of musical performances that kept the city awake for 72  hours.

With the club already known for parading Nigerian music stars in less than two months of its commissioning with the owner of the business, Otunba Moses Adebayo promising to change the face of nightlife in the city.

The two-day event started on December 26 with rapper Naira Marley breezing into the venue at exactly 2am to give excited and waiting fans what he described as “end-of-the-year  performance” dishing out some of his hit songs that were equally chorused by his fans.

He thrilled the audience with his hit songs moving around the palatial poolside of the lounge  taking the ‘Marlian followers’ who thronged the venue to watch their favourite artiste take  them from one level of musical ecstasy to another.

There had been doubts about Marley’s coming to the club but his performance that night did  only put all doubts to bed but reassured his fans that Cruzer Lounge has become home for him  anytime he comes to town.

The venue was filled to the brim as security agents on the ground had a filled day controlling the ecstatic crowd and ensuring that the situation did not get out of hand.

From Marley to Bonsue Fuji star, Adewale Ayuba, it was a roller coaster of excitement as Ayuba lived up to his billing as one singer who is admired by many from different walks of life.

From every corner of the lounge, lovers of  Ayuba’s music surged forward to feel the pulse of his brand of  fuji as the singer and his band members entertained the crowd with a  blend of modern and old school tunes.

Ayuba traced the early days of his music to Ibadan where he performed at the then popular Odeon Cinema and other places, saying he would never forget how Ibadan people treated him with love and supported his music right from his humble beginning.

His performance continued into the early morning of the next day and his fans would not leave  the stage until the Bonsue Fuji king dropped the microphone.

He later declared that he would always make himself available on every December 27 to entertain people at the lounge.

How we are changing the face of Nigerian fashion, entertainment —Hotbillz