TUNBOSUN OGUNDARE writes on his encounter with a centenarian who shared her experience of the good and bad side of life. 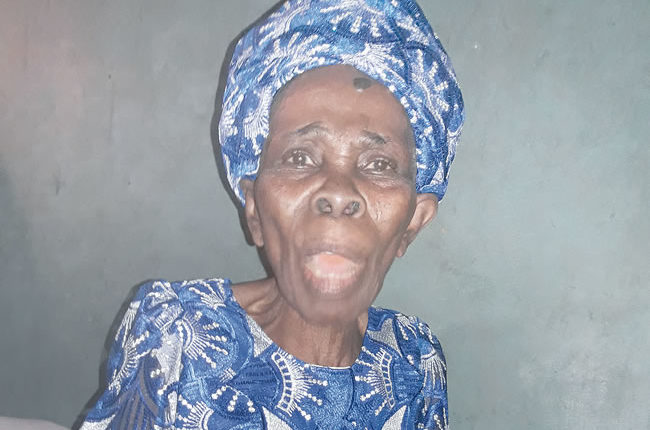 MADAM Alice Akinyele-Olumide is a rare bird, especially in an age when life is nasty, brutish and short. At age 101 which she clocked four months ago, she is still strong and active. It is sheer grace in a country where, according to the National Bureau of Statistics (NBS), life expectancy for women stands at 54 years and less for men.

Though a centenarian, Madam Akinyele-Olumide still cooks, bathes and moves around, including going to the market and church unaided. Surprisingly, she has lived most part of her life in Lagos, a city of hustle and bustle, where most residents sweat and struggle to eke out a living.

At Alakuko in Ifako- Ijaiye Local Government area of Lagos State, where she lives, the thought of coming to talk to a senile and incoherent senior citizen was quickly dispelled on coming in close contact with her.

“You are welcome my son,” Madam Akinyele-Olumide said, exchanging pleasantries with Sunday Tribune in Yoruba as she made to get up from the bed where she laid. «You too will live long,» she added, offering a prayer to the reporter.

Amazingly, longevity is a trait in Madam Akinyele-Olumide’s lineage, though she is the first in her family history to attain the centenary age bracket. Her father, for example, died at age 95 and mother at 99. Her husband (now late), died 16 years ago, at 89. She also has three siblings who are still alive; the youngest being 85, while the oldest is 96.

Her three other siblings, she pointed out, had died. The youngest died at 85 while another died at 96. According to her, the longevity trait is the grace of God, coupled with living a good lifestyle.

Growing up was very rough, she said, as her parents were poor and couldn’t afford to feed and clothe their children, much less send them to school.

“So, I was brought up by an uncle who was a farmer at Ilogbo-Ota, in Ogun State. While there, I used to follow him (of blessed memory) to farm to grow cash crops and also engage in frying of garri and making cassava meal (fufu) and processing palm oil, all year round.

“I engaged in all these and continued with the trade when I started to live independently up to when I got married and I then began to sell foodstuffs, kolanut and bitter kola,” she recalled, noting that she was popular at Ifo market in Ogun State including Mushin market, in Lagos and was one of the founders of Fufu and Leaf Sellers Associations in both markets.

The story of how the centenarian got married was interesting. She could, however, not remember the date except that it was close to Christmas and was least prepared for it.

On that fateful day she was on her way to visit her relation at Ilogbo-Ota who by then had relocated to Konifewo Village, another village in the area when she was suddenly waylaid by some men who abducted and took to her husband’s house.

Her husband was not a total stranger as of this time; in fact they were in courtship. She could only give two reasons for this strange act of abduction.

One was that she was at that time quarreling with her then husband-to-be for not buying her an “Aso ebi’ she badly needed for one family function. Again, another suitor was also showing interest in her.

“So, I didn’t know (initially) who my abductors were, neither their mission. They were many and the one who carried me on his shoulder was huge. I struggled with him alongside a younger sister of mine who was with me, to let me go. I also shouted for help, but the more I shouted, the faster their movement towards my husband’s village,” she explained.

But along the line, something more dramatic played out which was the involvement of her then husband-to-be in her abduction without her knowledge.

“While on the way, I sighted my husband-to-be coming towards our direction. He pretended as if he didn’t know anything because he removed his shirt pretending to join me to fight my abductors, without knowing he sent them.

“Those abductors even seized his wristwatch and threatened to beat him up with me not knowing that all were a game plan. Just as we got to the village, I was shocked. I saw a sea of heads, and immediately, they rolled out the drums and people began to dance and celebrate,” she narrated.

Despite all these, the then-new bride attempted to escape but she was under a close watch by some hefty men manning all the routes.

She spoke further: “Surprisingly, when the news of my abduction got to my parents and they confirmed the house they carried me to, they said, ‘Now, you are married.’

“I was shocked to hear that. And just as that happened, my in-laws sent emissaries to my parents to formalise and seal the relationship. That was how I got married.

“But honestly, I liked him as he was gentle and handsome. And I didn’t regret marrying him. He showered me with love. He was very caring and we hardly fought and even when we did like every other couple, we settled without a third party.

“Most times, we settled our differences at night. That is the best time to settle quarrels between couples who love each other,” she revealed.

Today, Madam Akinyele-Olumide owns a house in Lagos. She doesn’t eat salt or sweet foods and drinks, but takes lots of water, vegetables and catfish.  “I’m very mindful of what I eat and drink,” she stated.

Life to her has been bitter-sweet. In the course of her marriage she has lost several children including two sets of twins and three other children in infancy. Her fourth child, now 70 years old, is the oldest among her five surviving children. These experiences were very traumatic to her as a mother.

“And that is why I said earlier that I married a right man, otherwise the story would have been different because many husbands, especially nowadays, would hardly condone such a wife,” she said.

According to Madam Akinyele-Olumide, despite all these travails, even in the early days of her marriage, her husband who was an auxiliary nurse at the Military Hospital, Yaba, Lagos, before retiring to be a farmer, remained faithful to her.

When asked how sure she was about that, she said though, her husband was a ladies’ man, he didn’t see use that as a licence to frolic around.

“He had self-control when it comes to women. I can vouch for him on that. If he were not so, he would have married a second wife and even more, though I would have stood against that.

Relating the events surrounding her husband’s death she said she was in the market on that fateful day when she received a message that he was ill.

“I was told to return home so as to meet him alive. I was so afraid and disturbed by the news. Though, he lived for a few months longer, he didn’t fully recover from the illness,” she noted.

What did she miss about her husband? Sunday tribune asked. “Everything”, she said.

How Suspended EFCC Boss, Magu Avoided Re-Arrest
SUSPENDED former acting chairman of the Economic and Financial Crimes Commission (EFCC), Ibrahim Magu, avoided his re-arrest on Thursday for his decision to remain in the official residence of the EFCC chairman despite being suspended and another acting chairman named for the commission… Read Full Story
NASC Retires Clerk To National Assembly, Four Others
The fate of the embattled Clerk to the National Assembly, Mohammed Sani-Omolori, was sealed on Friday night following the gale of retirement announced by the National Assembly Service Commission… Read Full Story
Nigeria Records 600 New COVID-19 Cases As Total Hits 35,454
The Nigeria Centre for Disease Control (NCDC) has confirmed 600 new cases of COVID-19 in the country. The 600 new cases brought the nation’s confirmed COVID-19 infection cases to 35,454. The NCDCmade this known via its verified Twitter handle on Friday… Read Full Story
COVID 19: FG, WAEC Agree On Shift In WASSCE Date
THE Federal Government and West African Examination Council have agreed to shift the date of West African Senior School Certificate Examination from the August 4 to September 5, 2020, earlier announced by… Read Full Story

Foundation empowers over 200 youths on vocations