How Lalong won himself a beautiful wife, in-law 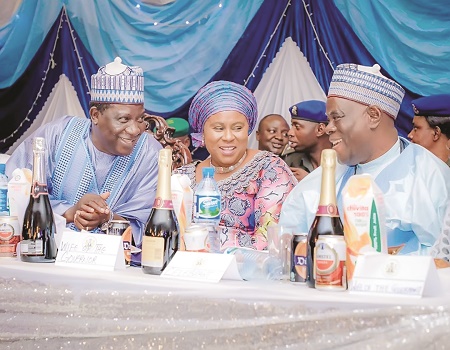 PEOPLE use different approaches while trying to win the hearts of women. While some have wonderful experiences, it ends up in ways least expected by others.

Plateau State governor, Simon Lalong used the occasion of the 70th birthday of the  Chancellor of the University of Ibadan, Nde Joshua Waklek, who is also his father-in-law to reveal how he won the hearts of his wife’s family members. The ceremony marking the birthday turned to be  a gathering of who is who in the state. The major speech of the occasion, made by Lalong, hillarious though, lit up  the  atmosphere.

From all indications, the governor was at the event to honour his father-in-law, and also to stand by his wife. When he was called upon to make a remark, Lalong delved into the history of how his relationship with the elder statesman, who encouraged him to go into politics, snowballed into marrying Regina Waklek, the daughter of his mentor.

Narrating how he met Nde Waklek, Governor Lalong recalled jocularly that as a  graduate, he along with some friends, were looking for accommodation and the only apartment they got was behind the house of Nde Waklek.

“We were bachelors living behind that house, but see where we are today. I must say that what endeared me so much to him were three things;“His sense of history (Political History); secondly, as a linguist, he speaks  many languages, including my language. He would tell me stories in my language.

“The last virtue that drew me to him is  politics. One day, I asked him why he had never contested any election despite the fact that he knows so much about politics. Each time he comes back from work, I would rush to the house to sit down because I knew I would always gain something.

“At a point, he said look, as a lawyer, I want to encourage you to go into politics. I said, but you discouraged civil servants from going to politics. He replied, “yes, I discourage them because some people rush and leave the civil service. They go into politics and when they don’t get what they are after, they come back useless.

“But as a professional, you can always go into politics and still return to your profession.’ That made me to.have a change of heart and started thinking of going to the House of Assembly in Plateau State.

“As regards his sense of history, some part of it I will tell you. The Ngas people will not want to hear that. So, in the course of relating historial events to me, he would tell me that you see why they are here around the Geomai land (Low land), it is because the Geomai people, when they came to war, they were afraid. So the Ngas people had to support them. And between Ngas and Geomai, the Ngas were the elderly brothers. I kept that to myself. I have told you that he speaks so many languages. In the course of getting close to him as a bachelor, I didn’t want to leave the place and that was what endeared me to the house and eventually, I picked one of his daughters as my wife.

“On his sense of history, up to till today, I have not seen any Ngas man to counter what I said. What he told me was a different thing, but my father, Long told me before he died, he said, is that what your in-law told you? I said yes. He said “but the history available to us showed that we all came from Kwararafa, fighting all wars with Ngas and all the Kwararafa sons, but when they got there, they were jittery. That was when the war was getting tough. Seing the situation, the Goemai people said if you are afraid, please don’t disturb us. Move to the hills and we will cover, and protect you. Let us finish the war and we will ask you to come back.  So, we finished the war and since then, they refused to come back. So my idea of going to pick a wife, and our ideas of going to pick wives from Ngas land, is to remind them that the war is over,” Lalong joked.

Continuing, he said, “You can all come back to the low land just like some other Ngas people that have gone there, and have refused to come back. I shared that with General Gowon last week. He said, ‘Geomai people, what do you understand? Only Moss (native liqour). You wake up in the morning and you just take Moss,” he said.

“He is a friend, Up till today, he still sees himself as a friend, and not as a father-in-law because in the course of our interaction, he does not want people to know that he is my father in-law.

“He prefers for people to say he is a friend of the governor. There was a time I was just attempting to rush to his house in the night and when I got to Tudun Wada, right before the house, about a 100 meters to the house, I saw a long queue of people. I said who are these people, what are these people doing there? Somebody told me that they are all in ‘your father in-law’s’ house. I just turned back. I said, do we have two governors?” he narrated with laughter.

“And so I asked him, how do you cope with them. He said well, ‘they see me as your father-in-law and that’s what I face everyday. I don’t sleep until 2 am.’ I said look, I sympathise with you. That is what you will continue to go through. Continue to go through all this until I leave office.

“So I thank you very much for that and may God continue to reward you, Lalong stated to express how popular and well-loved his father-in-law is by the people.

ALSO READ: The blessings of courage

“The last aspect of it was when we were elected, I was sitting one night and then, I had a call from Abuja and that call was for me to submit a name, a name of a retired Permanent Secretary. I said what for? They said it is special. President said you must submit one name and I said I have so many of them. What do I do. They said, okay submit three names. The ones you have confidence in. I submitted three name usual, I will submit one person from North, one person from central, one person from south. The next morning I read it in the news that Nde Waklek was the Chancellor of University of Ibadan. So I asked the Minister of Education, was that why you said it is special? He said yes because that is number one University in Nigeria and that university is strategic and so they wanted somebody with integrity. You know that I won’t judge, I won’t conclude now but he used one word. He said you must also know that it is one of the most troublesome universities. They will need somebody to be there and I said by God’s grace if it is this man, he will do his best in that university.

“So shortly after, he worked with the Sultan and the Vice Chancellor also came to me and said eh! Your Excellency, you made the best choice because since he came, as difficult as University of Ibadan is, we never had any strike during his period. So I was honoured. To further show how well he performed, his Eminence, the Sultan, said ‘I found a partner in Nde Waklek as the Pro Chancellor of University of Ibadan. We have worked together and I saw a perfect working relationship. He is a very very good man, very respected.’

“So with that kind of this thing about somebody, you will say you will always hold your head high and say Plateau has so many sons and daughters that can be posted everywhere and come back in high spirits.