How Lagos-Ibadan Expressway gridlock led to death of female banker, others —Community leader 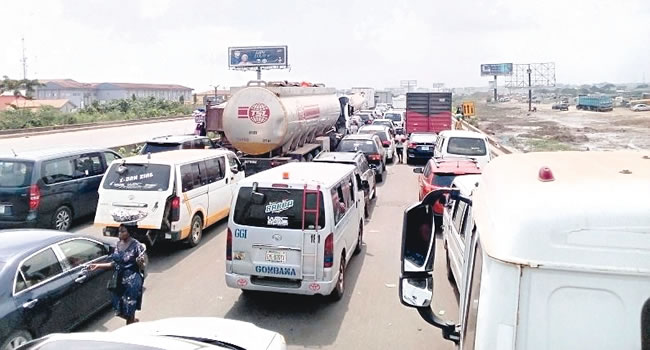 DAYO AYEYEMI writes on the unending gridlock on the Lagos-Ibadan Expressway even as the Federal Government unveils a relief package.

AS gridlock on the Lagos-Ibadan Expressway continues to defy palliative measures being thrown at it by concerned authorities, residents of Lagos State communities bordering Ogun State have claimed that the stress they encounter daily in the traffic is now causing untimely death among them.

The gridlock has persisted for weeks, leading to the Federal Government, under whose jurisdiction the road falls, to direct that the blockades that were introduced due to the ongoing construction work be removed to allow for free flow of traffic, during the yuletide.

The removal of the barriers is scheduled for December 15 and they will not return until January 2023. The exact date of their reintroduction is not set for now.

Speaking to Saturday Tribune on the destructive impacts of the traffic crisis on the health of residents of the axis, the chairman of Isheri River View Estate, Mr Yomi Akinde, said the traffic situation along the corridor is “killing.”

Akinde said: “Just today (Friday), the traffic from the Long Bridge has got to Ibafo. I also read from various WhatsApp platforms that many people have died of stress because of the traffic situation on the expressway.

“From one of the platforms, I read that a female banker who used to leave home at 4.00 a.m. for office in Lagos Island and return at 10.00 p.m. every day died of stress. This is one out of many cases.”

Saturday Tribune observed that the gridlock between the Long Bridge and Kara, inward Lagos of the expressway has been hectic in the last two months as motorists spend hours in the traffic congestion on a daily basis.

The current congestion is majorly due to the fact that the road has been narrowed to one lane from four lanes at FATGBEMS and Kara bus stops where construction is taking place.

Being a very busy stretch of road linking Lagos to other parts of the country, the traffic volume on the expressway is always heavy and a little obstruction on the route always results in gridlock.

As the traffic crisis worsens, residents of various communities along the expressway have found solace in commercial motorcycle operators who have moved to the borderline axis in their hundreds since the ban on their activities within the metropolis.

Apart from the riders brazenly riding against traffic and plying one-way lanes with reckless abandon in the full glare of policemen, as sighted by Saturday Tribune correspondent, their charge-per-trip has also gone up.

Saturday Tribune discovered that residents who patronise the okada riders as an alternative to spending hours in endless traffic now pay between N1,000 and N1,500 to journey from one point to another. These are trips that used to cost just N150 before the gridlock surfaced.

Meanwhile, the Federal Ministry of Work and Housing, through the minister, Mr Babatunde Fashola, has directed the contractor handling the section one of the expressway, Messrs Julius Berger Plc, to suspend work on the route from 15 December to January.

According to the Director, Federal Highways, Mr Esan Folorunsho, who represented the minister, during a tour of the Lagos-Badagry Road project in Lagos, the directive is meant to ease traffic congestion and allow free movement of Nigerians who would be traveling during the Christmas and New Year period.

The director said the contractor had been asked to remove all barriers between Kara and Long Bridge of the expressway to ease the traffic congestion.

He said construction work would resume in January and gave the assurance that the road project would be delivered by March.

Beyond the traffic challenge, residents of the boundary communities also claimed that influx of strangers into the area has aggravated insecurity which concerned authorities are allegedly not doing anything about.

In an earlier interview with Saturday Tribune, leaders of the communities disclosed that they resorted to pooling security fund of about N2 million every month to secure the communities.

Speaking with Saturday Tribune on Friday, the chairman of Isheri Community (ISECOM), Mr Abiola Abioye, said there had been no positive development despite various letters of complaint to the government.

“The entrance gate of our estate is filled with these guys. There is still fear of insecurity.

“The right of way from Kara to FATGBEMS Petrol Station on the Lagos-Ibadan Expressway, which is the frontage of our estate, is an eyesore. As all manner of people congregate there without any permit or approval,” Abioye noted.

On efforts made to get the concerned authorities to act, Abioye said: “What we have done as a community is that we have written the Ogun State governor, Prince Dapo Abiodun and the Ogun State Ministry of Environment. The Commissioner in the ministry, Mr Ola Oresanya, has promised to a meeting with us on the issue.

“We are made to know that the state governor has directed the ministry to find a lasting solution” Abioye added.

Mr Akinde, who leads Isheri River View Estate, spoke in the same vein, claiming that nothing concrete had been done to allay the fears of the residents.

He said the residents are “tired” of the situation. He disclosed that they had written a letter to the Ogun State Commissioner of Police, who he said directed the residents’ association to the Department of State Security (DSS).

According to him, the DSS did nothing on the security issues raised in the letter.

“The insecurity is still there. The entrance of the estate is an eyesore,” Akinde lamented.

Worried about my libido

‘My pastor-husband packed out of our home, moved in with lover who is his church member’