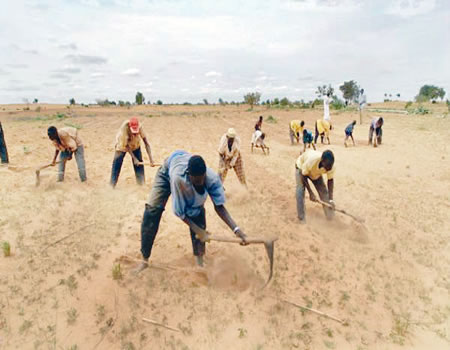 THE Agro-processing Productivity Enhancement and Livelihood Improvement Support Project (APPEALS) is a Nigerian government initiative which is implemented with the support of World Bank.

The project is expected to empower about 60,000 persons along 11 agricultural value chains in six states.

He said farmers were also being trained on capacity building aside supporting them to increase their productivity and processing.

He said the three main value chains in Kogi state are cassava, cashew and rice, which they have identified most of the farmers in the state.

Also, to enable farmers in Kogi State gain access to profitable markets to sell their farm produce and have improved incomes, the state coordination office of APPEALS project embarked upon the conduct of a feasibility study on market information for rice, cashew and cassava value chains across the 21 local government areas of the state.

The data got from the feasibility study will enable APPEALS project come up with strategies to bridge the gap in demand, organise the market situations, create a market information kiosk for farmers and enable them to gain access to improved technology.

“We need to let them know the new technologies that they should start making use of, not just about supporting them with inputs and other land preparation support, so what we just did was to include capacity building for them to make sure that what they do in the past that is not yielding result, they try something better for them to get a better yield, that’s what we do for cashew farmers.

Ozomata assured actors along the three value chains of APPEALS project readiness in providing quality market information and linking them to financial institutions and business services that would boost their productivity.

To this end, the Kogi State Coordination office of APPEALS project is conducting a reconnaissance survey on farm and processing clusters to obtain data on potential infrastructural needs for ease of prioritization and in alignment with the project development objectives of APPEALS project.

Ozomata told farmers and other stakeholders that the reconnaissance survey will enable the project to identify and prioritize infrastructural needs of farmers and processors in their cluster settings to strengthen their capacities and improve the physical environment.

He assured them that effort is being made to tackle the immediate needs of farmers in the state to enable them to meet up with this years’ farming season.

Furthermore, the Kogi State Coordination office of APPEALS project began the Mapping of Commodity Interest Groups (CIGs) along its priority value chains of Rice, Cashew and Cassava across the local governments in the state.

Dr Ozomata while supervising the exercise also sensitised farmers on the need to structure and organise themselves into groups with geniune farmlands in order to benefit from the project.

He also encouraged the farmers to approach farming as a business as this will lead to sustainability.

Also in the second phase, Dr Ozomata, said with support from the national office of APPEALS project, strategies have been developed and being implemented to speed up the empowerment process for genuine farmers in the state to meet up with this year’s cropping season. This is in a bid to help mitigate the food crisis that may arise after the COVID-19 pandemic.

As a step further toward facilitating the achievement of the Project Development Objectives of APPEALS, the kogi state project coordinator, Dr Ozomata inaugurated the Grievance Redress Committee (GRM).

Dr.Ozomata said the Grievance Redress Committee will serve as a platform where farmers, beneficiaries and communities benefiting from the APPEALS project can channel their complaints for quick and fair resolution.

He said being proactive with a focus on preventive measures will help ensure an effective GRM and urged the committee to ensure that issues are quickly and amicably resolved even before they escalate to a crisis level. He noted that GRM is an integral part of the project implementation process which will play a major role in facilitating the smooth implementation of the project.

Onoja said this when he joined the Project Implementation Staff during the Annual Work Plan and Budget implementation review meeting at Lokoja.

During the meeting, Chief Onoja underscored the importance of the review meeting to the effective implementation of the project in the state.

He urged that the 2020 Annual Work plan should conform with the provisions of the Project Appraisal document and the Project Implementation manual.

He reiterated the state governments support towards the Successful Implementation of the project in the state.

Also, the state commissioner of Agriculture Mr. David Apeh noted that the Ministry of Agriculture will provide the necessary support to ensure the effective implementation of APPEALS project in the state.

Chief Onoja also adviced beneficiaries of the APPEALS Women and Youth Empowerment Programme (WYEP) to take advantage the scheme provides in order to drive the economy of the state.

He stated this at the end of the pre-implementation meeting with WYEP beneficiaries on business and investment plan preparation at the Lokoja centre.