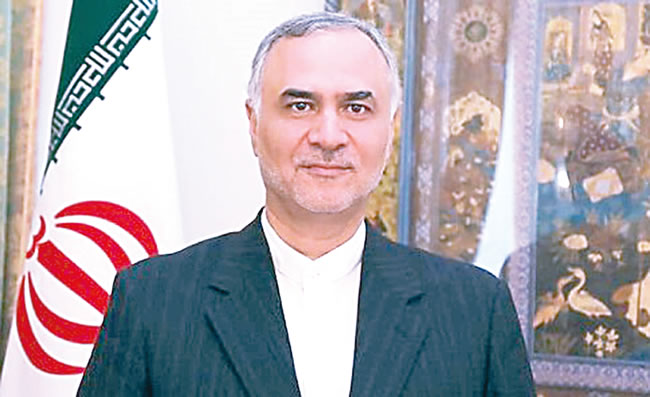 The Ambassador of the Islamic Republic of Iran in Nigeria, Muhammad Alibak, spoke with the Northern Bureau Chief, MUHAMMAD SABIU, on the insurgency in the country, the readiness of the Republic of Iran to assist Nigeria to end Boko Haram, as well as how peace could be achieved in the Middle East. Excerpts:

The Islamic Republic of Iran has gained valuable experience in this field due to its long-term fight against terrorism. From the beginning of the formation of Islamic State of Iraq and Syria (ISIS) in the region by the United States (U.S) terrorist government, Late General Qassem Soleimani, has been at the forefront of the fight against this group, and without any expectations, he shared his experiences in the fight against insecurity with the countries of the region.

The principled policy of the Islamic Republic of Iran is always to share such experiences with countries involved in insecurity. For this reason, we have had various meetings with Nigerian officials and have always expressed our readiness to cooperate on security issues. If Nigeria wants to cooperate with Iran, we can help the country end terrorism in the shortest possible time. We have got the experience and skills going on our antecedents of fighting terrorist groups.

As an Iranian and lover of freedom and peace across the world, how did you remember the first anniversary of late General Qassem Soleimani who was an icon and commander of peace and freedom, can you share with us what actually took him to Iraq?

Martyr Hajj Qassem Soleimani had officially travelled to Baghdad on the invitation of Iraqi officials. He was carrying a political message to bring peace to the region. The message was supposed to be delivered to Saudi officials through Iraq. In fact, in addition to mastering military affairs, Soleimani was diligent in the field of diplomacy and peacekeeping, and in reducing tensions and expanding friendships in the region.

Unfortunately, the US government violated the national sovereignty of Iraq by assassinating him in a foreign soil, a foreign official, within the sovereignty of Iraq, which was completely, an illegal act and complete violation of international laws and regulations. The assassination of the counter-terrorism expert, General Soleimani, was, no doubt, meant to weaken Iran’s determination to rid the region of the artificial crises imposed on it by the US and its allies. But, instead of this dastardly act to weaken the Islamic Republic of Iran, it strengthened its resolve in the fight against the proxy army.

Many people across the world that depend on the narratives of the western world see the late General as an enemy of humanity, particularly the US and its allies in the Middle East. Do you subscribe to that?

We cannot describe Hajj Qassem Soleimani in just one aspect. He was the commander of the Islamic Revolutionary Guard Corps’ (IRGC) Quds Force; he was a strategist in full sense of the word and had always served the nation with respect and dignity. His knowledge and proficiency of regional issues and the fight against terrorism upset the terrorist regimes of the U.S and Israel. Our region lost a great warrior for peace. From contributing to Bonn Conference, Afghanistan issue, to a relentless struggle to rid the region of ISIS. Soleimani played a unique role in the fight to stabilise the Middle East and beyond. His assassination has exposed the U.S hypocrisy and showed them in their true colours.

The late general was a brilliant strategist, a humble and brave commander, a gentle character and above all, a national hero and an anti-terrorism champion. His loss was a tragedy, but his legacy of resistance and objection to bullying will remain well alive.

West Asia, where  Soleimani came from, is, arguably, the most unstable region in the world today. What can you say are the reasons for this and what do you think needs to be done to bring peace to this region?

The Middle-East and Persian Gulf region has always been coveted by foreign powers throughout history due to its abundant natural resources and also its paramount religious status. After the victory of the Islamic Revolution of Iran, a dramatic change took place in the Middle-East that sent ripples through the world and jeopardised the interests of the arrogant powers, namely the US. The Islamic Republic of Iran had sought to support the oppressed nations throughout the world and especially the Palestinian people. The IRGC’s Quds Force, commanded by the Hajj Qassem Soleimani, sought to organise small resistance factions into cohesive and well-disciplined armies to thwart the vicious U.S-Zionist agenda. Supporting the Hamas movement in the Gaza Strip against the barbaric Zionist aggressions, supporting the Iraqi nations against the ISIS menace are only a small part of anti-imperialist activities of Soleimani. We believe that any security constructs in the region that are not based on a collective nature would be doomed to fail because security cannot be brought from outside the region. Therefore, the last solution to bring peace in the region would be withdrawal of the U.S terrorist troops from the region.

What actions do you think should be taken by the international community so that we do not see such terrorist acts by governments in the future?

By committing a craven act of terrorism against Soleimani, the U.S violated international law and the UN Charter in a blatant violation of Iraqi sovereignty. It’s a well-documented fact which has been admitted by U.S President, Donald Trump, that US has had a crucial role in the rise of terrorism in our region, from AQ to ISIS. Not surprising that the US assassination of Gen Soleimani was cheered by ISIS: brothers in arms. The assassination of Soleimani has proved the claim of counter-terrorism by some countries is the same as their claim of defending human rights.

Just as they remained silent in the face of the assassination of Soleimani, they also remained silent in abusing the rights of the Iranian people through U.S war and economic terrorism, and never fulfilled their commitments to alleviate the suffering of the Iranian people, even during the Coronavirus outbreak. Unfortunately, the United Nations did not fulfill its responsibilities in this regard either. The UN Secretary-General’s recent report does not comment on the condemnation of the killings, nor does it address the negative consequences of this terrorist action.

If all countries and the UN had done their duty, we would not have witnessed the brutal assassination of Iranian nuclear scientist, Dr Mohsen Fakhrizadeh, on the eve of the first anniversary of the martyrdom of Soleimani.