How I will resolve kingship crisis with my brothers —Obi Okonjo

Interview
By Alphonsus Agborh On Nov 2, 2019 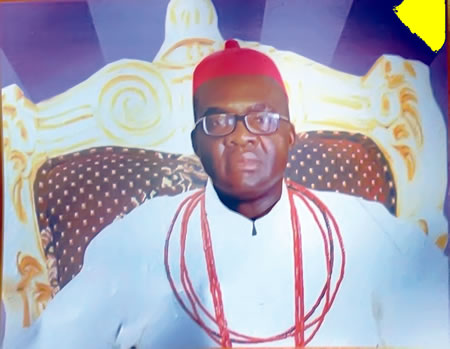 Amidst opposition from his kindred, including a blood brother, the Delta State government recently presented the staff of office to the traditional ruler of Ogwashi-Uku kingdom, HRM Obi Ifechukwude Chukwuka Okonjo II, after a successful coronation by the kingmakers of the community. In this interview, the monarch speaks on the journey to reconcile all aggrieved factions to enable him to regain the lost glory of the ancient town. Alphonsus Agborh brings excerpts:

How do you see the role traditional institution in Nigeria today?

So it is very important that it still remains relevant in the life of every citizen of Nigeria, it serves as a clearing house and for dispute resolution. It serves as a base for economic development, motivation, empowerment and also a base for social interaction with people and diverse groups so it is the foundation on which Nigeria as a country is actually built.

The road to receiving your staff of office may not be easy after all; what role did the state government play in achieving this feat?

The bold step taken by the governor of Delta State, Senator (Dr.) Ifeanyi Okowa, in presenting me this staff of office after a careful investigative process lays to rest who rightfully should occupy the Obiship of our Kingdom. It is our firm belief that the action taken by the governor would help to promote harmony in our kingdom. It is worthy to note that I passed through all the different stages to receive this staff of office.

This included the endorsement and presentation by the Umu Obi Obahai Royal Family, the chalking and crowing by the Agidiahei and Ikelike Kingmakers, the review by the local government office, the unanimous endorsement by all the traditional rulers in Aniocha South Local Government, the approval by the local government Chairman, review and endorsement by the Directorate of Chieftaincy Affairs in the deputy governor’s office and finally the approval by the Governor of the state.

Your ascension is seen like coming to build a bridge of peace and reconciliation in this kingdom following some crisis that almost engulfed the stool for too long?

Yes, well as I said before during the presentation of staff of office, for far too long, we have warred against each other and we have spent our energies in tearing ourselves apart, rather than uniting under a common goal. It is my hope that during my reign that has started immediately, I will try and reconcile various factions and bring them together because we are generally one. We also know that most of the people who have disputes are our own brothers and sisters, so we can’t be too far apart in what we want for our children and also what we want for our community. I hope it is to serve as galvanizing force that will bring everybody together and unite them and work through our differences. You know dispute between children of the same parents, it is how you look at it genuinely and transparently that would show that there is a genuine effort to reconcile the parties and I think over time, if we put the amount of energy that we have put into tearing ourselves apart into trying to mend offences, I think we will be able to solve our problems. So the monarchy this time we would work very hard to reach out to all people who feel aggrieved in one way or the other, rightly or wrongly.

I will work with them. I want everybody to know that I have a listening ear, that they are welcome. This kingdom is for all of us; it is not for only a particular group.

So, what’s your agenda to regain the lost glory of this kingdom?

We have set out a very elaborate agenda which has short term goals, medium-term goals and long term goals. The short term being within the next 36 months, medium-term will go about 10years then long term above 10 years. We have set out a clear agenda which would be shared among the people of the kingdom and we also intend to incorporate them by bringing them into being a sort of critic. They would examine some of the things we have put together which include socio-economic development in different ways. For instance, we want to tackle things like agriculture which has elementary capacity to keep people busy. We want to focus on bringing cottage industries into the Ogwashi-Uku area. We have plans to expand our rural markets. We have also plans of collaborating with different agencies both in Nigeria and out of Nigeria to improve things like the animal stock that we have. I don’t see why we don’t have ranches here and improve the stock of animals i.e. goats, pigs, cattle. So agriculture will play a major role. Cottage industry, we will try and set up one here.

We want to build a cultural centre also. This cannot be achieved without the cooperation  of the people, so we are going to take it to the people first, get their approval and say to them, this is what we want to achieve, come and join us to build a better and stronger Ogwashi-Uku.

There is this people’s opinion that your sister, the former Minister of Finance, Dr Ngozi Okonjo Iweala, did not do much for this community to fast track development here. What will be the magic for you now that you are here as the custodian of the people’s culture to cause the wind of change in the land?

Secondly my sister was in a very precarious position in the sense that all eyes were on her. She was serving Nigeria and not Ogwashi-Uku and had a responsibility to Nigeria. So for those people who say she did not do much in Ogwashi-Uku, she did the best she could. It was under her administration that we saw the dam come here, we also know there was growing effort that was put in place for the completion of that dam but in terms of taking money from different sources for putting roads and all of that, she probably did not do that because she was not in the implementation arm.

And you ask what I would do differently? I’m the man here, my focus is on Ogwashi-Uku as a community on how to change the dynamics of things in the community. My training as a finance consultant over the years gives me a lot of insight as to what we can do, how we can leverage the resources that we have here and to make the community grow. So we can attract investors into this place, into agriculture for example we can bring in people who know how to access finance for different sectors. Ogwashi-Uku  for example can have an industrial park that would attract people here.

We will know how to organise at the grassroots in terms of building co-operatives and it’s not the amount of money that you put in but how you utilise the funds and how you organise yourselves, that makes it easier  for growth and development to actually occur. So it is my hope that with my position here, I will act as a sort of a clearing house, a galvanising force that will bring all the loose ends together and also attract people to show that what is possible in this community by acting on various steps that will deal with fundamental problems that we find in here. So the difference that I see between myself and my sister: one is acting on the national level, another is acting locally, so there are two different platforms here.

In this present generation can the kingdom still stick to the old ordinances of doing things? Are we likely to see a change in modus operandi in the area of traditional belief?

Absolutely, we live in a dynamic world, one of the things that one has to accept is that change must occur, change for the better and not for the worst. So we are going to incorporate certain practices that we believe would further add development and do away with those things that we feel are just mundane and will have no impact on the lives of people.

For example, I don’t see why they say like a son of the Obi should not be able to see him at will, it is something that we must consider carefully or when they say an Obi does not see his mother, even though it is cultural, we should be able to change that around and say the Obi should see his mother. He should interact with his son, we don’t want things that are punitive in nature but progressive in nature and that is what I want to see happen.

I want to use this as a foundation for growth, change and for new ideas where the young people have their say on what happens, where information technology affects decisions that we take and because, whether we like it or not, we live in a global environment and so when you start introducing ancient practices that have little or no relevance in our society or in today’s world, it creates a problem for all.

In term of culture, let me point out that we are going to build a cultural centre. It is one of the first project that I tend to undertake where our songs, language, dance and various other traditional practices would be taught. It is also going to have a musical element where children will learn how to use various instruments both foreign instrument e.g piano, violin, xylophone and things like that with also our own local instruments like the ogene, drums ie talking drum. They will be taught there in the cultural centre. These can promote good aspects of our culture so that it will propagate early from when the children are small.

What is your message for your people?

I thank them greatly for their support and I want them to know that they have a listening monarch, a young and a vibrant monarch who is ready to work with everybody, irrespective of ideological differences, a monarch that is prepared to give his best to the community and that Ogwashi-Uku will be great again. That this community will occupy the position it once had many years ago. It will come back; we will regain our lost glory.