How I was shot by police, 75-year-old woman tells Ekiti panel 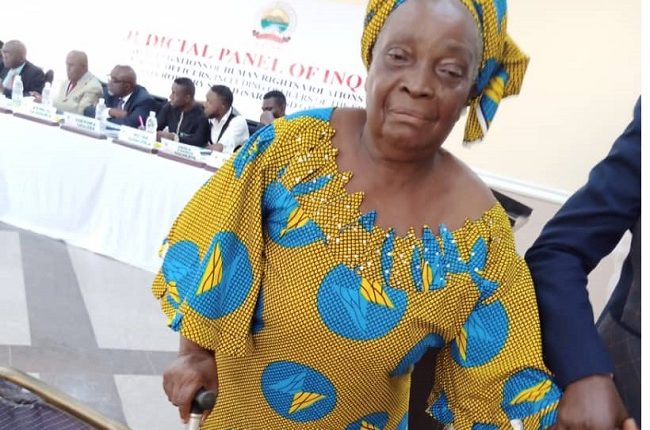 A 75-year-old woman, Mrs Janet Bejide has told the Ekiti State Judicial Panel of Inquiry into allegations of human rights violations by police officers how she was shot by men in the uniform in her shop in the state.

The woman who was defending her petition at the panel’s sitting said she was shot in her shop in Ire-Ekiti, Oye local government area of the state on August 10th 2020 by police officers who stormed the town.

She added that she was felled by the bullet and was only revived at the State Teaching Hospital in Ado-Ekiti, the state capital after several hours.

According to her, “I was selling cooked rice and the policemen came shooting, I bowed down and cover my head with clothes my hand now perforated with gun bullets in order to avoid the impact of the tear gas on me and I felt something hit my shoulder, my neck and my leg, that was all I knew and I was told later that from that point they rushed me to a private hospital and later to State Teaching Hospital, where I regained my consciousness.

I was later informed in the hospital that it was a gunshot that hit me, and I was told of a lady who came to my shop, sat beside me and wanted to buy rice for her small baby at that moment equally fell down and died instantly from the impact she received from the gunshot from those policemen.”

Bejide who could not walk freely due to the impact of the gunshots in her leg prayed for compensation of N20 million from the panel to have adequate treatment.

“Since that time I have been having a headache, I have not been finding it easy to live a comfortable life, now I have a problem with my two eyes and my neck. My legs are paining me, I need more and adequate treatment on my leg, hand and all the weaknesses in my body, Please help me, so that I will not die from this pain. I need good health, I want to return to my normal, life please help me,” the septuagenarian echoed repeatedly.

The police counsel, Samson Osobu told the petitioner that on the day of the incident, the town was celebrating the annual Ogun festival, ” where there used to be gunshots during the festival and influx of people into the town.”

However, Bejide refuted the claim and stated that the day was not for Ogun festival, adding, ” nobody used firearms for Ogun celebrations they use a cane.”

The Chairman of the panel, Justice Cornelius Akintayo (retd) adjourned hearing to December 10 for a continuation of hearing on other petitions.

The British Parliament at the Westminster Hall held a debate on ‘e-petition 554150, relating to Nigeria and the sanctions regime’ on Monday. The government of the United Kingdom has however responded…How I was shot

The surprise visit made on Friday night by the leaders of the ruling All Progressives Congress (APC) to former President Goodluck Jonathan at his residence in Abuja triggered a stir in the major political camps, resulting in at least four possible theories..How I was shot  How I was shot