How I was kidnapped, tortured by suspected herders, Labour leader narrates ordeals 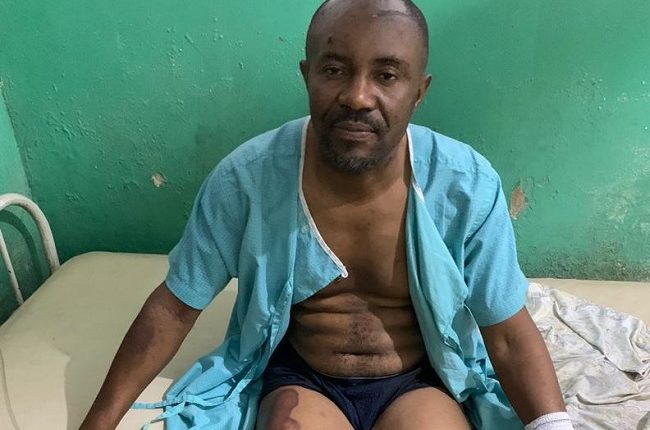 A Labour leader and district’s Chairman of the Maritime Workers Union, Nigerian Ports Authority, Warri, Delta State, Comrade Samson Pere, has narrated his ordeals in the hands of suspected herders who kidnapped and almost tortured him to death with five others persons along Warri-Sapele road.

Comrade Pere was among the six persons kidnapped around Ibada Elume bridge on the busy Warri-Sapele road on Friday, March 5, 2021, by eight suspected Fulani herdsmen.

The victims were held hostage for three days until ransoms were paid to secure their release.

Comrade Pere, who is currently recuperating at a private hospital in Warri, gives an account of his near-death experience with the deadly kidnappers.

He said he was on his way to Benin, Edo State capital from Warri when the kidnappers took over the road at exactly 4 pm, around the Ibada Elume bridge shooting sporadically.

According to him, “I was driving in a Hilux van to Benin, Edo State, on Friday, March 2021. they opened fire at my vehicle. I lost control of the steering and found myself in the bush. In seconds I was taken hostage by the kidnappers and five others from other vehicles by eight fully armed men with AK-47, machetes, jackknives, among others. We were two men and four ladies. They led us into the forest and kept us there. At 4 pm, they would feed us with fufu and soup without meat. 30 minutes after the meal, they would descend on us heavily. In the morning they would also beat us.

They beat us twice daily with hours of whip, cutlass, They inflicted machete injuries on us. They used a machete to cut my hand. It was an experience I will not wish anyone. They said it was the way they could only get ransom from us.

“They ordered us to get across to family members and any other person we could call for ransom. They demanded a very huge amount from me simply because I was driving a Hilux truck. When I told them that there is no way I can raise such an amount, they threatened to kill me and used the machete to cut my hands almost severing my hands.

“At the end of the day, my people were able to raise some millions of naira for them. They insisted I must pay such a huge amount because I was driving a Hilux vehicle. Five of us paid ransom. But one lady could not. They almost killed her. When we were being released, I pleaded with them to release the lady. After much pleading and beating, she was allowed to go with us. Besides the ransom paid, they took my wristwatch, a belt, a gold necklace.”

For those number of days, he added that they lived and slept in the forest, saying, “there were occasions, they took out two of the ladies, the younger ones away from us. They would ask us to close our eyes and they would take them deeper into the forest. I can’t say what they did to them.

“I suspect they are herdsmen because of the way they communicate and behave. They spoke the language herdsmen speak to cow to gather, discuss, and pass instructions. There are in their 20s. They boasted to us that they would continue to kidnap at that point, and truly after our release, I heard they kidnapped another 17 persons there last Thursday.”

On his final release and safety, Comrade Pere said: “I thank God for sparing my life, I also thank those who raised the money for my release. I will plead with the federal and the state government to do something about the insecurity on the road. With what I went through there I won’t have the courage to pass through that road again until security improves on it.”

“When they released us, as we were about to leave, I asked them if they would attack me again on the road because it is a road that I ply frequently, they just laughed. But on a serious note if the state and the federal governments do not do anything about security on the road I won’t take it again.”

The man, who went to the forest to pay his ransom, pleading anonymity said: “I didn’t start the negotiation, I was brought in when the captives told his wife to send my number. As negotiation continued, the ransom was suddenly increased by 100 per cent. Every attempt to negotiate reduction was met with a threat to kill our brother. Our brother was crying for serious help as he and other captives were being tortured with machete cuts. After three days the ransom was gathered and was taken to them for the release especially when all efforts reporting to the government security agencies yielded no attention.

“They asked me to bring the money along the Sapele/Warri road to stop at Ibada Elume junction where they would direct me. It was agreed that I should come with a bus and not more than three persons including the bus driver. On reaching Ibada Elume, they asked me to proceed as if I was going to Sapele on a snail speed as they were watching me coming.

“Suddenly, they asked me to stop and reverse a little to take a leg part road from the tarred road with the money. Not up to half a kilometre, someone whispered to me to change my direction into the forest. When I entered the forest, I met one young man who masked his face. He spoke to me in English with Fulani intonation to keep moving until I got to a point where they asked me to stop.”

“He counted the money with four men with AK-47 guns surrounding me. After they confirmed the money, they asked me to find my way to where I came from which I did. They told me that my brother would call me. The phone number with the number they used belong to another victim.”

The British Parliament at the Westminster Hall held a debate on ‘e-petition 554150, relating to Nigeria and the sanctions regime’ on Monday. The government of the United Kingdom has however responded…How I was kidnapped  How I was kidnapped

The surprise visit made on Friday night by the leaders of the ruling All Progressives Congress (APC) to former President Goodluck Jonathan at his residence in Abuja triggered a stir in the major political camps, resulting in at least four possible theories…How I was kidnapped  How I was kidnapped