Features
By YEJIDE GBENGA-OGUNDARE On Nov 30, 2021 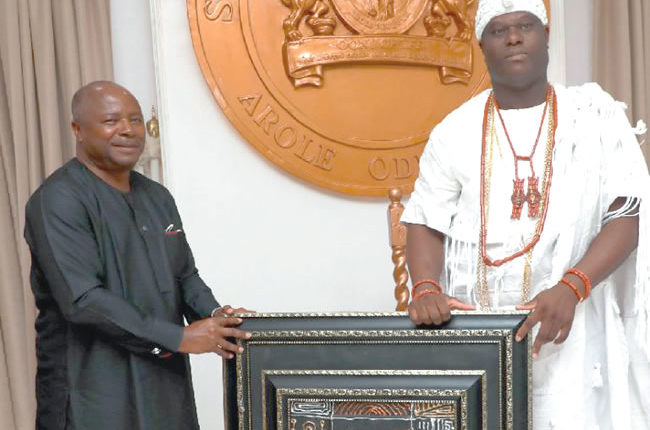 When Dr Nteranya Sanginga took over as the first African Director-General of an almost bankrupt International Institute of Tropical Agriculture (IITA) in 2011, the hope was dim among staff and stakeholders that he could do what a white administrator could not do especially considering the terrible fate that had befallen the research institute at that period. Ten years on, YEJIDE GBENGA-OGUNDARE reports that he not only made skeptics believers by turning the fortune of the institute around, his achievements also earned him recognition as he will in a few days be conferred the chieftaincy title of Aare Afurugbin Ola of the Source by the Ooni of Ife, Oba Enitan Ogunwusi.

In 2011, the fate of the International Institute of Tropical Agriculture (IITA) hanged in the balance and the future was bleak; staff morale was low and internationally and nationally recruited staff were leaving IITA in droves as benefits were taxed and sometimes cut while infrastructure were dilapidated, working tools almost nonexistent and career advances as well as promotions a pipe dream.

It was in the midst of this that the institute got its seventh Director General, Dr Nteranya Sanginga, on November 1, 2011, taking over from Dr P. Hartmann. And when he took over, faced with a surprising discovery of a failed investment of $15million, he sat tight and faced the challenge headlong, especially since few people believed that an African could make a difference.

Based on his belief that staff members should be prioritised and there is need for a mindset change, he organised a town hall meeting where he said “If you take care of IITA, IITA will take care of you” and he convinced the staff that IITA was more than a paymaster but a place where they can make impact. He carried them along; asked for opinions, suggestions and assigned tasks to those who did not expect it. And though it came with challenges and resistance, he persevered and this led to increased efficiency and focus among staff.

According to him, “I used the people strategy to inform the business strategy (IITA Refreshed Strategy 2012 – 2020) as the best approach to lead and develop the organisation. Both strategies have to work together to enable the organisation to deliver on its mission and mandate of transforming the agricultural agenda in Africa.

“Most staff in IITA and other organisations asked me about my people strategy. My answer has been that you will not find that in any annual report and probably not in any internal IITA document either. Yet, we all agree that people are the most important assets in any institution. For me, the people strategy is the link between business strategy and the implication for human resources.”

In the life of the 54-year-old institute, Dr Sanginga has proven wrong those who believed that with an African at the helms of affairs, the institute is on the sure path of destruction. He not only managed to destroy unfounded beliefs about Africans’ abilities, his exemplary leadership qualities also propelled IITA to enviable heights, making it the best agricultural institute around. Under his watch, IITA transformed into a strategic center, a go-to institution for innovation and knowledge on tropical agriculture and leading partner for research-for-development in sub Saharan Africa. 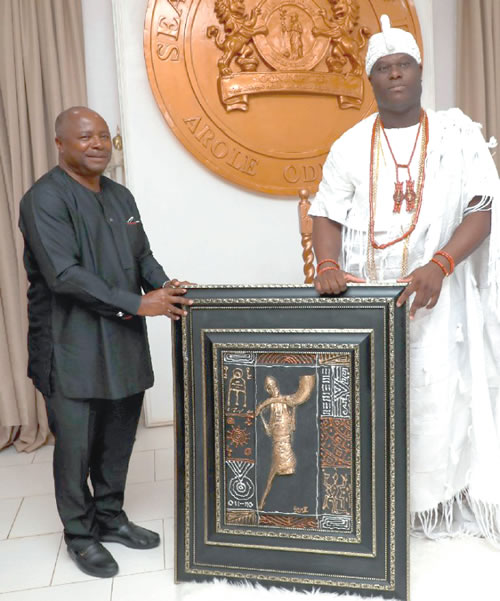 Having recognised the need to address the challenges of natural resource management, climate change, food and nutritional insecurity, youth unemployment and the need to transform African agriculture to feed its teeming population, he engaged the services of additional scientists, thereby, increasing the number of scientists in IITA from 115 to about 250. He also increased the institute’s workforce from 800 to 1500.

With his prudent and efficient leadership style, Dr Sanginga increased the budget of IITA from $35 million to $120 million. He further built up the cadre of scientists in the institution, partnered national programmes, expanded the research infrastructure with laboratories and field facilities now being used by about 200 research-for-development programmes and for capacity development of partners in the DR Congo, Mozambique, Nigeria, Tanzania and Zambia.

Under his leadership, IITA’s research efforts are now showing impact at both farm and community levels.  An impact assessment studies across several countries revealed that at least 4.3 million people had been lifted out of poverty in sub-Saharan Africa as of 2016 through the adoption of improved agricultural technologies developed by IITA.

He has been pushing for the engagement of youth and young students in agribusiness opportunities. He also started the IITA Youth Agripreneurs (IYA) scheme in 2012 to provide training and opportunities to youths from diverse disciplines in agricultural business and entrepreneurship. The IYA scheme has been helping to change mindsets about agriculture, build character, foster determination, promote self worth, hard work, self discipline and teamwork while it provides youths with start-up support, capacity building and opportunities that provide gainful employment in agricultural business chain.

In 2018, Sanginga launched an intervention programme, Start Them Early Programme (STEP), designed to take agribusiness studies to primary and secondary school students, engage them in club participation, course work and experimental learning with the aim of providing primary and secondary schools with agricultural inputs to train and empower students to change their mindset towards agriculture as a business and as an opportunity for job creation. STEP has been operating in DR Congo, Kenya, and Nigeria for over two years in nine secondary schools.

As the first African Director General of IITA, Sanginga had revived the institute’s partnership and capacity development program to work towards the common vision of agricultural development in Africa,  and also encouraged developments linked to the major African organisations-AfDB, African Union, Forum for Agricultural Research in Africa (FARA), among others, while maintaining IITA’s brand as a world-class research institute working in Africa for the millions of smallholder farmers and their families.

He believes that linkages with advanced research institutes are indispensable to ensure inclusion of state-of-the-art methods and approaches within IITA’s research activities and thus fostered innovative partnerships by ensuring that IITA plays catalytic and brokerage roles between advanced research institutions-both private and public, national agricultural research systems (including universities), and the private sector using different mechanisms for research dissemination.

Speaking on how he was able to transform IITA to a leading research institute and record several accomplishments in such a short time, Sanginga said it is about mindset, noting that everyone can make a difference with a set vision, passion and by working hard.

“It all boils down to leadership. We made a difference with a set vision, passion and working hard with the vision we have. As a leader, you put the people first. If you don’t care about the people and you don’t make the people the priority, you can’t make a difference. I was able to demystify the position of Director General. Changing the mindset is important and humility is also important in leadership,” he said.

And for IITA, a decade of Dr Sanginga’s leadership has opened up a vista of agricultural innovation that has turned the fortune of individuals and nations as he nurtures a good people system that balances science and administration. His giant strides in IITA remains unrivaled and has earned him a year extension in office from the  institution’s Board of Trustees after completing his five-year second term as Director General.

On December 11, Sanginga’s prowess at IITA will come to the fore again as he officially gets conferred with the title Aare Afurugbinola of the Source by the Ooni of Ife, Oba Enitan Adeyeye Ogunwusi, breaking record as the first foreigner and African to be conferred a chieftaincy title by Oba Ogunwusi since he ascended the throne of his forefathers six years ago.

Does the govt know that we know?

NCS honours Zinox Group with ICT company of the year