How I manage advances from male admirers —Actress, Laide Bakare 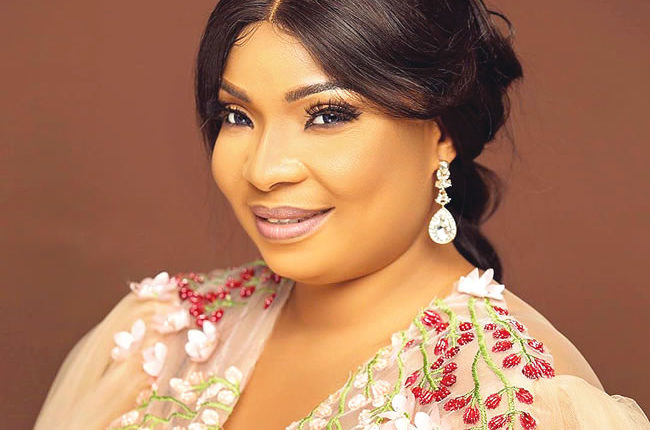 Laide Bakare has been in the Nigerian movie industry for a long time now and having produced and featured in several Nollywood movies over the years, the beautiful mother of three has decided to go into movie directing. The graduate of Theatre Arts, who also studied filmmaking at the New York Film Academy, in this interview by FEMI OGUNTAYO, talks about her career experiences, her upcoming projects, how she manages advances from male admirers and many more. Excerpts:

For you, it’s been a long time coming in the industry; would you recap how it all started?

While growing up, in my father’s hotel, in one of our buildings, some movie-makers came for a particular movie production and they needed a whole lot of things, including facilities around the hotel, which I got for them. It was from there I was inspired to start acting, which was how it started for me. Today, everything’s history. Now, I am an actress, a director and a movie producer.

What is new with the brand ‘Laide Bakare’?

A whole lot! I have a lot of projects I am working on presently. Just as we all know, the change has come; we really have to begin to think towards new ways of doing stuff, practically, new concepts and contents to work on, which is what I am doing now. Very soon, people will know exactly what the brand ‘new Laide Bakare’ has in stock.

What motivated your recent movie produced and directed by you, ‘My friend’s husband’?

The movie was inspired by a true life story and it is about two friends who were living in the United States. One is promiscuous and the other is so calm and responsible. So, unfortunately, the promiscuous one was deported to Nigeria and needed to find her footing. So she lured her friend’s husband into a relationship which almost ruined the life of her friend. Being a true life story, I felt it is very important for me to spotlight on such attitude, most especially for our people in the Diaspora, so they can learn and be careful with the kind of people they deal with, the friends they have around them, the kind of man or woman they have relationships with and the kind of people they send money to back home in Nigeria to develop properties and businesses for them.

It is a very interesting story, I am really happy with what we have done with it and it is coming out really soon. People out there should expect an entertaining and educative movie. There are a lot of lessons to be learnt from the movie and I am sure they will never be disappointed. The title speaks for itself and that is why it sounds so straight and direct, they already know what to expect from the movie. I promise they are going to love it, they are going to enjoy it, and I will say that they are a lot more coming their way.

How does it feel directing the movie?

It was quite fulfilling. I am a trained director, I studied theatre arts and I studied filmmaking from the New York film academy and I have been directing before I traveled to the United States to have my kids. Upon my arrival, I was actually concentrating on acting, and this time around I feel I have done enough acting, let me focus more on directing. Most especially, I wrote a story and I know the concept behind it and if I give it to another director, I wouldn’t want to be part of the directorial approach. So, I had to take full responsibility for directing it myself, since I know the direction I am taking it.

How has COVID-19 affected you and how have you been managing the effect of the pandemic?

It is something we never expected, but we thank God that everything that happened today is part of God’s plan. We can’t play God, the only thing we can do is to just learn from it. It is an eye opener that no condition is permanent and change is the only constant thing in life. It is also a way of reflecting about doing things differently. So that we can get different results. There is no one who is not learning from it, no matter the effect. So it is still okay in a way.

What positive effect would you say the pandemic has on you?

I would say this pandemic has really helped us grow in maturity, in thinking and making important decisions in life. It has happened and we just need to adjust to the new normal.

It is said that the Nigerian movie industry does not give room for up-and-coming actors or let me say, unknown faces, especially leading in movies. What is your say on this?

The movie industry is large and there are great opportunities in it. I believe there are a lot of up and coming actors and actresses that have been able to excel in this line of career. I really do not think producers do not patronise the upcoming, I think the upcoming actors are really working and are doing well.

Tell us about your love life, are you married? In a relationship or are you single?

How would you rate the Nigerian movie industry, in terms of development, do you think it is developing at the right tempo?

The Nigerian movie industry has developed and has grown from what it used to be. We are really developing, because even international platforms are now buying our contents, which is a very good development for us. In this industry, it is a job creation avenue which has helped a lot of people to make ends meet.

As a public figure and a beautiful actress at that, how do you manage pressures from male admirers?

I would say no pressure from male admirers at all because we cannot just be pressured into misinterpreting our fans for something else. I can tell you that most of these fans are genuine and not every one of them wants extra affairs. Well, in such a case, one is mature enough to know how to deal with that kind of advances. One, you don’t make yourself available, your private number should be private and you can’t talk to strangers randomly. So there are lots of ways to actually prevent oneself from being exposed to random male admirers.

What would you regard as your most embarrassing moment?

That would be moments when fans see me and they are like, oh you are actually short, and you are not tall. When we see you on screen, you seem like a very tall person, but you are not that tall. That always gets at me.

What do you think distinguishes you from fellow actresses in the industry. What stands you out?

Being myself at all times distinguishes me from others. I am so original. I am always myself. I don’t want to be someone else; I want to do my thing and I always want to prove a point and no matter what, I still do me.

Some words for your fans and lovers

I would like to appreciate my friends, fans and family for being so loyal, supportive, for loving me, for patronizing and buying my movies and for always asking after me whenever I am not in the country. I want to say, I love them all and I will never disappoint them.

Eating down in pregnancy does not prevent difficulty delivery —Experts