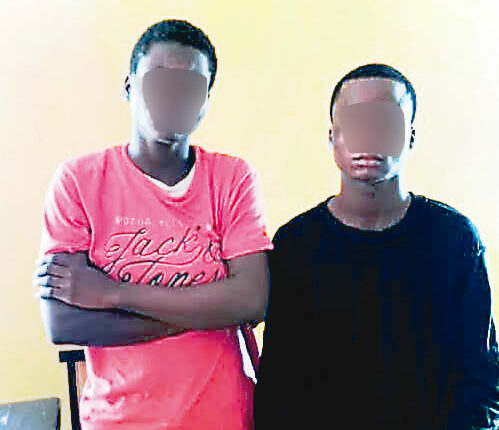 A 26-year-old mother of one, Okafor Chioma, has confessed to her joining a teenager to rob in a shop with a toy gun, saying that at that point, she was pushed into the crime by hunger.

Chioma was arrested with a 19-year-old boy, Nweke Joshua, by the Ogun State Police Command for committing robbery with a toy gun at Adesan area of Mowe Town.

The Police Public Relations Officer, SP Abimbola Oyeyemi, who spoke on the suspects’ arrest, said that they went to the shop of a foodstuff trader with the aim of dispossesing him of the day’s sales.

The PPRO said when the Divisional Police Officer of Mowe Division, SP Folake Afeniforo, got the information, she mobilised a patrol team and the So-Safe Corps men to the scene where the two suspects were arrested.

A search was said to have revealed the toy guns brought to the shop by the suspects, which SP Abimbola said looked like original pistols.

When interrogated, Joshua reportedly told the police that it was Chioma who came with the idea of carrying out the robbery operation in order for them to have some money.

He stated further that it was Chioma who bought the two toy guns and gave him one to use for the operation.

But in an interview with the Nigerian Tribune, Chioma said that it was Joshua who brought the idea and purchased the toy guns.

According to Joshua, an Ebonyi State indigene, “I came to join my elder brother in Mowe this year. I was selling boxer shorts.

“I got to know Chioma when she came to my brother’s place to stay. After she left, I went to her to ask for some cash. She replied that she did not have anything. However, she said she had an idea on what I could do to get money. She said that she would buy a toy gun which I would use to rob. I replied her that I had never done such a thing and would not want to get into trouble, but she said I should not be worried about that, asking me to follow her.

“I went with her to a shop where foodstuffs were being sold at about 8:30pm. Chioma asked for rice, and as the man bent to measure it, she made a sign to me to come in. I got in and she told the shop owner that what she needed was money, not rice. I brought out the toy gun and pointed it at his face. Immediately, he held on to the two of us and started shouting ‘Thief! Thief!!’ People rushed in and held me. That was what landed me in police station.”

He insisted that the toy gun was given to him by the female suspect after its purchase, disclosing however that he did not ask his brother for money when he had the need.

In an interview, Chioma contradicted all the first suspect said. Chioma, who is from Anambra State, said that she was initially living in Lagos State with her husband and 14-month-old son before moving to Mowe. She said that the change in residence was brought about when the Lagos rent was almost due and there was no money to renew it. She also said that her husband was relocating to Ghana to look for means of survival.

She spoke further that her husband gave her N75,000 to look for accommodation in Mowe, which would be less costly, and for feeding.

Her narration went thus: “I met Joshua’s brother, John, in Lagos where I was working as a shop assistant, earning N25,000 per month. He was living in Mowe but used to come to Lagos to make purchases.

“When the need arose for an accommodation, I called him to help, but he offered me a stay in his apartment while searching for the one that would suit me. That was how I met his younger brother, Joshua.

“Eventually, I got one and moved in. About a week after, Joshua called me and said he wanted to come to my place as he had issues with his brother. He said that his brother was treating him like a baby and that he needed money to go to the north to find a means of being on his own.

“When he came, he needed to eat but noticed that I didn’t cook anything. He asked me why and I told him that I had no money after paying the house rent, with the balance yet to be given to the landlord. My son had been going hungry and I had been buying things on credit until I didn’t have anywhere to go again.

“He gave me N2,000 and I went to buy foodstuff which I cooked for the three of us. I told him to leave some money for me as he was travelling the following day, and he answered by asking me if I would accept what he was going to tell me. I answered in the affirmative.

“He said he knew a young man with a foodstuff shop close to my residence but would be recognised if he should go there. He told me he also needed money. He said we should go to the trader in the evening and I should take whatever I would need. I told him that foodstuff was my paramount need.

“I asked how we were going to do it and he said we would go and buy a toy gun. We went together and got the toy gun. I was afraid of what we were to do, but he asked me to be calm, mocking me that it was the reason I was dying of hunger with my son.

“He said that I should be the first person to go in, since he was known, and tell the trader to bring the things I would need. He said he would come in and be talking to the boy while I would leave with the things given to me.

“While the boy was measuring rice for me, Joshua came in and tapped the trader on the back. The trader raised his head, saw Joshua with a toy gun and raised the alarm. He also held me. Joshua gave him a punch and ran away, but was later caught.

“I accepted to join him because of hunger. I was already owing two foodstuff sellers. I have never done such a thing in life. I was still owing the landlord N5,000. I called my husband, crying that I needed money to feed but he cut off the line. I had searched for a job, carrying my baby along, but I was not employed. My head was filled when Joshua came with the criminal suggestion. I had never stolen before then. I’m so ashamed of what I did.”

The female suspect disclosed that she was a law student at the University of Nigeria, Nsukka (UNN), Enugu State but dropped out in the third year in 2019 when she got pregnant.

“My husband told me to come and have the baby, promising my return to school after delivery, but I had a miscarriage. I got pregnant again and had the child in September 2021.

“I am from a broken home. My stepfather and my mother were sponsoring my education but the pregnancy destabilized me,” she added.

The state Commissioner of Police, Lanre Bankole, has directed that the suspects be transferred to the State Criminal Investigation Department for discreet investigation.