How GIZ–GIAE GAP training is revamping maize farming in Kaduna 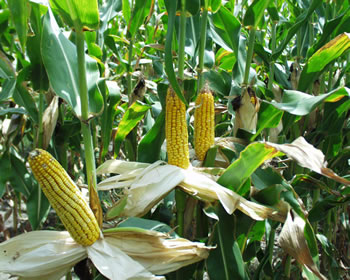 Nigeria is the largest maize producer in Africa. Annually, Nigeria produces about eight million tons of this food crop. Maize is grown all over the country and the leaders in this crop production include Niger, Taraba, Kaduna, Adamawa, and Plateau states. They have the biggest plantations of maize and in previous years they sold the crop with profit.

Maize farmers in Nigeria suffer low yield per hectare as a result of attacks from pests and diseases, and majorly by not adopting best practices in maize production which helps to increase yield.

This setback has lingered for years resulting in disappointments of farmers and discouragement from embarking in maize production, thereby leading to a shortage of maize across the country.

In recent time, the Green Innovation Centre for the Agriculture and Food sector (GIAE) has embarked on training in Kaduna on the Good Agricultural Practice (GAP) for maize farmers.

According to the GAP trainer, Zacharia Sabo, “Good agricultural practice is all about the timing of planting, knowing the variety of seed you are supposed to plant and timing fertilizer application so, we are really adopting that at a higher rate, most of their lives have been improved, especially the 14 groups I have trained.

“We do the training module by module, we have five modules to train the whole cooperative societies. The first module is the site selection, to know the unit of the farm, to tell them how to measure the farm, using either GPS, walks or tapes, we taught them different methods of farm measurement.”

This GAP training has assisted maize farmers in Kaduna to understand the best practices in maize production, which has helped to increase their yield, make money from sales of their produce.

Mrs. Veronica Turaki from Kakau, Chikun LGA, Kaduna State who participated in the GAP training said, “maize farming was never profitable until I started adopting the best practices I learned during the training, now I have doubled my yield per hectare.

“The training taught us how to choose the best soil for the crop, I know how to choose the farm suitable for maize, they taught me how to clear the land before I will make up my mind to farm. At first, I have to know how to arrange how I will cultivate maize, which starts from choosing the farm, clearing the land, then I must have had my seeds, that is certified seeds.

“Before now, I had little knowledge of how to measure my farm, but now, GAP training has taught me how to measure it without using any machine, I learned how to measure with my feet, I know when it’s one hectare if I walk and count it, then I know how many ridges I will have in that field, then after clearing, I will cultivate, all my inputs are ready, I make the ridges measuring them in centimeters.

“Then when I plant my maize, I know the spacing I observe to guarantee good yield, then I was taught how and when to spray chemical after planting on the farm. Then when the maize germinates, from eight to 10 days, I will do my first application of fertilizer, that is NPK 15/15 or 20/10/10, and I will know how many bags to apply per hectare. They taught us that we require six to eight bags per hectare, then after three weeks, we learned that we will apply the urea fertilizer, for one hectare, two to three bags are needed.

“They told us to always observe our farms, when I go to the farm, if I observe any disease, I will contact the agro dealers to get chemicals and eliminate the disease. Before we didn’t know all these things, right from childhood, farming has been my work.

“During harvest, I won’t leave the maize to dry in the farm, they taught me the appropriate time to harvest. In the past, after harvesting our crops, we wouldn’t know how to preserve them, but now, GAP has taught us how to use tarpaulin, but if there is no money to buy the tarpaulin, we use the cement sack, we make the tarpaulin with it, put the crops there, then dry under the sun.

“After drying, then during packaging which is more important to me because in the past, any chemical we got, we would just mix it with the grains then and when consumed it, would cause disease, but they introduced special bags to us, I use them to package the grains,” she said.

“What I can say is that I made money from the maize cultivation, because what I get per hectare is more than what I used to get in the past, as of last year I got up to 49 bags of maize per hectare, but before I adopted the GIZ model, I wasn’t getting up to 20 bags per hectares, sometimes I used to 15 bags per hectare.

“But I can’t consume those 49 bags, even if we are up to 10 in the house, we can’t still finish the 49 bags, so this year before we started farming, I know how many bags of maize I sold to raise money to buy all the inputs we need in the farm without stress, and we still have some bags left and we have money in the house.

“Adding value into maize cultivation is very nice because from there I can sell one bag of maize for N13, 000 and buy cowpea (beans) which I don’t cultivate, so as you can see, farming maize with the GIZ model, we are very happy and appreciate the people that brought it.

“It’s from the money I realized from selling my maize that is used to buy fertilizer, chemicals and other things I used in farming this year, then the rest of the money, I raised capital for my shop, I sell shea butter, wrapper, I process, shea nuts, so I raised my capital from selling some of my grains.

“I have my grandchildren staying with me, I pay their school fees, one of them is entering SS1, I sold half bag for N5,500, I have already given him money for registration, bought uniform and sandals and other things, I can’t go to borrow money from people,” Mrs Turaki said.

Meanwhile, the trainer, Mr. Sabo said “the farmers am training are catching up and they are appreciating it, even people from Israel, China come to our farms, they appreciate it because we are really adopting the good agricultural practice.

“The we taught them how to source their inputs, how to do the land preparation, how to apply fertilizer, when to harvest and the type of varieties they are going to use, we have many varieties, there are early mature variety, we taught them when to sell the yield after harvesting, we try to teach them how to sell the produce in cooperatives and sell off-takers.

“I have graduated about 14 cooperatives, and each cooperative has 30 members and right now am working with 8 cooperatives”.

In Talele, Chikun LGA, Mr Joseph Micheal is cultivating 18 hectares of Maize after acquiring knowledge at the GIZ GAP training.

According to him, he initially cultivated 5 hectares after which he was discouraged because of low yield, but after the GIZ training, he increased his cultivation to 18 hectares.

“We started this farming with 5 hectares, we gradually increased the hectarage, now the total area which we covered is 18 hectares. I was almost discouraged because of the way things was going, we had financial challenges, so when we found the GIZ training, I picked courage and encouraged my father on it, as I participated in the training, the courage was so much, that boosted my morale to increase my Maize farm to 18 hectares.

“When I was using the old ways of Maize farming, the yield per hectare was not much, I was getting 10 to 12 bags of maize per hectare, but with from am seeing now, am expecting at least 600 bags of grain from this farm, which will be roughly 35 bags per hectare.

“After harvesting the whole 18 hectares, am planning to increase the hectarage, this farm covers about 50 hectares, so I may cultivate the whole 50 hectares in the future.

“I learnt how to plant Maize appropriately, how to apply fertilizer, and so many other things. I will invest the money I realize from my Maize farm back into farming, I will put some birds in the farm so that I can be getting manure from the birds”, Mr Micheal said.

Another Maize farmer, Mrs Esther Daniel said she is planning to start supplying Maize to processing companies because her yield is expected to increase after attending the GIZ training and adopting the model in her farm.

“Am cultivating 2 hectares of Maize, last year we cultivated Maize but the yield was very poor compared to what we are expecting this year, we got less than a ton per hectare, but this year, as we have applied the technics, we are hoping that the yield is going to be more than that of last year.

This year I am expecting at least 50 bags of maize, after sales, I will want to increase the hectare of my farm which will make me a large scale farmer so that I can supply my harvest to processing companies.

“I want GIZ to extend their interventions to funds, if they have the wherewithal to help me on either loan or inputs, I want them to assist me so that I can boost my farming”.

Furthermore, Mr Sabo noted that “In Remyam farms, they were able to cultivate 18 hectares as a result of the GIZ motivation, initially, they were not interested in farming anymore because of their previous experience, I met the owner of the farm, I advised him to send some of his staff to participate in the GIZ training and he did so, that led them to cultivating 18 hectares of Maize, they used to cultivate 5 hectares, but they have improved.

“There is another farmer, we call him Nariya Global, we trained him on good agricultural practices, he expanded his farm to about 9 hectares.

“There is another farmer along Abuja Road in Dutse, Kaduna State, he is a large scale farmer though he has not been farming it the way it ought to be, so he was not making profit, he participated in the training and he is doing well now, he has improved.

“There is a Maize farmer, Danladi Sauri, he is a big farmer, he was not making much profit in the past, but now, after the GIZ training, he has expanded his farm. The challenge we encounter sometimes is bringing them under a cooperative, that’s basically the challenge we face, but in as much you attend for once and you are a farmer, you will continue coming because you understand the language and discussion “.

Importation of maize into Nigeria capable of destabilising the Naira —Adenola

How GM cowpea, rice can improve yield in sub-Saharan Africa