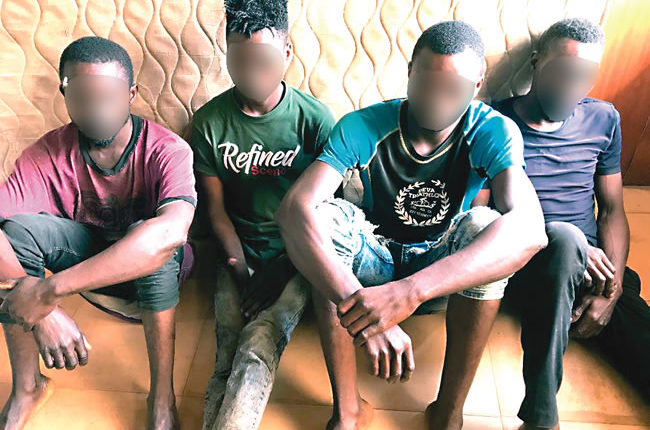 A Ghanaian, Monday Maleek, has confessed to conniving with gang members to rob nearby residents at Igbo Oloyin Community in Ibadan, Oyo State.

Maleek, aged 20, was among four suspects recently paraded by the state police command for armed robbery. Others were Austine Clement (19), Lanre Divian (39) and David Jeremiah (19).

The command’s spokesman, SP Adewale Osifeso, who briefed journalists on the suspects’ arrest, said that the gang members invaded the victim home at Igbo Oloyin, via Ojoo Area in Ibadan at about 10:30pm.

Armed with guns and some other dangerous weapons, the robbers reportedly attacked the residents and dispossessed them of a cell phone and some cash.

However, while fleeing from the scene, some members of a local vigilance group quickly alerted a team of police operatives attached to the Command’s monitoring unit who were on patrol in the area, leading to a hot chase and arrest of four members of the gang.

Recovered from them was a hoe which was part of the instrument used to attack the victim.

The PPRO added that investigation was in progress while efforts were ongoing to apprehend the fifth suspect who escaped.

Investigation by the police revealed that Maleek, who was employed to take care of a nearby farm where he lives, masterminded the robbery operation.

He was said to have hidden outside during the operation to avoid being recognised since he was well known in the invaded house.

Maleek quickly ran back to his dwelling place when they could no longer operate, but was picked from the ceiling where he went to hide after the community members apprehended Jeremiah and Lanre who led them to him.

They were said to have confessed their participation in the robbery but claimed that Abdullahi’s phone and his wife’s purse containing cash which they got had been taken away by the fifth suspect, identified as Jerry Joshua, who escaped.

The purse was said to contain the GTB Automated Teller Machine card of Mrs Janet Aminu, and N35,000 cash.

Narrating his experience, one of the victims, Mr Abdullahi a.k.a Baba Elemu, said: “My wife, son, two tenants and I were in our rooms at about 10:30pm when I suddenly heard a bang on the door.

“The invaders broke the door of my room and two of them entered while one stood at the door. What they first said was that ‘we are here to kill you.’ I started pleading with them, asking them what they wanted. However, they responded by beating me. In the process, I held one of them and threw him on the ground along the passage.

“At this point, my tenant and his wife ran out, and screamed to alert neighbours. When they saw that I was making much noise, they left me and escaped into the bush.

Nigerian Tribune had an interview with two of the suspects: Excerpts:

“I am from Ghana and I came to Nigeria almost three years ago. I am 20 years old. When I came to Nigeria I was climbing palm tree to  tap palm wine but I left the job and started working in a poultry farm owned by someone. I was living there before my arrest.

“My members and I went to a house nearby the poultry farm to rob, but I was not the one who suggested it.

“I didn’t know Lanre and Clement. It was the day we went for the operation that I knew them. I only knew Austin because he used to work with my boss.

The day we went to rob,  I was so drunk that I didn’t know what. I was doing.

“During the operation, I didn’t enter the house we targeted. I was by the road side I was the only one staying in the farm so we had the time to plan very well.

I ran back to the farm when I started hearing noise from the house we went to, but I was later caught in the compound. I never committed robbery before. I don’t know how it happened and how it got to my brain to rob.”

“I am from Benue State, Tiv by tribe. I have been in the state for almost two years to find a means of making money to continue my schooling. I stopped school at SSS 2.

“I was working on the farm where Maleek lives when I asked a friend, Lanre, to join me so that I could finish it and get paid.

“As Maleek’s boss was not around, we thought of finding other means of making money, so we decided to raid Baba Elemu’s house.

“I didn’t know that he was not rich because I was not close to him. It was Maleek who pointed him out.”

Nigeria yet to embrace the practice of physical planning —Ayinde

My quest for wealth landed me in another trouble after initial arrest, arraignment —Suspect caught with human skulls