(Text + Video) How Fulani workers connived with others to abduct, kill their employer in Ibadan 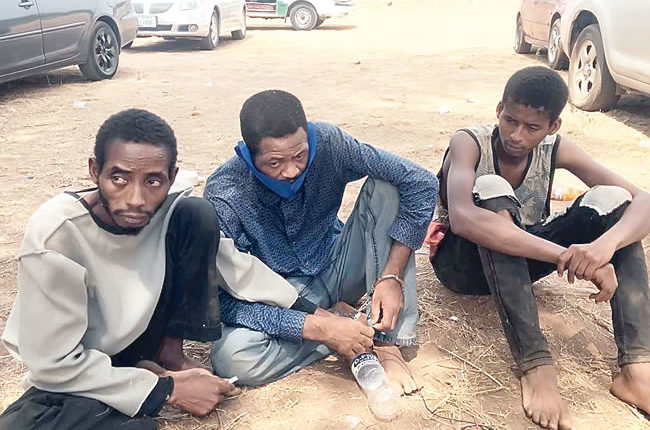 Timeline was December 28, 2020, at about 1.30 p.m. A farmer, Mr Oluwole Agboola, got news about one of his pigs on his farm at Adegbade community, via Aba Odo in Akinyele Local Government Area of Oyo State.

With the passion he had for his farm and love for the animals and birds he was rearing, Oluwole quickly made his way to his farm at about 1:30 p.m., to see the pig that was said to have given birth to 10 piglets.

He was on the farm and visiting his workers at different places they were attached to when suddenly gunmen armed with AK-47 rifles and dressed in military fatigue with their faces covered barged in, attacked the farmer and whisked him away to an unknown destination after firing shots.

Bewildered at the unexpected happening, Oluwole’s son quickly put a call through to the family to intimate them of the fate that had befallen his father.

The family, disturbed, waited with bated breath, was anxious to hear from the adductors, knowing that there would be a demand for ransom.

They were not disappointed. They received a call on December 29, 2020, from the victim’s phone. The kidnappers demanded N50 million as ransom.

The family and friends pleaded with the kidnappers from December 29 to 31 on the reduction of the ransom, until they were able to raise N1.650 million which was taken to the kidnappers.

Saturday Tribune learnt that when the ransom was paid on December 31, and there was no return of Oluwole, the family members, through the advice of someone, connected with the police on the case.

That was when work began after the then Commissioner of Police, Joe Nwachukwu Enwonwu directed the command’s Monitoring Team, led by CSP Sola Aremu, to begin work.

The operatives were said to have moved immediately to where the victim was kidnapped and commenced intelligence gathering.

Things began to unfold with the help of information and the team arrested a Fulani working on the farm, identified as Usman Dahiru.

In the course of interrogation, it was discovered that Dahiru was present on the farm on the day of the kidnap. On the day the ransom was paid, he also left the farm without informing anyone of his destination. But the  police got to know that he went to the kidnappers to get his share of the ransom.

One other worker, Ahmadu Muhammadu, also on the farm, eventually helped to trace Dahiru to his hideout at Bodija community in Ibadan, it was further learnt.

The monitoring team was also able to discover that one of Dahiru’s brothers, Hassan, who had once worked on the farm, and was frequently visiting the place after his exit from work, was one of the masterminds of the kidnap.

While working on tracing the whereabouts of the victim, the team had a breakthrough on January 3, this year, as Dahiru was trailed to Bodija area at railway track where he relocated to, and got him arrested.

After his arrest, Dahiru confessed that he knew about the kidnap and got a share of N50,000 from the ransom.

He also mentioned the other worker, Muhammadu, as being in the know of the kidnap plan.

With the help of intelligence, the police deduced that Oluwole must have been killed, if he was not released after payment of ransom.

After much interrogation, Dahiru opened up that the victim had been killed, though he claimed not to know the spot where he was kept. On January 9, however, the team got useful information with regards to where the body was. On January 10, the operatives went to comb the area, which was not far from where he was kidnapped. There the body was found, decomposed, but identified by family members.

Below is the narration of two of the suspects after their parade on Wednesday, February 10, by the state Commissioner of Police, Ngozi Onadeko.

How I got involved -Usman Dahiru

“I’m a Fulani man, but born in Ilorin, Kwara State. It is true that the day the kidnappers came to the farm, they met our boss, his son and those of us working there. They came with guns and took our boss away between 1pm and 2pm.

“I was not the one who directed the kidnappers to come to the farm. It was done by my brother, Hassan. He once worked with my boss, but was still coming regularly after he left. As he was coming, he was studying how things were going on.

“When he first informed me of his intention to arrange the kidnap of my boss, I told him not to try it, saying that he would get into trouble.

“When the kidnappers came, we were working. They beat and kept us in a place, while they whisked my boss away. They covered their faces.

I knew Abubakar, Aliu, Onto and Yellow among those who came to carry out the kidnapping.

I didn’t tell anyone because I was afraid. I followed my boss’s family to settlements around to look for him.

“Hassan later called me. Before then, when he came to us at the farm, I told him that I needed N50,000 as I was not financially buoyant.

I left Aba Odo for Bodija on Thursday, December 30.

“On Friday, December 31, Hassan came to where I was waiting for him and gave me N50,000. I asked him where he got the money from, and he replied that it was from the kidnapping of my boss that his gang carried out.

I quarreled with him over the issue but collected the money anyway. I also  asked him to give Muhammadu, who is an Alfa, some money also, and he said he would come to the farm to give him.

“I thought of returning home on January 4, unknown to me that police had gone to pick Muhammadu from the farm and were coming to me. That was how I was also arrested.

I swear, I didn’t know my boss had been killed.

I lived on the farm with my wife and children —Muhammadu

“On Thursday, December 31, 2020, Dahiru told me and the other worker that he wanted to go and buy something within Ibadan city. He did not mention a particular place specifically.

“We expected him for a long time, but he did not return. On Sunday, January 3, police came to me at the farm and asked of others. I told them we were only two around, with the other person working on the farm while I was trying something for us to eat.

“They asked about Dahiru and I told them he left three days before, saying that he wanted to go for a purchase within the city.

“I was never told of the kidnap plan. If I had been aware, I would have notified others.

I live on the farm with my wife and children, and my boss was paying me a salary of N15,000. He used to give me N1,000 from time to time outside the salary. He also used to give me food items.

“Again, he gave me part of his land for me to farm on it. Will I say that was not enough for me? What will I gain from his being killed? Why will I destroy him for me to succeed?

“Hassan never told me he wanted to kidnap our boss. He only used to come to take concoction (hantu) for protection.

I knew he was using motorcycle for commercial purpose, but became suspicious when he stopped the work.

“I couldn’t chase him away because his brother had been in the environment before I came.”

The third suspect, Mamuda, however denied being part of the kidnap gang, despite coming in contact with late Oluwole’s brother who identified him.

The police commissioner, Onadeko said that investigation was still ongoing, adding that efforts were being intensified to arrest the remaining suspects.

See the Video of the suspects here: