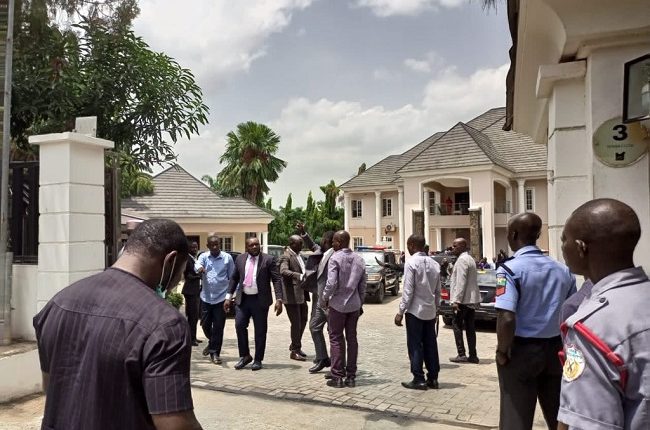 THE Economic and Financial Crimes Commission (EFCC) on Tuesday arrested a former governor of Imo State and presidential aspirant of the All Progressives Congress (APC), Senator Rochas Okorocha, after laying siege on his residence for many hours.

The EFCC operatives forcefully gained access into Okorocha’s No 3, Nyase Close, off Ontario Crescent, Maitama, Abuja residence, arrested him around 6.48 p.m. and whisked him away.

His arrest, despite his initial resistance to submit himself to the agents of the anti-graft agency without a warrant, came after there were gunshots by the policemen on the premises.

Security operatives had to fire shots and teargas to disperse the crowd, mostly supporters of the senator.

They also broke the doors leading to the house, before they were able to arrest the former governor.

In a press release signed by its spokesman, Wilson Uwujaren and made available to the Nigerian Tribune, the anti-graft agency confirmed the raid on Okorocha’s home, saying that the senator jumped the administrative bail the commission granted him.

The EFCC spokesman said, “Operatives of the Economic and Financial Crimes Commission, EFCC, today (yesterday) May 24, 2022, arrived at the Maitama, Abuja home of a former governor of Imo State, Senator Rochas Okorocha, to effect his arrest.

“The move followed the refusal of the former governor to honour invitations after jumping the administrative bail earlier granted him by the commission.”

The release added that EFCC had, on January 24, filed a 17-count criminal charge bordering on diversion of public funds and properties to the tune of N2.9 billion against Okorocha.

“The case was assigned to Justice Inyang Ekwo of the Federal High Court, Abuja, but attempts to arraign Senator Okorocha were twice stalled, owing to the absence of the ex-governor who evaded service of processes.

“At the last adjourned date, March 28, 2022, Justice Ekwo, before adjourning until May 30, 2022, had warned that it was ‘the last adjournment I shall grant in this matter’.

“In the circumstances, the commission is left with no option but to effect the arrest of Senator Okorocha and bring him to trial.”

Okorocha, who served as governor between 2011 and 2019, has been having a long-drawn battle with the anti-graft agency since leaving office on May 29, 2019, with the commission claiming that he had refused to honour several invitations it sent to him.

EFCC had, on July 23, 2019, shortly after he left office, seized some properties in Owerri, which it alleged were linked to the senator, his wife, Nkechi; daughter, Uloma Okorocha-Nwosu, and a former principal secretary to the former governor, Dr Paschal Oni, allegedly acquired with funds from Imo State government coffers during Okorocha’s eight-year tenure as governor.

In March, EFCC obtained an order of the Abuja division of the Federal High Court to seize a property located at Plot 1033 and 1033 Cadastral Zone A03, Takum Close, off Michika Street, Ahmadu Bello Way, Garki, Abuja, belonging to Okorocha through an ex parte application.

The order of interim forfeiture was granted by Justice Emeka following the commission’s claim that it suspected that the property was part of proceeds of unlawful activities of the senator.

The commission has also filed a 17-count charge against the former governor before the Federal High Court, Abuja, for his alleged complicity in a N2.9 billion fraud.

Therapeutic benefits of writing come to the fore at Ebedi