‘How culture, tourism can drive AU-ECOSOCC’

Arts and Culture
By Akintayo Abodunrin On Mar 1, 2020 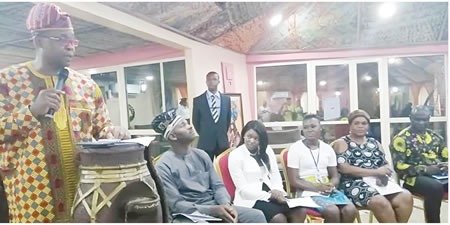 THE Founder and President of La Campagne Tropicana Beach Resort, Wanle Akinboboye has said that Africa’s culture and tourism sector is capable of generating 60 million jobs if there are correct policies and peace on the continent.

He explained that actualising the Agenda 2063 of the African Union-Economic Social and Cultural Council, known as AU-ECOSOCC-Nigeria, would go a long way in achieving this.

Akinboboye made this known at the close of the brainstorming session of the AU-ECOSOCC led by the Country Representative, John Oba Olasunkanmi, in partnership with his Continent Building Initiative.

The resort owner who was recently made an Advisor to AU-ECOSOCC-Nigeria, to help the body in achieving its Agenda 2063, said there are prospects of creating over 60 million jobs in various sectors across the continent through the intervention of AU-ECOSOCC-Nigeria.

He said: “We are hoping to create over 60 million jobs with this initiative, that is our aim, hope and aspiration,” adding that peace is all that’s needed.

“We will create peace in Africa through wealth creation. Because to have peace you begin first by creating wealth and not through buying arms and ammunition. The billions of dollars you use in buying arms and ammunition, use it to feed the people by creating wealth. When people are well-fed, they will be afraid to fight or die. Therefore, the commitment of this platform is to ensure that this message gets across to everyone and the governments of Africa.”

He then revealed that the 10 focal points devised for the platform during the session were aimed at wealth creation and that culture would play a critical role.

“We will leverage on our culture and creativity because Africans must create a platform for the world to patronise Africa,” while admonishing African leaders on purposeful leadership.

Speaking earlier, the Nigerian Representative at the AU-ECOSOCCO-Nigeria, Oba Olasunkanmi John, highlighted the seven aspirations of Agenda 2063 which he described as the African blueprint and masterplan for transforming Africa into a global powerhouse of the future.

According to him, the genesis of Agenda 2063 was the realisation by African leaders that there was a need to refocus and reprioritise Africa’s plan from the struggle against apartheid and the attainment of political independence for the continent.

Agenda 2063 also rests on critical programmes and initiatives which have been identified as key to accelerating Africa’s economic growth and development as well as promoting the continent’s shared identity.

They include infrastructure, education, science, technology, arts and culture, as well as agriculture.

He reiterated that the programmes had been outlined in partnership with the Continent Building Initiative, which Akinboboye would spearhead.

John also expressed confidence in Akinboboye’s ability to deliver on the project.

The partnership will see La Campagne Tropicana Beach Resort serve as the Lagos secretary for the AU-ECOSOCC-Nigeria for the public to engage with the union.  It will also be hosting the World Forest Day/Tree Planting Day, Africa Youths Leadership summit, Nigeria Gemstones and Solid Mineral exhibition, East & West Amalgamation through Tourism & Creative Arts – Movie: Adisa Lagos, Francophone & Anglophone Amalgamation through Tourism & Creative Arts – Movie: Je taime, Announcement of Destination Creation, as well as the replication of the resort, Atunda Entertainment and  Corporate Guards throughout Africa.