How Buhari has run Nigeria in 6 years 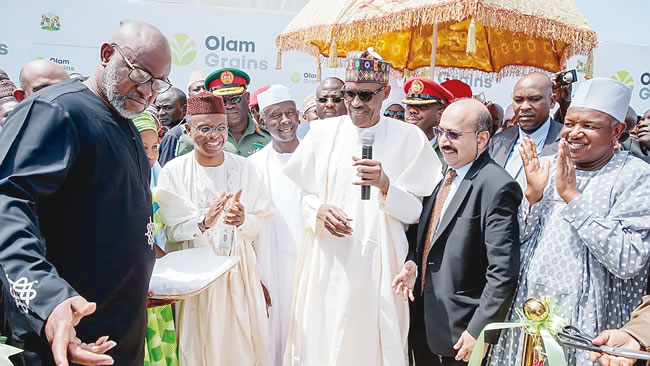 In 2015, the President Muhammadu Buhari administration began what it termed a ‘change’ agenda which would prioritise improved security, economic recovery programmes, halting the pillage of the economy by corrupt public officials, and creating employment opportunities for the youths. Although the past six years have not been without challenges, a review of the current administration from agriculture to infrastructure, job creation, welfare schemes, health initiatives, among others, shows that the tentacles have spread into improving various sectors of the polity across all areas – whether urban or rural.

The Anchor Borrowers’Programme (ABP) of the Central Bank of Nigeria, launched by President Muhammadu Buhari on November 17, 2015 – according to Godwin Emefiele, CBN governor — has made overN300 billion available to more than three million smallholder farmers of 21 different commodities (including rice, wheat, maize, cotton, cassava, poultry, soy beans, groundnut, and fish), cultivating over 3.8 million hectares of farmland. The Presidential Fertiliser Initiative was launched as a government-to-government partnership between the Nigerian and Moroccan Governments in December 2016. The PFI produced 12million 50kg bags of NPK 20:10:10 equivalent in 2020, bringing total production since inception to over 30 million 50kg bags equivalent; and number of participating blending plants increased to 44 from three at inception.

Under the Special-Agro Industrial Processing Zones (SAPZ) Programme, agro-processing centres are expected to be established across the country and provide basic infrastructure such as water, electricity and roads as well as facilities for skills training. Seven states and the FCT which have been selected for the pilot phase include Ogun, Oyo, Imo, Cross River, Kano, Kaduna, Kwara. Equally, the Green Imperative – a Nigeria-Brazil Agricultural MechanisationProgramme– is aimed at boosting agricultural production in Nigeria. The National Assembly has also approved a loan for the financing of the programme, which will involve the development of 632 privately-operated primary production (mechanisation) Service Centers and 142 Agro processing (value addition) service Centres across the 774 LGAs, and the reactivation of 6 privately-owned partially-operational or moribund tractor assembly plants nationwide.

In 2016, President Buhari launched the National Social Investment Programme, currently the largest such programme in Africa and one of the largest in the world. Currently, the National Social Register of poor and vulnerable Nigerians (NSR) has 32.6 million persons from more than 7 million poor and vulnerable households, identified across 708 local government areas, 8,723 wards and 86,610 communities across the country. From this number, 1.6 million poor and vulnerable households are currently benefiting from the Conditional Cash Transfer (CCT) programme, which, according to the federal government, pays a bimonthly stipend of N10,000 per household.

In the area of road infrastructure, the Presidential Infrastructure Development Fund (PIDF) – launched in 2018 –has invested over one billion dollars in three flagship projects: Lagos-Ibadan Expressway, Second Niger Bridge, Abuja-Kaduna-Zaria-Kano Expressway. This bid also saw the enactment of Executive Order 7 mobilising private investment into the development of key roads and bridges like Bodo-Bonny in Rivers and Apapa-Oshodi-Oworonshoki-Ojota in Lagos. In this direction was also the establishment of the Highway Development and Management Initiative (HDMI), a public-private partnership program to mobilise, in its first phase with over a trillion naira in private investment into the development and maintenance of 12 roads, amounting to 1,963km in length.

More recently, the administration approved the establishment of InfraCo Plc, an infrastructure development vehicle, wholly focused on Nigeria, with combined debt and equity take-off capital of N15 trillion, and managed by an independent infrastructure fund manager. Before the establishment of InfraCo, there was also the Presidential Infrastructure Development Fund (PIDF), with more than $1 billion in funding so far. Also, the Nigerian Sovereign Investment Authority (NSIA) reportedly witnessed total additional inflows from the government of around US$2 billion since the original US$1 billion which the fund kicked off with in 2012. The Nigeria Innovation Fund by the NSIA was launched to address investment opportunities in the domestic technology sector: data networking, datacenters, software, Agri-tech, Bio-tech, etc.

In January 2019, President Buhari launched Nigeria’s Micro-Pension Scheme – which allows self-employed persons and persons working in organisations with less than 3 employees to save for the provision of pension at retirement or incapacitation. There was also the establishment of Survival Fund, National Youth Investment Fund, and National Special Public Works Programme (774,000 beneficiaries across 774 LGAs nationwide), and the Central Bank’s Covid-19 N300 billion Targeted Credit Facility (TCF)– more than N150 billion disbursed so far –to support millions of small businesses, households and young people,with federal grants, loans and stipends. The Survival Fund has provided its grants (Payroll Support, Artisan and Transport Sector grants, and General MSME grants) to more than 800,000beneficiaries, since the last quarter of 2020. It has also provided free business registration to more than 200,000 MSMEs across the country. There is also the presidential approval for the establishment of the Nigeria Investment and Growth Fund (NIG-Fund) in 2021.

Under the World Bank-supported Innovation Development & Effectiveness in the Acquisition of Skills (IDEAS) Project, approved in 2020, US$200million is reported to be invested in six participating States (Abia, Benue, Ekiti, Gombe, Kano, Edo) as well as 20 federal science and technical colleges nationwide. Implementation will be steppedup in 2021 to afford millions of Nigerian youths the opportunity to acquire hands-on skills to effectively contribute to national development.

In the area of grants to state governments, according to the present administration, at least $2.5 million has been disbursed to each state of the federation and the FCT, under the Saving One Million Lives (SOML) initiative, to improve health outcomes. For the first time since the National Health Act was passed in 2014, the Federal Government in 2018 began including the 1% minimum portion of the Consolidated Revenue Fund – amounting to N55 billion in 2018 – to fund the Basic Health Care Provision Fund (BHCPF). The fund is designed to deliver a guaranteed set health services to all Nigerians, through the national network of Primary Health Care centers.

As part of his response to the coronavirus pandemic, President Buhari approved a grant of N5 billion for the Nigeria Centre for Disease Control (NCDC) in March 2020. Equally, a number of key federal hospitals across the country are being upgraded to effectively manage cancer and other major health challenges. However, back in March 2018, the Nigeria Sovereign Investment Authority (NSIA) invested US$10 million to establish a world-class Cancer Treatment Centre at the Lagos University Teaching Hospital (LUTH), while US$5million each was earmarked for the Aminu Kano University Teaching Hospital and the Federal Medical Centre, Umuahia, to establish modern diagnostic centres.

The development efforts spread to the Niger Delta, one of which is the resumption of work on the 337km East-West Road project, originally awarded in 2006. There is also the setting aside of US$170million seed funding for the Ogoni clean-up, in an Escrow Account established for that purpose. The Escrow Agreement Signing Ceremony took place in April 2018. The clean-up commenced in January 2019, with the handover of the first batch of 21 sites to the selected remediation firms, after a procurement process. As of March 2021, 16 of the first 21 sites had been certified cleaned. Also, approvals have been granted for the establishment of private-sector-led Modular Refineries across the nine States of the Niger Delta – the first three refineries have now been completed, while construction is ongoing on others. Also noteworthy is the take-off of the Nigerian Maritime University in Okerenkoko, Delta State.

In the area of asset recovery, the Presidential Advisory Committee Against Corruption (PACAC) has helped anti-corruption agencies devise clearer strategies for obtaining forfeiture of assets suspected to have been acquired fraudulently, mainly from state coffers, before prosecuting suspected culprits. Part of this work has involved reviewing existing laws (like the Money Laundering Act, 2004, the EFCC Act, 2004 and the ICPC Act, 2000), to identify and highlight sections directly conferring powers of forfeiture on Nigeria’s anti-corruption agencies. This advocacy has led to a significant increase in the use of Non-Conviction Based Asset Forfeiture Mechanisms by anti-corruption agencies.

In addition, the ICPC’s scrutiny of practices, systems and procedures of MDAs’ personnel cost from 2019 to 2020, yielded N189 billion in recoveries from inflated personnel budgets. In 2019 alone, ICPC said it recovered N32 billion worth of land, buildings and vehicles. The ICPC’s audit of constituency projects covering 2015 to 2018 helped recover N2 billion of diverted funds and assets.

As part of Criminal Justice Reforms, President Buhari in 2020 granted amnesty to 2,600 prisoners nationwide, representing about 3.5 percent of all inmates, in a bid to decongest Nigeria’s prison population. The beneficiaries were those 60 years and above; those suffering from ill-health that might likely lead to death; convicts serving three years and above and have less than six months to serve; inmates with mental health challenges; and inmates with a pending fine not exceeding N50,000 and with no pending cases. Presidential approval for commencement of the Community Policing Programme nationwide, and release of take-off funding has been announced. The community policing programme has now been enshrined into the Police Act, 2020.

‘My husband duped me, lied that he was executing projects, took another wife after I paid our rent’

I have what it takes to serve FCT people productively —AMAC chairmanship hopeful, Mina Horsfall

NYSC: Still relevant or due for the thrash can?