How bad roads make commuting a burden on Ekiti residents 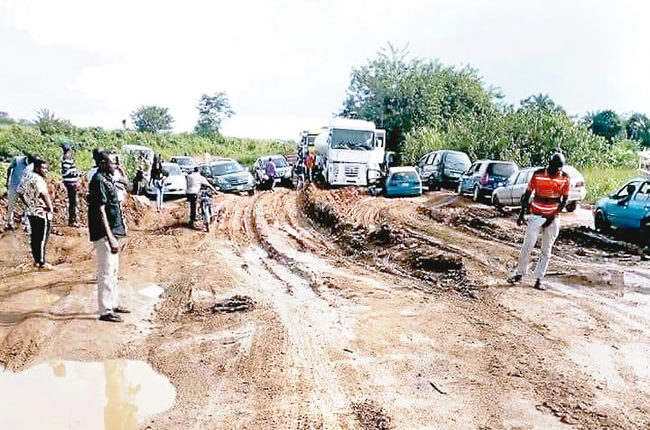 Yomi Ayeleso in this report chronicles the challenges faced by road users in Ekiti state while commuting on federal roads.

For the people in Ekiti State, traveling is not an enjoyable experience again as nearly all the federal roads are in a deplorable state, constituting grave danger, causing series of avoidable accidents, long hours on the road for short journeys and vulnerability to kidnaps as kidnappers now take advantage of the failed portions along these roads to pounce on travelers.

These worst roads that have been highlighted by people include the Ado Ekiti-Akure road, Ado Ekiti-Ikare road, Ado-Aramoko-Itawure road, Ado-Ifaki–Ido Ekiti road and Ifaki–Oye Ekiti–Ikole–Omuo road. Others are Omuo–Kabba road stretching to some local council areas in Kogi, Omuo-Oke road and Agbe–Ikare road which have been abandoned for years.

The condition of these roads, especially the Ado – Akure road, has been a source of worry to residents and travellers, who repeatedly witness tragic accidents  and are forced to pay high fares because motorists claim they spend more money to maintain their vehicles due to the state of the roads.

The Federal Executive Council had in 2019 approved the rehabilitation of the 36 kilometers Ado-Ekiti–Igede-Aramoko-Itawure road for about N14 billion. The Minister of Works, Babatunde Fashola in a statement said the contract which was awarded to Messrs Deux Projects Limited/Hitech Construction Company Limited was expected to be completed in 30 months.

Also, the dualization of Ado-Ekiti – Akure road which was approved in early 2020 by the Federal Government to Dantata & Sawoe contracting firm for a little over N22 billion had been abandoned with little or nothing happening on the road.

In the last one week, travellers and  motorists plying Ado-Akure road faced tough time with many stranded for hours due to the blockage of the road by heavy duty vehicles. The traffic congestion currently being experienced along the route and other roads in the state was caused by the collapsed sections in Jebba road in Kwara State and the Kabba axis of the Abuja road.

Observation has revealed that all roads, both state and federal, in Ekiti State has become the routes for North and South-bound trucks in recent times, forcing commuters to spend three to four hours on the dilapidated road, in addition to becoming death traps and kidnapping zones.

A traveler, Mrs Abosede Ige-Akintade who witnessed the gridlock along Akure-Ado road on Sunday, told Nigerian Tribune that it was a harrowing experience for many motorists on the road. She revealed that a journey from Akure to Ado-Ekiti which ordinarily should take less than one hour has now turned to over five hours.

According to the popular event planner, after waiting endlessly on the road with no hope of breakthrough, she decided to make a detour to Akure and make use of the alternative road of Igbara-Oke-Igbara odo -Ilawe-Ado road.

“There was a total gridlock after Police College coming from Akure on Sunday. In order not to disappoint my customer, I took another route to Iju by retuning to Akure to face the Igbara Oke-Igbara Odo-ilawe Ekiti-Ado Ekiti-Ikere Ekiti. Do we have government at all? If we have, is blood flowing through their veins? These leaders have failed the people considering the embarrassing state of the road,” she said.

Also, a driver Kunle Olatunji, lamented that the situation of the road has made many of his colleagues to ignore plying the Ado-Akure road in view of the gridlock for hours and the effect on the vehicles. He wondered why the road which was awarded in 2020 has not witnessed any significant work considering the fact that the two states are being governed by the ruling All Progressives Congress (APC) with the Federal government.

“The road is the worst at the moment and I can tell you that the journey (Ado-Akure) which should be about an hour is now up to five hours due to the deplorable condition of the road. After series of outcries, this road was awarded last year with much publication in the media and now you can see the situation. This is embarrassing and sad,” Olatunji stated.

The Ekiti State governor, Dr Kayode Fayemi, during a recent television interview, lamented the slow pace of work on the Ado-Akure dualisation road by the contractor, adding that he, alongside his Ondo state counterpart, Rotimi Akeredolu, had planned to source for funds to work on the road but was frustrated by the Federal Government.

In the alternative, Fayemi revealed that he had worked on the Ado-Ilawe-Akure route which is now in good condition for people to use in linking the Ondo state capital from Ado-Ekiti.

When contacted, the Federal Controller of Works for Ekiti State, Mr Ishaq Lawal, noted that most of the roads in the state have been awarded to contractors, including the Ado-Akure road, and that the office is expecting the contractors to report for the work.

“We have made proposals for these roads in the state to our headquarters and we are expecting positive response in a bid to continue full rehabilitation on the roads. That of Ado -Akure has been awarded and my colleague in Ondo state will have more information on it and give you the status. We have written proposal, Ado-Aramoko-Itawure road has been awarded and very soon the contractors will be around. In no small time, we are expecting the contractors in the state,” he said.

Worried by the unpleasant development, the chairman, House of Representatives Committee on Federal Road Maintenance Agency (FERMA), Honourable Femi Bamisile, said the staggering sum of N460 billion budgeted for construction and maintenance of federal roads in 2021 appropriation law was not having any positive effect on Nigerians.

Bemoaning the state of federal roads and how commuters were being stuck on them due to collapsed bridges or cases of deplorable conditions, Bamisile described the N30 billion allocated to FERMA out of the budgetary provision to Works Ministry, as “paltry, wicked and insensitive.”

The All Progressives Congress lawmaker who spoke in Aramoko-Ekiti, Ekiti West Local Government Area of Ekiti State, at the weekend while addressing some angry commuters who got stranded along Igede-Aramoko-Efon road, also visited Ado-Ilawe-Igbara-Oke and Ado-Ikere-Akure road, where similar situations were experienced.

The federal lawmaker, representing Gbonyin/Ekiti East/Emure federal constituency who lamented the harrowing experiences of the motorists, said FERMA had begun reconstruction of a bridge that collapsed at Ijan Ekiti, Gbonyin local government area and causing traffic gridlock along Ado-Ijan-Ikare road.

“The Federal Ministry of Works got a total of N460 billion in the budget and N30 billion was given  to FERMA. This is too small for a body saddled with maintenance and rehabilitation  of roads across Nigeria. Nigerians cannot be treated this way.

“There should be a serious reform in the way our federal roads are being maintained. Let all the monies being allocated be structured accordingly, so that Nigerians can be rescued from this mess.  On my return to Abuja, I will take this matter up. I have been to the North, South and everywhere. We are experiencing bad roads and this is because of poor funding and this must change because Nigerians are really suffering,” he stated.

Bamisile begged the stranded motorists not to resort to violence for they have no other country than Nigeria, saying he will ensure that all the barricades are removed. On the best panacea to the deplorable roads in the country, he appealed to the Federal government to grant tax relief to Aliko Dangote and also adopt concrete tarring to ensure durability.

“The best and most modern method of construction now is concrete tarring . That  was what Dangote adopted in construction of Lokoja-Obajana road .The government should also grant tax relief to Dangote for it to be able to perform more Corporate Social Responsibilities to Nigerians. If the Company is allowed to do this, it will help us. All these we are experiencing on our roads should not be happening in a city, it can only happen in the jungle,” Bamisile lamented.

Why we killed one of our victims —Kaduna kidnap gang members

UNILAG to install 1,000 new CCTV cameras to beef up security

‘She said she wanted to be ‘daddy’s wife’, competed with my wife’