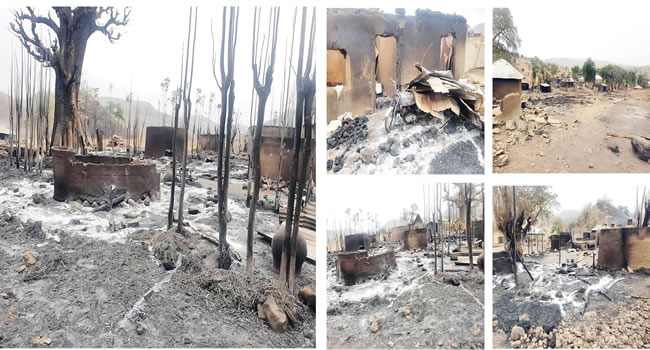 NYUWAR and Jessu districts in Balanga Local Government Area of Gombe State have the most difficult terrains in the state because of their mountainous nature and lack of good access roads. The inhabitants who are mostly the Longuda tribe are peace-loving people. But their peace was shattered recently when armed invaders called. The assailants killed scores and set many buildings on fire, turning the villages into ghost towns.

For the people of the villages, Monday, 12, and Tuesday, 13 April, 2021, will not be forgotten in a hurry. Those dates mark the destruction of their villages and massacre of their loved ones by yet to be identified persons who used the cover of darkness to perpetrate their night-time attack.

“We were asleep in our homes when a group of men armed with various kinds of dangerous weapons invaded our community and started setting our houses and food storage facilities ablaze. They asked us to vacate the land or they would wipe out the entire Lunguda tribal communities.”

Those were the words of Mr Yohanna Istifanus, the representative of the district head of Nyuwar, James Pisagih, on how his community was attacked. Istifanus spoke when the Gombe State governor, Muhammadu Inuwa Yahaya, paid an assessment visit to the area.

The community leader added: “The attack claimed the lives of eight of our people as we were caught off guard. The attackers threatened to return with the expectation of having a field day like they did earlier. But with the presence of His Excellency, the Governor, and his prompt intervention through the deployment of security agencies, we are happy and pray that the law will take its course on the perpetrators.”

At Jessu, a community leader, Mr Jason Jase, who conducted the governor round, said that seven persons were killed in the community and several houses and food storage facilities incinerated.

A source told Saturday Tribune that the attacks could be traced to conflicts that has existed between the Waja people and Longuda people in Adamawa since 2018.

Galiyos Zullum is the national chairman of the Nyuwar Community Development Association (NCDA). He said: ”The dates, 12 and 13 April, 2021, were the saddest days in the history of Nyuwar, when the community was attacked by Waja militants in the night, without any notice. The militants stormed the community around 9.00 p.m. in their hundreds and started burning our houses, throwing the community into confusion. It was not a communal clash as some people claim. The security agencies were alerted for protection but no help came. The attack lasted for 13 hours. We thought help would come but it didn’t. The Waja militants got reinforcement from other Waja militants in neighbouring communities and came down harder on our peaceful community. By 7.00 a.m., they started killing people and burning houses. That lasted for four hours. Before the army and the police came, many houses had been burnt. Thirteen men lost their lives, two of them beheaded, and many other persons were injured.

“One could ask: what is the offence of the community? Why is the community being attacked? Nyuwar is known to be a peace-loving community that has hosted the Waja and Fulani for so many years. There have been intermarriages among us. No one could have thought Longuda and Waja in Nyuwar could ever fight each other. It is surprising that things happened this way.

“One may say that the reason for these attacks is envy: they want Nyuwar brought down because the community is developing so fast. Secondly, the Waja issued a threat letter dated 10 February, 2021 that they would wipe out the Lunguda race, sparing only women and children, for they want to extend their control to Longuda lands. They are carrying out the threat.

”The paramount ruler of Waja chiefdom, the Bala Waja, His Royal Highness, Mohammed Danjuma Mohammed, and the security organs were shown that letter but there was no indication that they acted on it. In March 2020, some Waja youths in Gilengitu drove away some women who were clearing their farm lands. They said no Longuda person would farm in Gilengitu any longer. This case was reported to the district head for resolution but the Waja youths said they didn’t have any chief in Nyuwar, so they refused to come to the palace. The issue was again reported to the paramount ruler of Waja chiefdom but he encouraged them to continue farming on those lands. Still, a peace-building meeting was called by the district head of Nyuwar, His Royal Highness, Mr James Pisagih, and the Longuda farm owners agreed to let go of the farms for peace to reign but yet, they attacked the Longuda community.”

Zullum said the way out of the crisis is: “One, the government should constitute a committee to investigate the causes of these attacks on the Longuda community and those found wanting should face the wrath of the law; two, the Waja community should be made to understand that those farm lands were given to their forefathers by the Lunguda in Nyuwar; three, the  Longuda districts of Jessu, Nyuwar and  Wala Longuda should be given their autonomy (Longuda chiefdom); four, the government should always be proactive in situations like this; and five, the paramount ruler of Waja chiefdom should bring all districts together because Waja chiefdom is the only federated chiefdom in Gombe State where male Waja and Longuda, by law, can aspire to the throne.”

Another source who pleaded for anonymity said: “It is this animosity (from Adamawa State) that has degenerated and spread to Gombe State and the Longuda are now under unwarranted incessant attacks. There have been silent killings in our farming areas in Shibo. The fight has even assumed a religious dimension among the Waja people. You hear shouts of ‘Allahu Akbar’ from the attackers. This is the fact of the case of the attacks by the Waja people on Longuda communities.

“Jessu was attacked on the 12th of April in the night. Despite calls to the security agencies, only eight agents arrived after the the attack on the entire Gabikashaun village in the Jessu district of Balanga in Gombe State. Seven persons were killed and houses were burnt, the villagers rendered homeless. The governor has visited the affected communities and declared curfew there. More security agents have been deployed but the situation is still dicey.”

Another indigene spoke anonymously on the fate that had befallen the Nyuwar people. He said: “We have committed no offence. The killers are our neighbours, the Waja tribespeople that have lived peacefully with the Longuda for ages. We have intermarried so much so that we can hardly be differentiated.

“The problem started last year. There were disputes bordering on farmlands but the issues were not properly handled by the authorities. This led to disagreements between Waja and Longuda in Heme-Jessu and Jakuri-Tsibau in Nyuwar. The Wajas attacked Heme in Jessu and moved to Nyuwar that did not know there was any problem that day. There, houses completely razed. Apart from last year’s crisis which the people of Nyuwar resisted, there has been no problem. Basically, the farms are owned by the Longudas but the Wajas who migrated to the villages want to lay claim to the lands and take them over. They are Waja people from among us. They carried out the attacks with the support of other Waja communities around. They were armed with sophisticated weapons which was why our people had to flee. They had a field day killing the weak and burning houses.

“There is clearly a religious undertone as witnessed last year when the Wajas took over farms from Longuda and hoisted Islamic flags with inscriptions that they must take over the community and turn it into an Islamic place.

“The only solution is the creation of the Longuda chiefdom, giving them a paramount ruler of their own as the unholy marriage between the two tribes is not working. Anything short of that will be postponing the dooms day which has started coming with the burning of the communities last Tuesday. The Longuda and Wajas were brought together by colonial administrators and they learned to live together until now that some religious fanatics are trying to bring division.”

In a swift response to the crisis, Governor Inuwa Yahaya led heads of security agencies and top state officials on a visit to Nyuwar, Jessu and Yolde communities in Balanga Local Government Area of the state where lives were lost and property worth millions of naira destroyed as a result of the clashes involving Waja and Longuda ethnic groups.

Inuwa Yahaya, upon arrival in the most affected communities of Nyuwar and Jessu, interacted with the community leaders and youths on the genesis of the crisis. He sympathised with them and assured them that his administration would not fold its arms and allow such an incident to happen again.

The governor said: “As you can see, I am leading all heads of security agencies in Gombe State to your community just to show you how committed the government is to ensuring that this crisis is brought to an end. I want to inform you that one of the measures we have taken was to impose a curfew to check movements of everyone and we have deployed security personnel to protect you and your property until normalcy is restored.

“Let me extend my heartfelt condolences to you over the loss of precious lives and property as a result of this senseless act. Our thoughts and prayers are with you and we are conscious of our responsibility of safeguarding the lives and property of our people.”

The governor said security operatives would work with the people to identify all those responsible for the heinous act for arrest and prosecution. While appealing to the communities to cooperate with the government and security agencies, he gave the assurance that the state government would provide relief materials to the victims to cushion their sufferings.

Re: Pantami is my friend but can’t be defended