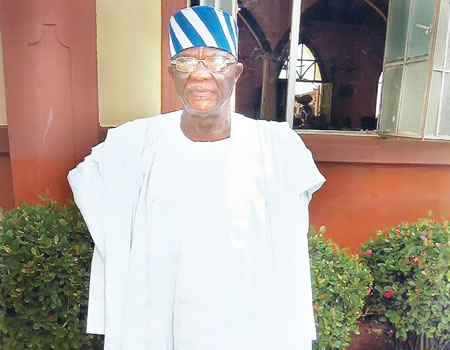 Octogenarian, Mr Yekini Olugbenga Ogunnaiya, is a former protocol officer of the Nigerian Embassy in the United States of America. In this interview with BAYO ALADE, he gives an insight into his background, the difficult years of growing up having dropped out of school, finding his way back and studying up to masters degree level. Excerpts:

My childhood was adventurous, but to some others, it was fraught with difficulties, while some may consider it as normal. Those who know me agree that the journey from poor childhood to adulthood and eventually, success, was through a tortuous path, or how else can we explain a child with a great academic potential who abandoned education and took to a not so glamorous trade of being a conductor of Bolekaja, a locally-built truck?

The thought of having any western education did not come until 1947. I was enrolled at an Arabic study centre known even then it was prompted by the insults and abuses I got from one of my cousins, Segun Adenubi, at a football field. He abused me in English language and I could not respond because I didn’t understand the language.

This incident made me not to attend the Arabic school again. I enrolled at St John’s Anglican School, Ijebu Igbo, in January 1948. I excelled and with other Muslim students, I proceeded to Muslim School, also in Ijebu Igbo, where I did my Standard Three.

I dropped out of school in Standard Four due to the wickedness of one of my teachers and my own stubbornness. It was a battle of supremacy. Due to my brilliance, I was nicknamed Lacombe because of the Lacombe Arithmetic textbook that I used then. After dropping out of school, I went to training as a butcher where I earned the nickname Ora.

After this, I became a conductor and travelled with Bolekaja from Ijebu Igbo to Ibadan and Lagos. But with all these, my mother wanted me to go to school. For my father, my refusal to go to school meant that he would have an extra hand on the farm. But I refused to go to farm. I stuck to my work as a conductor. One day when I was doing my conductor work, we were asked by some students of then University College Ibadan (now University of Ibadan) to respond to their requests.

The driver of the truck was not lettered, so any time the students needed anything, it was my responsibility to respond to their requests. As the journey continued, some started alighting at various destinations. One of the students told me that if I failed to get back to school, I would end up being a slave to my contemporaries.

The statement started to re-echo in my brain and I vowed that I would go back to school. But it took great persuasion and an obvious burning desire for education before the headmaster of the school allowed me to register for my entrance examination because I had been away from school for more than three years. I passed my school leaving certificate examination in December that year. But I failed to proceed to secondary school because no one was ready to help me. I became a petrol station attendant and then a driver to a court registrar.

How did you get the job as Independence Day celebration driver?

I saw an advertisement in a newspaper for drivers during the Independence Day celebrations due to my habit of reading newspapers regularly. I took permission from my boss, Mr Scot, the court registrar, that I wanted to send money to my mother at Iddo Motor Park. He gave me permission and that was how I got employed. But the interview was not easy because it was handled by a military officer from Scotland Yard and the organisers of the Independence Day celebrations had instructed them to recruit trainable people who would drive to specifications as well as those who could communicate in English language. After undergoing successful medical tests, I was given one month to resume at my new place of work. I was faced with a challenge on how to lie to my boss that my mother had bought me a car to do commercial driving in my home town from part of the money I was sending for her upkeep. Against my expectation, he was excited. He congratulated me on the success and allowed me to go.

I resigned my appointment in preparation for my new job at Independence Car Park, which later changed name to Conference Visitors Unit (CVU) located at Obalende, Lagos. The job proved to be my turning point. I was earning twenty six pounds per month, excluding certain allowances and opportunities.

Were there any opportunities for you while working as a driver with the colonial government?

In fact, a trainer from Scotland Yard was around to impact driving skills such as the pull and push system and uniform acceleration. That means when one is driving at a particular speed, he must not increase the speed if he intends to slow down soon. It’s the standard way of driving. Apart from the salary and the driving skills, all the drivers were each kitted with six green suits (some were given white) with shirts and black neckties. Corporate dressing was very important. Drivers were often among the first set of people to have contacts with foreign dignitaries coming for the Independence celebration. I was 22 years old with a dream job. I handled my car with care and was always neat. Close to 4,000 drivers were hired, but some were sacked before the Independence celebration for rough driving and dirty appearances. I got two awards before the Independence for proper driving of the car assigned to me, a Ford Galaxy with registration number IND 226. I was one of the best drivers.

Who was the person you were assigned to work with?

The Prime Minister of Malaya (now called Malaysia). I made sure he was comfortable in Nigeria. The first day of the Malaya Premier’s arrival, I got to the airport very early waiting for him. I drove him to Ibadan to visit some friends and also for sight-seeing. The post-Independence event lasted for about a week and I was willing to work. They gave us extra hours or days that we worked. When the Malaya Prime Minister was eventually leaving Nigeria, he gave me 800 shillings, the total amount of coins left over with him.

Apart from that, what other things did you benefit from him?

He also wrote a letter of commendation and appreciation to the Nigerian government, thanking the authorities for making his stay a memorable one. It was based on this letter that I got an award. The award also came with my promotion to the position of a transport clerk. I was put in charge of other drivers and was responsible for assigning them work to do and recording their movements.

After the independence ceremonies, what other things did you do to serve the country?

When Nigeria hosted the All Africa Conference, the conference gave me another opportunity to prove my driving skills. For the four days that the conference lasted, I worked both as a transport clerk and a special driver. During the conference, I was assigned to the then Liberian Secretary of State. I was with him for his nine-day stay in Nigeria. During his stay, the Liberian diplomat was very pleased with my service. I made him feel at home and this led to monetary reward. He also told a fellow countryman and a junior diplomat coming to Nigeria for another conference at another time to request for my services.

What’s the name of the diplomat and why was he in Nigeria?

Mr. Charles Ansford, who represented Liberia at the conference tagged: “World Peace Thorough the Law.” His stay in Nigeria was so memorable that he sought ways of rewarding me. As he was leaving Nigeria, he took a step which turned out to be the turning point in my life.

What was the step?

My boss asked me; YK, why is a man of your age a driver? YK was the name Ansford called me. I responded: “Sir, I have to survive and this is the only way for me now.” Mr. Ansford, who had been promoted as the Liberian Counsellor to the United States, felt pity for his driver, whom he considered as his friend. My boss asked me: “Hope you would not mind travelling with me to Washington DC?” I immediately agreed and my boss (Ansford) added: “I have no money to give you for your ticket, but I can help you to get your travel papers.” The offer gave me a new beginning in my life. It was more valuable than the money usually given by my other guests. Mr. Ansford got me a visa, even diplomatic visa, which means I could go in and out of the United States anytime. Due to youthful exuberance, I announced the news to my people in my home town, especially my family, some of who loved it and some who didn’t. But somehow, I lost interest in the trip. I’m sure I was under a spell.

What happened to your dream for higher education?

I thank God that I who was a bus conductor, butcher, barber, driver, at last, later bagged an MSc and MBA. By a stroke of luck after all the odd jobs I did, I later completed my high school education at Armstrong High School, Washington DC, in the United States of America. I worked for four years at the Nigerian Embassy in Washington DC as Protocol Officer before gaining admission into St Joseph’s University, Philadelphia, Pennsylvania, where I bagged my BS in Industrial Engineering before enrolling for MBA at Morgan State University, Baltimore, Maryland in 1973. It was a long journey.

At over 80, what do you want from government for the Independence Day drivers and others who contributed to the success of the ceremony?

They should immortalise us in any way they know how, which will encourage others to contribute their quota to the development of the country.

Is it by monetary reward or what?

As octogenarians, we are all old now. We will only need commendation from the current government or by giving national merit awards to those who are still alive because it’s just by the grace of God that we are still alive.

What is your philosophy about life?

My philosophy is to help poor relations, friends and the needy because I believe that givers never lack.