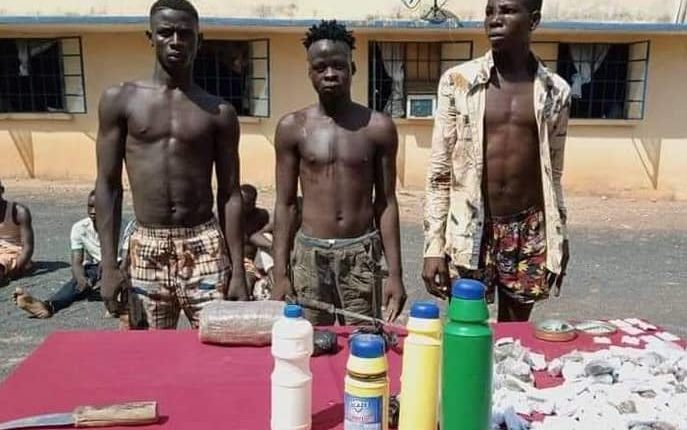 Thirteen members of a crime group in Adamawa State known as Shila Boys were on Wednesday, May 13, paraded after they were arrested for attacking residents of the state.

The newly-established Task Force to fight against crime in the state arrested the 13 members and recovered weapons as well as  tricycles in various hideouts in the state.

According to a statement on the website of the Adamawa State Police Command by the command’s Public Relations Officer, DSP Suleiman Yahaya Nguroje, the task force arrested the Shila Boys during their activity inside the state capital.

According to the release, several hideouts of the Shila Boys located on remote sides of Jambutu, Doubeli, Wauro-Jabbe and Sanda Primary School in Yola-North and South Local Government Areas have so far been dislodged by the team and the suspects arrested.

The statement added that the command also recovered two tricycles with registration numbers: YLA 027 WZ and GRE 335 QE, 10 knives, some quantities of illegal drugs and dried weeds suspected to be Indian hemp, among others.

According to DSP Suleiman Nguroje, the police commissioner, Olugbenga Adeyanju, formed the team to curtail the activities of the boys by targeting black spots or hideouts.