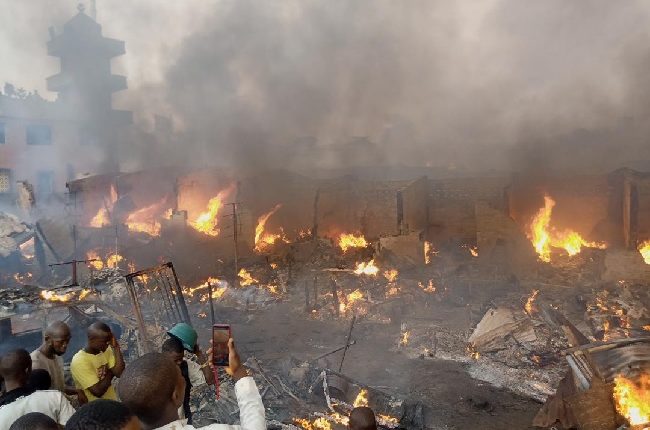 More details have emerged on last Saturday’s fire incident at the Agodi Gate auto spare parts market, Ibadan, with the disclosure that 1,222 shops were burnt in the inferno.

When Tribune Online visited on Monday, some of the 1,222 shop owners were seen scavenging through the rubbles with the hope of salvaging some metals, spare parts, tyres, while weak structures were being bulldozed.

However, many shop owners wore desolate faces as there was virtually little or nothing to salvage even as the fire was yet to be totally quenched in some parts of the affected section even about 72 hours after the fire broke out.

It was discovered that the fire had raged on due to blocked entrances into the market for fire service to quickly intervene and an electricity cable which fell on one of the shops where tyres are sold that was close to where metals are cut with gases such as acetylene and propane.

President, Agodi Gate Auto spare parts association, Ibadan, Mr Moruf Olanrewaju, who gave the 1,222 shop-count while speaking with Tribune Online, stated that goods worth billions of naira were lost in the incident.

He, like several other shop owners, described the fire incident as the worst ever disaster in the over 50 years history of the market.

Olanrewaju attributed the incident to a surge when electricity was restored to the market after several years of power outage.

He acknowledged that the market was also its own undoing by blocking access routes to the market and making accessibility difficult for men of the Oyo State Fire Service to quickly quench the inferno.

Aside from the challenge of poor accessibility and poor electricity supply, Olanrewaju also said the market was in need of a health centre, solar street lights, fire and water stations.

Recounting, Olanrewaju said, “The fire started from the tyre section and affected about 1,222 shops in this main market after we counted them. Those from the fire service got here and started helping to put out the fire. “Later when I went home, I heard some people blocked the road with a vehicle and didn’t allow them to work. Billions of naira were lost in this fire. And we were unable to take anything away from the rubbles.

“The market here started in 1970. I joined them here about eight years later. There was a surge in electricity supply when it was restored in the market. We had outstanding payment with IBEDC before now.

“We recently engaged them to restore power supply into the market. When we paid them on Monday, we asked them not to supply the power yet which they accepted pending the time all repairs would be done in all sections of the market.

“After the repairs, they supplied power on Wednesday but there was a spark somewhere. They stopped the supply of power in order to complete the repairs and then the power was later restored on Thursday.”

Olanrewaju downplayed calls for relocation of the market due to its clogged nature, arguing that the traders carried out their businesses without hindering other persons.

He added that the traders were keen on rebuilding the shops themselves and only needed assistance from the government and individuals, not the government assigning developers to rebuild the shops.

“This market is not as tight as claimed; even the governor reiterated it when he came here yesterday. He said he won’t make us leave here. We are not the only ones here and we are not disturbing anyone here.

“At Odejayi where one of our entrances is located, we were planning to repair it with N1.5 million and we are almost hitting our target. We are the ones doing the repair ourselves. The capacity of that road is 5 tonnes but we bring loads of 25 tonnes to this place and that is why we are repairing it.

“We have to rebuild. We don’t want developers on this site. Government should allow us to rebuild and they should support us any way they can. “Our fathers who started here made ends meet from the money they generated from utilising this market and many of them have died. They rented the space out and if you bring developers now, people won’t be able to benefit from the proceeds of renting it out. It will become government property.

“People of different nationals transact business here. Cameroon, Niger, South Africa and the Benin Republic but they didn’t see it as a very big market and there is no spare part you won’t find here,” Olanrewaju said.

In the past two weeks, Nigeria recorded 3,414 new COVID-19 infections, which is the lowest the country has recorded since the beginning of the second wave of the pandemic in December.How 1,222 shops were burnt in Ibadan market fire incident

Imo attacks: Gov Ikpeazu imposes curfew on Umuahia, Aba from 10 pm to 6 am