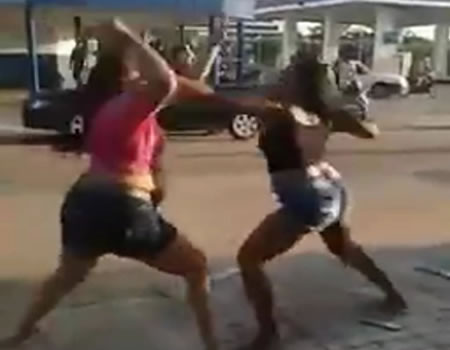 TWO married housewives reportedly stripped themselves naked in a brawl over the ownership of a widower in Okpoko community in Ogbaru local government area of Anambra State.

The two women, a civil servant and a petty trader (names withheld) were said to had clashed over their relationship with the widower, a commercial bus driver, identified as Chiemeziem.

Sunday Tribune gathered that both housewives had been warned to steer clear of the “lover boy” widower, but none heeded to the warning as the relationships continued.

A source close to the widower, told our correspondent that the widower, fondly called Emeziem, had repeatedly appealed to the women to see themselves as partners in the relationship than rivals.

“He threatened to dismiss any of them that caused quarrel. He even had to draw a roaster for their visits to ensure peace and forestall clash in the double-dating game,” the source said.

Trouble, however, started when one of the women broke the rules as she visited on the day meant for her rival.

“The trader was already with Emeziem when her civil servant rival showed up and as expected, heated argument started.

“The quarrel was so uncontrollable that he had to push both of them out of the house, lock the apartment and left in anger,” the source said.

The source further disclosed that attempts to broker peace between them by neighbours and sympathisers were unsuccessful as the brawl continued till they striped themselves naked.

Sunday Tribune gathered that both women, said to have had produced children for him, had since been dismissed by the widower following the ugly trend.

Why I dumped PDP, Shekarau reveals

It’s time for Nigeria to increase academic qualification for president, others…