With her in my house, my life is in danger, man tells court

Crime & Court
By Ayomide Owonibi-Odekanyin and Biola Azeez On Jul 9, 2016 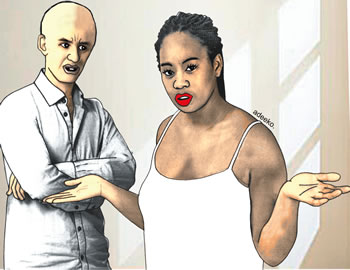 A man, Adeniyi Omolola, has dragged his wife, Funke Racheal, before a customary court at Centre Gbooro in Ilorin, the Kwara State capital presided over by Magistrate Ibrahim Abdulkadir.

Adeniyi is asking the court to put an end to the 16-year-old marriage between him and his wife.

The man, who said love had died between him and his wife, explained that it is because of sanctity of life that he has sought divorce, adding that he wanted his wife to go in peace.

He also accused his wife of attracting and causing too much trouble.

Adeniyi told the court that his wife came to bang the door to his room a night before he came before the court to seek divorce and broke all plates at home.

He said that Funke did not stop at breaking the plates, adding that he destroyed other valuables, while insisting that both of them should go their separate ways.

Meanwhile, Funke, in her own defence, said she is not a troublemaker contrary to the allegations levelled by her husband.

She said the issue of childlessness in her life, which she said her husband had not cared to pay the needed attention to, usually made her to misbehave.

Adeniyi’s wife, who said she was still in love with her husband, however, asked the court to allow her make amends to her and beg her husband.

But Adeniyi stood up against her wife’s appeal, telling the court that his life had been in danger.

He said his wife had been threatening his life with knife.

Magistrate Abdulkadir then adjourned further hearing in the matter till July 20 to give ample time for the couple to resolve their differences and possibly make amends.

The magistrate also told the couple to bring report on the possible solutions to their differences otherwise the court would have no option but to come up with its own resolution on the matter.

However, the magistrate cautioned Funke to behave well and watch her attitude in her relationship with her husband, saying that no harm should befall Adeniyi before the next hearing date.

The transience of power

‘Mummy’ fights naked, she no longer measures up to the standard of a wife…