How wife killed self, husband, 3 children in Makurdi

Features
By Johnson Babajide with agency report On Nov 4, 2018
Share

IT is one tragedy too many. An entire family of five has been completely wiped out in one fell swoop. Neighbours are still dumbfounded; and indeed, the whole residents of Makurdi, the Benue State capital were shocked to the marrow, when news broke that a woman had killed herself after snuffing life out of her husband and their three children. Even the state police command are yet to fully to come to terms with the weekend horror, as the bizarre spectacle has left a number of theories in its wake. One of the theories is said to be a sour relationship between the couples sometimes manifesting in open altercations and violence.

However, the police command confirmed the killing of the man and his three children by his wife, who also took her life. The man, Mr Nicholas Adetsav, a staff of Makurdi Local Government Council, and his children, were killed on Friday night in Makurdi. His wife, allegedly responsible for the death of the quartet, also killed herself, the police claimed on Saturday.

“From information available to us, the woman has been having issues with her husband which might have culminated into this,” Mr Moses Yamu, the command’s spokesman, told the News Agency 0f Nigeria (NAN), on Saturday in Makurdi. Yamu said that the couple, who lived at Vandeikya Street, were both staff of Makurdi Local Government Council.

“They have been having issues; just yesterday (Friday), the woman was seen with a pestle trying to smash her husband’s car. No one knows the cause of their frequent fights,” Yamu added.

He said that Police personnel sent to the house found the man foaming in the mouth, the three kids already dead, while the woman, also dead, was found holding a knife in her hands. “The incident happened around 8:30 p.m. on Friday; from what we have gathered, the couple fight on daily basis,” he told NAN.

Yamu said that investigation had begun toward determining the reasons for the actions, while the corpses had been deposited at the St Theresa’s Catholic Hospital mortuary, Makurdi. The Chairman, Makurdi Local Government Council, Mrs Akange Audu, confirmed that the couple were employees of the local government council. “The husband worked in the Department of Finance while his wife worked with the Department of Agriculture,” she said. She also confirmed that the couple “were always fighting,” adding that the woman had warned neighbours to stay off their fights.

Another version of the tragedy informed Sunda tribune that the couple was quarrelling as usual when the wife suddenly picked a pestle and hit  her husband on the head and thereafter took a knife and sliced his throat.

The woman was said to have gone into the bedroom where the three children were sleeping and hit them one after the other with a pestle and thereafter slashed their throats.

According to a neighbour the woman was said to have later descended on the husband’s car parked in front of their apartment and smashed it.

She was said to have retired into their apartment, locked up the door and stabbed herself to death.

At the time the woman was wreaking the havoc, she was said to have increased the volume of the television set making it impossible for the co-tenants to have any inkling of what was going on.

According to a co-tenant Joyce Toor, there was no light at the time of the problem, hence, the noise of generators did not allow them to know what was happening until they heard the heavy sound on the car.

“The incident happened around 8.30 in the night or thereabout, this time there was no light, at least three generators were on.

“But suddenly we just heard a sound on the parked car, few of us, rushed out to see what was happening but by then we heard the bang of the door of their apartment”, said  Toor. 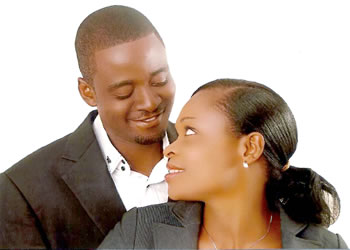 A neighbor who did not want his name mentioned, has this to say, “The problem is that no one dare go into the apartment because of the attitude of the woman, she had once stabbed a co tenant for dabbling into the affairs of the family, the case is still in court.

“So everyone just kept on watching until policemen came and forced the door opened only to see that the whole family had been wiped out.

“It was later we learned that the husband had made distress call to his elder brother who later invited the police,” the neighbor said.

A cross section of the neighbours, who spoke to NAN, said that the couple had been having issues. They said that the couple had been fighting since Friday afternoon, but no one appeared sure of the cause of their fights. One of the neighbours told NAN that she stopped intervening in their quarrels when Mrs. Adetsav threatened her with a knife during one of such interventions.