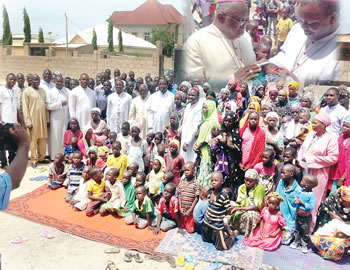 AS part of efforts to contribute to the welfare of persons displaced by insurgency in the North East, and as a means of rekindling hope in God, Maiduguri Catholic diocese played host to the bishops of Ibadan Province.

The visit began with the celebration of the Mass, which was presided over by Archbishop Abegunrin.

In his introductory remarks, he expressed delight for the opportunity to visit Maiduguri diocese, which is globally termed as the suffering church because of the activities of the insurgents and called on the people not to relent for there is always light at the end of the tunnel.

Bishop Badejo, in his homily, thanked the faithful for remaining Christians, for being steadfast and courageous despite the fierce persecution, basing his sermon on John 16:33.

He described the Bishop of Maiduguri diocese as being happy, patient and courageous enough in the midst of these overwhelming challenges, because of the good people of the diocese.

According to him, “the world is troubled by aggression, bloodshed, violence, selfishness and all sorts of greed and disrespect for human life. And we have two choices to make, either to run over and to give into despair and die or to continue to believe in the power of the Cross of Jesus Christ who saw suffering, marginalisation, deprivation and death and still emerged victorious.

“It is true that some people carry smaller crosses while obviously the people of Maiduguri carry bigger crosses, which is a source of blessing and encouragement to other people. Always remember that you are not standing alone.”

The Vicar (Administration) of Maiduguri diocese, Very Reverend Father Donatus Tizhe and the Local Ordinary of Maiduguri, Most Reverend (Dr) Oliver Dashe Doeme, expressed joy over the show of love and concern and assured the congregation that victory had already been won.

The visit was extended to the internally displaced persons camps (IDPs) in Wulari, the camp ground and the Catholic camp in Polo within Maiduguri metropolis, and were welcomed by Bishop Mohammed Naga, who lamented the poor response they received from the government. Nevertheless, he said the people have remained strong and hardworking despite government’s failure to provide adequate relief materials.

The bishops concluded their visit by handing over bags of rice, beans,  maize, and the sum of N5.5 million to support the work of caring for and rehabilitating the victims of insurgency through the Diocese of Maiduguri.