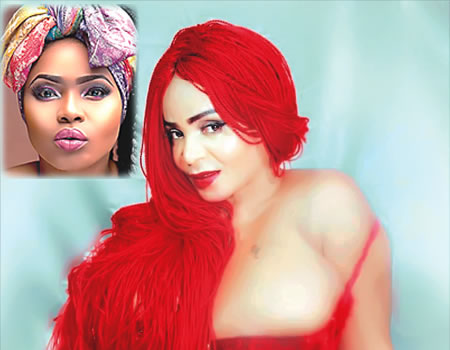 The end may not be near to the bitter fight currently going on between Cossy Orjiakor and actress Halima Abubakar.

While the social media may be buzzling with the news of Cossy and Halima’s feud that has dominated discourse for weeks, Cossy does not appear ready to sheath her sword as she keeps calling out Halima.

The busty actress had been hitting at Halima for weeks now. First, she allegedly called her a green snake and accused her of spreading false news that she had sex with a dog. She went on to caution Uche Ogbodo, a friend of Halima, not to have anything to do with the “green snake.”

Cossy also dragged Halima on social media platforms accusing her of being behind the negative news being peddled about her in the media.

Cossy responded to the user saying “ @umaengr Halima you don start your story again. No worries, say it to my face and collect beating wey go make you Kuja.”

She alleged that Halima was always hiding behind different fake accounts to spread false stories about her to smear her name.

Meanwhile, Halima appeared to have distanced herself from the current drama and travails of the busty actress, as she has kept mute on the development.

Efforts to reach her on phone and her social media handles proved abortive as she was not responding to calls and messages sent to her.

Why Christian leaders are afraid to confront government —Olubo