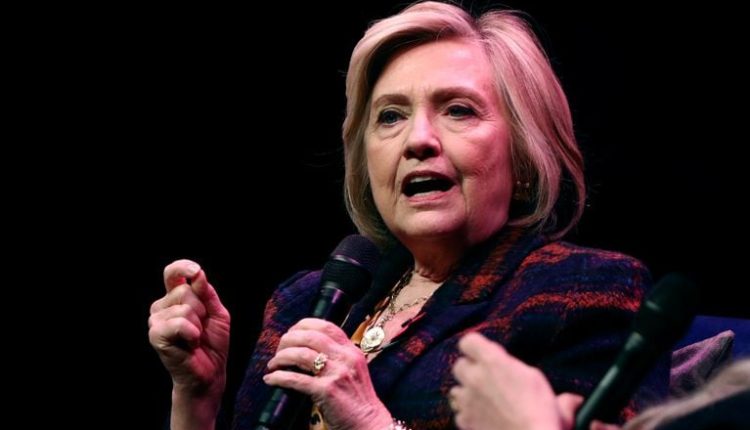 Hillary Clinton has said she is “under enormous pressure” to challenge US President Donald Trump in next year’s White House election.

The former Democratic presidential nominee refused to rule it out, telling the BBC: “Never say never.”

Mrs. Clinton, 72, said she thinks “all the time” about what kind of president she would have been if she had beaten Mr. Trump in 2016.

Seventeen Democrats are already vying to lead the party in 2020.

Speaking to BBC Radio 5 Live’s Emma Barnett while in the UK on a book tour, Mrs. Clinton was asked whether she would run again.

The former secretary of state, New York senator and US first lady replied: “I think all the time about what kind of president I would have been and what I would have done differently and what I think it would have meant to our country and the world.

“So of course I think about it, I think about it all the time. Being able to do that, and look, whoever wins next time is going to have a big task trying to fix everything that’s been broken.”

Pressed on whether she would throw her hat into the ring at the last minute, Mrs. Clinton said: “I, as I say, never, never, never say never.

“I will certainly tell you, I’m under enormous pressure from many, many, many people to think about it.

“But as of this moment, sitting here in this studio talking to you, that is absolutely not in my plans.”

Mrs. Clinton did not elaborate on who was pressuring her to mount what would be her third White House campaign.

The interview in London came as she promoted The Book of Gutsy Women, which she has co-written with her daughter, Chelsea Clinton.

The Democratic race is still largely up in the air even as the first of the state-by-state votes that will decide which of the contenders challenges Mr. Trump looms in Iowa in February.

The perceived vulnerability of one front-runner, Joe Biden, has spurred former New York Mayor Michael Bloomberg to take steps to enter the fray.

But the deadline has already passed to file on the Democratic primary ballot in several states, including New Hampshire, which also votes in February.

The filing deadline for Alabama expired last week, and the deadline for Mrs. Clinton’s former political heartland of Arkansas was on Tuesday.

Some of the 14 states that will vote on the so-called Super Tuesday in March have filing deadlines next month.

Political gossip about whether Mrs. Clinton might jump into the White House race continues to set tongues wagging in Washington DC.

Some of this speculation has been stoked by the Clintons themselves.

Last month when Mr. Trump goaded Mrs. Clinton to enter the presidential race, she retorted in a tweet: “Don’t tempt me. Do your job.”

At a Georgetown University event in Washington DC in October, former President Bill Clinton said of his wife, who was sitting beside him: “She may or may not ever run for anything.”

Election day is less than a year away now and the race to become the Democratic challenger to Donald Trump is hotting up.

The latest polling suggests Joe Biden and Elizabeth Warren are the front-runners, while Bernie Sanders and Pete Buttigieg are not far behind.