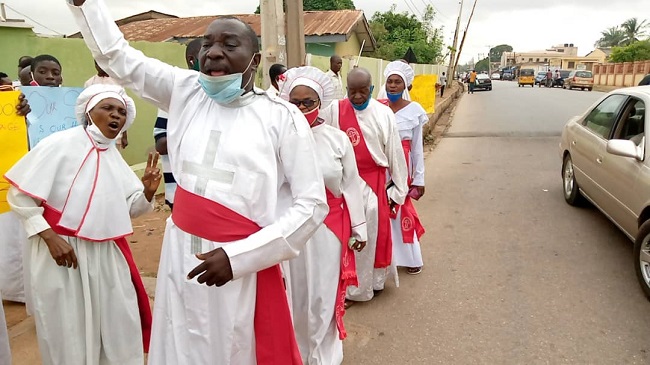 Secondary school students of the affected 10 schools in the hijab controversy in Ilorin, Kwara State have appealed to parties involved to sheathe their swords and reopen their schools.

This is just as educational activities are yet to fully commence in most of the affected schools despite the directive of the state government to resume classes, on Wednesday, after about a month of closure, as some churches have refused to reopen the schools.

The students, who lamented the likely impact of the prevalent situation on their educational future, including their relationship with fellow citizens, said that their preparation for the WAEC examination was already being affected.

Tribune Online gathered that some Christian faithful had prevented reopening of the schools, while they gathered in front of some of the schools as Cherubim and Seraphim school, Sabo Oke, Ilorin, singing and dancing.

Also, the load of laterite was also dumped in front of the school gate to prevent both teachers and pupils from gaining entry.

It was gathered that some teachers who obeyed the state government directive on resumption at Saint Anthony School, Offa Road, Ilorin, could not enter the school as the gate was locked up.

The vice-principal of the school later took the attendance figure of the teachers where they had gathered in groups discussing the situation.

The situation at Baptist School, Surulere, Ilorin, where crisis broke out two days ago was, however, peaceful as teachers gathered in groups inside the school.

It was gathered that students, especially, the female Muslim students on the hijab, later attended classes in the school, on Friday.

It is recalled that the state government, through the executive chairman of the State Teaching Service Commission (TESCOM), Mallam Bello Tahueed Abubakar, had, on Thursday, directed principals, teachers and staff of all the 10 schools shut down to report at their respective schools on Friday.

The TESCOM chairman had explained that the teachers’ resumption had become necessary in order to prepare the final year students for their external examinations.

Mallam Abubakar had said that any staff that failed to report to their duty would face the full wrath of the law as the government will not condone any act of insubordination.

Mallam Abubakar also warned all stakeholders against taking laws into their hands, stressing that peace meeting continued between the government and the stakeholders.

He also appealed to parents and the members of the public to remain calm as the government is on top of the situation since its meeting with stakeholders is still ongoing.

In spite of the huge investment in the water sector by the government and international organisations, water scarcity has grown to become a perennial nightmare for residents of Abeokuta, the Ogun State capital. This report x-rays the lives and experiences of residents in getting clean, potable and affordable water amidst the surge of COVID-19 cases in the state. Hijab: school children appeal. Hijab: school children appeal.