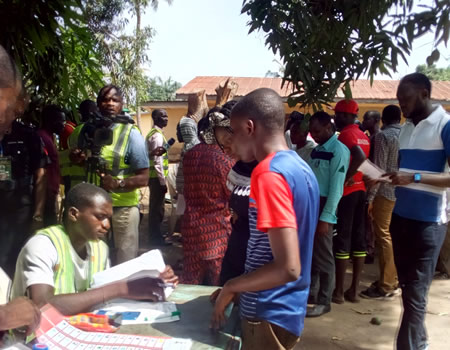 Share
In contradiction of the seeming apathy on the side of voters in Ogbomoso, the blind community in the town turned out en masse to perform their civic duties.
At the Nigerian Training Center for the Blind in Ogbomoso North, Ward 9, unit 13 A and B, there was a long queue of people dominated by the visually impaired who were being assisted.
The visually impaired voters trooped out in large numbers with their aids to cast their votes and were given priority and adequate attention.
From 8.00am, voting exercise started in the unit and till noon, the crowd at the unit was still massive, with the visually impaired waiting for their turn.

Speaking with Tribune Online,  Babatunde Joseph, a visually impaired political science student of Federal University, Oye Ekiti, urged the government to provide Braille for the visually impaired during elections so that vote without assistance in order to eliminate the risk of undue external influences.
He explained that the Braille was used during the gubernatorial election in Osun state last year, adding that the present system is low and is putting undue pressure on people with disabilities who have issues staying long hours on the queue and being assisted by people who may exploit their weakness.

Whether I lose or win, I am not under tension ― el-Rufai