High-altitude leadership: What the world’s most forbidding peaks teach us about success

Book Review
By Chris Warner and Don Schmincke On Jul 12, 2021 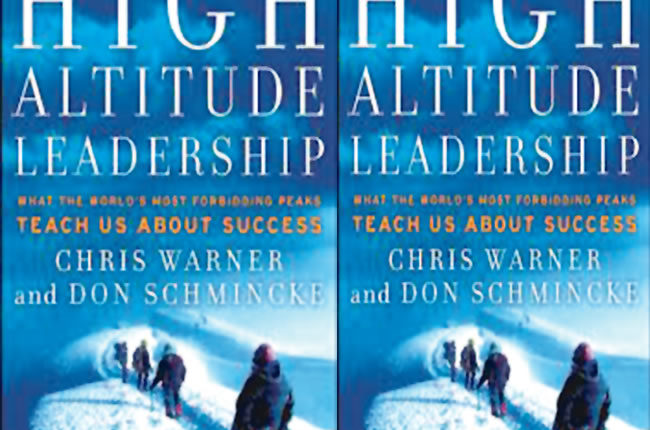 “An expedition is a journey of physical, emotional, and intellectual brutality that kicks the crap out of you and in which the opportunity for things going wrong is built into the formula. Seeking high altitude leadership also promises to kick the crap out of you,” the authors tell us in the introduction. This book is a collaboration of mountaineer, entrepreneur, and owner of Earth Treks, Chris Warner, and climber, author, and founder of The SAGA Leadership Institute, Don Schmincke.

The two men share experiences in the areas of climbing and entrepreneurship. After meeting on a climbing expedition, they discover that “the dynamics of mountaineering provide tailor-made metaphors for business challenges.” Warner and Schmincke team up to eventually deliver this trans-disciplinary book about business leadership intensified by working in the death zone. They define high altitude leaders as “those who lead themselves and their teams to produce peak performance in the face of extreme challenges by overcoming the dangers not foreseen or addressed by current popular leadership theory.”

The key lessons of this book derive from “the dangers.” There are eight; and they are each exposed in separate chapters that include case studies, survival tips and key learnings. Warner and Schmincke start from the obvious truth that “dangers threaten every leader at some point in their journey.” The significance of these eight dangers of leading is that they magnify as leaders climb higher, either up the mountain or up the corporate ladder.

Fear of death causes a leader’s mind to freeze up. When that happens, the leader is unable to take decisive action. Death is the ultimate danger to mountaineers. In the business world, death is not (usually) physical. Rather, it occurs with the demise of a great idea, a plan, a career—or it means company bankruptcy. Fear of death can be conquered; the way to do so is by embracing it.

Selfishness is the egocentric leader behavior that can politically poison a team. Think withholding information, playing favorites, or protecting sacred cow projects. Warner and Schmincke discuss the dangerous, unproductive, and dysfunctional (DUD) conditions that exist in companies as a result of selfish behavior. The recommended strategy for filling it is by creating passion in followers through telling of a compelling saga. The saga unifies, because it provides the team with something worth fighting for—to “die” for—and thus it increases productivity.

Tool seduction addresses the question, “are you using your tools, or are they using you?” This chapter exposes the high failure rate of implementing management fads, where tools replace the deeper work of adaptation to change.

Arrogance is apparent when leaders have so high an opinion of themselves that it will kill them. They fall into the metaphorical crevasse or they get backstabbed by their followers. “Arrogant leaders ignore warnings on mountains and in boardrooms.” They endanger themselves and their teams. The cure for a leader that is infected by arrogance is humility. But can an arrogant leader truly learn to become humble? Warner and Schmincke think so and provide some strategies.

Lone heroism is in evidence when a leader uses the mantra: “If you want something done right, you have to do it yourself.” Lone heroism causes weak teams, low accountability, misaligned direction, demoralization, and hostages. The resulting damage can be extensive. The remedy for lone heroism is partnership.

Cowardice encapsulates a leader’s risk-avoidance behavior. Cowardice propels leaders to seek safety instead of peak performance. The counterforce to cowardice is bravery.

Comfort leads to stagnation, and vice versa. Yet “great achievements sometimes require enduring extreme discomfort.” Thus Warner and Schmincke caution, “Don’t lead if you lack the willingness to be uncomfortable.”

Gravity is the last of the dangers; it has the capacity to kill a leader who did everything right. Gravity simply exists. Just like bad luck. It is a metaphor for environmental variables a leader cannot control. The only countermeasure for gravity is good luck. While a leader can sometimes get lucky by chance, luck can also be created through several proven techniques. A leader can maximize chance opportunities by being open to new experiences or by following a gut instinct. Another method is to visualize a positive outcome.