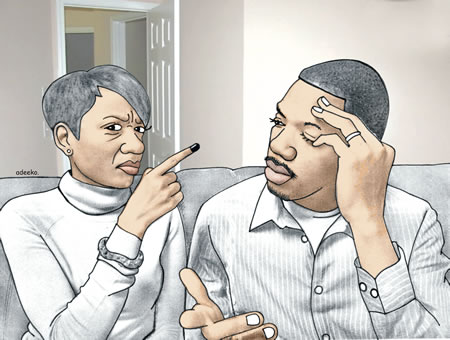 A businesswoman, Monsurat Ogundipe, has urged an Agege Customary Court in Lagos State  to dissolve her 14-year-old marriage to  her husband, Sheriff,  due to denial of sex  and  lack of   love.

According to the News Agency of Nigeria (NAN), the petitioner, who resides at Ijaiye Street, Abule Egba area of Lagos, told the court that she was no longer interested in the union.

“My husband is irresponsible; he is a chronic liar and has denied me sex for over two years.

“He is a drunkard, who drinks to stupor and misbehaves and this usually leads to shame and embarrassment for me and our children.

“I can no longer bear the emotional and verbal torture I suffer in his hands.

“My husband is fond of saying he is not going to send me packing  and that when l am tired, l will move out without being told,’’ she said.

The mother of three, who admitted that her husband does not beat her, claimed that the emotional abuse had been unbearable.

“My husband frustrates my efforts and brings in different women into our matrimonial home without any form of respect for me.

“All my husband does is to drink and engage in extra marital affairs.

“He is not caring and lacks respect for the institution of marriage; please separate us, I can no longer live with him,” she told the court.

The respondent admitted that he denied his wife sex.

He also urged the court to dissolve their marriage, claiming that he no longer love his wife.

“I try my best to cater for my family but my wife is never satisfied,” he said.

The respondent also described the petitioner as arrogant and unwilling to be submissive to him.

He further admitted that he was engaged in relationship with other women because his wife refused to have sex with him.

“She wants to usurp my authority in the house and has no respect for me.

“Trouble started when my younger sister came to stay with us; my wife declared that she would not have sex with me until my sister leaves the house.

“For six months, my wife refused to have sex with me which led to my drinking habit and since then, l  have lost interest in her,” he said.

The respondent also alleged that his wife was promiscuous, claiming that she often received strange calls and text messages from different men at odd hours.

He alleged that one of his wife’s concubines also laced her with magun.

“I discovered this through prayers, if not I would have been dead.

“I don’t trust my wife and I no longer love her, l , therefore,  urge the court to dissolve the marriage so that we can go our separate ways,’’ he said.

The court president, Mrs Ibironke Elabor, advised the couple to keep the peace and adjourned the case till July 26.