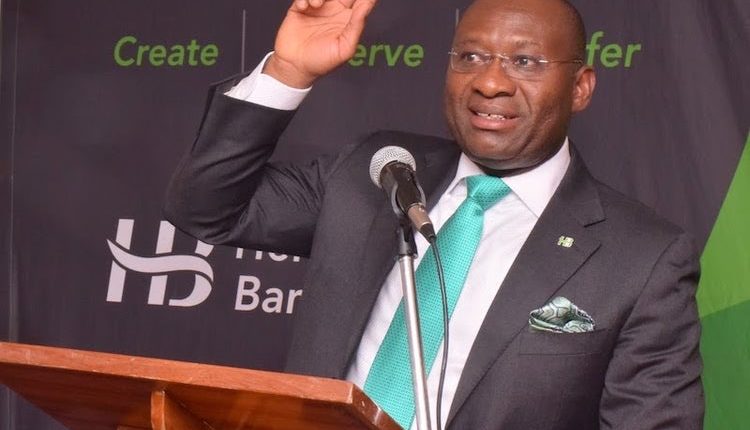 Today, one of the fastest growing financial service providers in Nigeria, Heritage Bank Plc, is celebrating 7 years of its existence.

Established with an excellent service culture hinged on partnering with customer to create wealth, the lender has continued to provide seamless banking experience, accurate and relevant information to its customers across Nigeria.

For Heritage Bank, it’s been seven years of creating, preserving and transferring wealth to its teeming customers across the country.

A story began on March 4, 2012; a story of hard-work and determination when IEI Investments Ltd acquired Societe Generale Bank of Nigeria license from the Central Bank of Nigeria, CBN, after meeting all requirements by Nigeria’s apex bank. Heritage Bank Plc was born and began its operations in Nigeria as a regional bank on March 14, 2013.

After acquiring the license and structure of the old Societe Generale Bank of Nigeria which was closed down by the CBN for failing to meet the new capital requirements of N25 billion or $155 million for a national bank in January 2006, Heritage Bank returned 100% of existing SGBN account holders’ money which were frozen at the closure of the SGBN.

This move brought a lot of smiles to the faces of former account holders with majority of them having confidence to continue to bank with Heritage. This was the beginning of a success story of a man bank that was dead for 10years before it was resurrected by Mr. Ifie Sekibo and his team.

Heritage Bank which entered the market just a year defied all banking tenets and was able to withstand the might of top established players like Access Bank, Fidelity Bank, (then Skye Bank – now Polaris, Diamond Bank – Access) and others to win the bid for the acquisition of Enterprise Bank which also saw it inherit over 160 branches, over 177 ATMS, and 2000 POS terminals spread across major markets and commercial centers in the country. This move automatically transformed Heritage Bank from a regional bank to a national bank.

Still, as big a move as it was, it remained just one of the many strategic moves to change the banking industry and Heritage Bank has made a lot of them since it began operations in 2013.

With a management focused on innovation and a unique philosophy to create, preserve and transfer wealth to its customers, Heritage Bank found itself in a fiercely competitive banking environment but it remained guided by passion, resilience, innovation and a brand architecture that exuded quality service, performance and sheer excellence.

Heritage Bank introduced a zero Cost of Transaction to its customers in April 2013, implying that there would be no hidden charges as it continued its quest for 100% customer satisfaction. Heritage Bank also set a standard when it launched its pilot ‘Corner Shop’ to cater for traders at the Gbagada Plank Market in Gbagada Estate, Lagos to ease banking. The ‘Corner Shop’ was widely received and appreciated by the Gbagada traders as it saved them the time and money to visit a bank branch kilometers away.

Heritage Bank was not done yet. The bank went further to prove its trend setting profile by introducing Nigeria’s first pioneer portable POS solution named ‘PortaPOS”. The Heritage PortaPOS which is free to all Heritage Bank customers can accept all EMV chip and PIN cards, MasterCard, Verve and Visa cards. It is portable and light as a regular mobile phone and has a long lasting and rechargeable battery. It also syncs to phones and printers via Bluetooth technology!

Heritage Bank has found its feet quickly on the floor of the Nigerian Banking sector and recorded over 200% increase in the number of customers since 2013. It remains committed to its customers and continues to search for new heights to attain in the Nigerian banking sector and that is why the bank is considered the fastest growing bank in Nigeria.

Amid the bank’s audacity to dare and succeed, industry watchers have continued to ask; how are they doing it? The answers may not be far from the fact that this is one bank whose leadership team continues to exude the charismatic Midas touch of Ifie Sekibo and his team that has proven repeatedly that whatever he touches turns into gold.

Over the years, the Central Bank of Nigeria (CBN) had tried to encourage the profit-oriented banks to take financial services to the next level by reducing their focus on the Oil and Gas sector but rather focus on SMEs, Agriculture and Mineral Resources among others that will drive the Nigerian economy.

As a bank that knows his onions, Heritage Bank Plc in partnership with African Export-Import Bank and Zamfara State Government signed a Memorandum of Understanding, (MoU) worth $1billion aimed at exploring the enormous resources in the state’s which includes Mining and Agriculture, a development which is a fundamental shift from the Nigerian banking services.

Perhaps, the $1billion MoU is the largest deal any state and a financial service provider has ever entered in Nigeria. So, it is considered an audacious initiative which Heritage Bank, a relatively new but highly innovative and daring bank is part of. The MoU is addressing the missing link in making a big deal out of the massive opportunities in the Zamfara mining and agriculture.

Speaking during the signing of the MoU in Abuja, the Managing Director/Chief Executive Officer, Heritage Bank, Ifie Sekibo, said the collaboration among the institutions would promote and fast-track activities that would help Zamfara explore its untapped resources for the benefit of its people and the nation’s economy.

The initiative, he added, would help unlock massive opportunities inherent in solid minerals and support efforts on local content promotion, facilitate industrial development and export development. Sekibo, explaining Heritage Bank’s involvement in the partnership, said, “It is a game-changer that will drive formidable economic growth for the state government and will serve as a backbone to the economy through job creation.”

Support for ICT Hub in Africa

As part of its efforts to support Nigeria’s aspiration and roadmap to become a leading Information Communication Technology (ICT) Hub in Africa, Heritage Bank doled out the sum of $40, 000 grants to winners of the maiden edition of HB Innovative Lab.

The maiden edition of Heritage Bank Innovation Lab Accelerator programme (HB-LAB) tagged, ‘Demo Day,’ is a 12-week programme, expected to provide technology start-ups seeking additional investments to progress and accelerate market introduction/adoption of their solutions with co-working and internet resources, guidance and mentorship with finch start-ups founder and seed funding. However, the bank’s commitment is to create enabling environment, resources and support required to innovate and accelerate impactful solutions with the potential to radically improve financial Inclusion/Intermediation, health, automobile, agriculture, and other related problems affecting critical sectors of the economy.

At the grand finale of the programme, Trep Labs-Real Drip emerged the winner with the most compelling solution won the N10million, whilst Ladipomarket.com.ng won the sum of N5million prize, as the 1st runner-up, which is equivalent of $40, 000.

Speaking at the event, the MD/CEO of the bank, Ifie Sekibo, said the bank knew it was in the best interest of the country to pay attention to the development of technology and industrial sector as the future of the country lies in the hands of its youth.

He noted that although in Nigeria, technology startups still account for a relatively small share of all businesses, but they have an outsized impact on economic growth, because they provide better-paying, longer-lasting jobs than other start-ups, and they contribute more to innovation, productivity, and competitiveness.